It slipped by me in 1999. Decades after, I finally witnessed Charles B. Pierce’s vision. What there is of it. Look At Me: The Movie. With Bigfoot and Son. Pierce has a fondness for narration. Noteworthy in The Legend of Boggy Creek (1973) and The Town That Dreaded Sundown (1976). Vern Stierman voiced those and as annoying and obvious as he was Pierce trumps him as his own narrator in The Legend Continues (1985). Throw in Pierce directing, producing, starring, and lighting the set, it dawns on you he’s doing too much. “TOO MUCH!!!” Heavyhanded, cloying, patronizing, the flick wags its finger constantly and lectures you nonstop. Potatoes, the madness of flashbacks, Bobo as The Monster of Forrester. “Can I borrow a cup of shirt?”, “Really, there’s too much piercing in this movie”, “We’re goin’ camping, and you’re gonna watch.” “Rich Man, Poor Man font” or “the legend continues… to be not heard about, by anyone”? 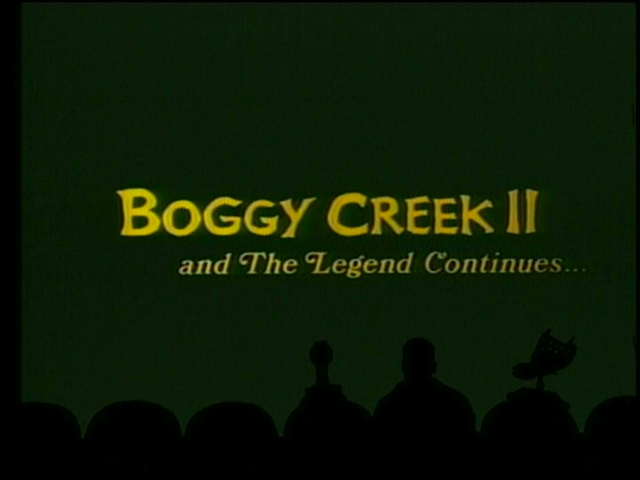 This film is in the MST3K sweet spot. Competently made, a plot you can follow, annoying characters, random diversions with the backstories, and all the fanservice you can handle with the appearance of Old Man Crenshaw towards the end of the film. I particularly like the bots getting all worked up for the mud wrestling scene only to be immediately disappointed.

“Sorry, I gotta take my shirt off and go make a movie with my dad and new mom.”

“Can I borrow a cup of shirt” will always be a favorite riff of mine.

Truly, a movie that……just is.

YES! This is one of my all time favorites. Cup of shirt, hail of bullets, “where’s the money you son of a bitch?!”, so manu great riffs in this one. The desire for wrestling, the painful narraction, Tim, oh so many things wrong but so right with this one. Would it kill this kid to do a pushup? I could go on…

Meh. For me Boggy Creek 2 just didn’t land. I consider it to be one of the show’s weaker episodes. Movie is dull as dirt, episodic, and somewhat vainglorious for the star/director. The riffing is OK but nothing really sticks out to me about it. 3 out of 10.

I love this movie, and I can’t get enough of the riff! This is one of the few “scary” MST3Ks I would listen to when trying to sleep for the year I had insomnia, in part because it is just so ludicrous. Almost every part of the movie is a riot of cheese, and nearly every riff is gold. Bill singing is pretty much a sign of a great episode. Kevin sings just fine, but if you hear Kevin singing that just means it is one of the bazillion episodes Kevin is in.

This is one that had to grow on me. The first few times I watched it, I really wasn’t all that impressed, but gradually, as I gave it more chances, it became one that I have a real fondness for. There’s just something friendly about this movie.

…I’m not sure that friendly is the right word but there’s just something about the combo of the movie and the riffing that is just right.

There’s just something friendly about this movie.

…I’m not sure that friendly is the right word but there’s just something about the combo of the movie and the riffing that is just right.

“Warm”, perhaps? I think I see what you’re getting at, there’s a kind of warmth to the whole experience that just works.

What really hits me about this film is its pacing. It’s leisurely, but not glacial. And even with the peril sprinkled throughout, it never seems too dark or oppressive.

That, and the material throughout is a hoot. Riff-wise, I’m fond of:

The easygoing nature of the film/episode makes for a good nighttime watch, I find.

One of the best performances in any MST3K movie is Jimmy Clem as Old Man Crenshaw. He really put everything into his performance and is easily the best thing about this film.

“I saw the Little Creature” will forever be among the most unintentionally funny lines of any movie on MST.

“From the Royal Academy of Dramatic Arts… Jimmy Clem.” 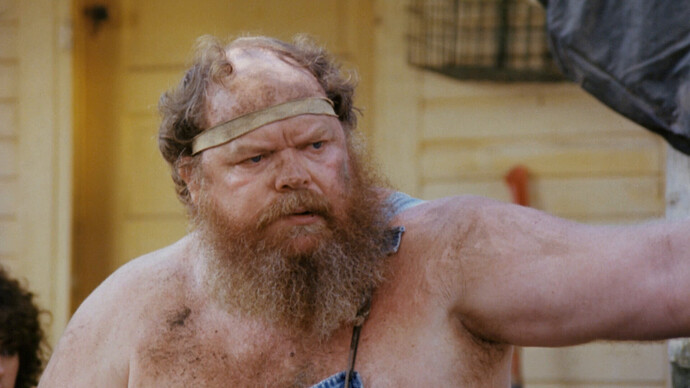 Is that a rubber band around his head or just soiled cloth?

If it’s a rubber band, what purpose does it serve?

The first time I saw this one was after I purchased Rhino volume 8. My wife and kids were away visiting family and I had a whole weekend of Mst3K! This was my first choice and I have no regrets! Another season 10 classic!

She springs into action, it’s a poop emergency!

The “mad dog” was a real thing in the actual movie. He attacked Lockhart and Tim.

And of course Crenshaw! In some episodes they seem to be running out of steam until a crazy new character is introduced! Think Mike Pipper or Dablone. Here it’s Crenshaw! He really saves the latter part of the movie! Overall an above average episode!

This film isn’t as over-southerned as Squirm. Also, I honestly like some of the scenery. I wish Elder Pierce had made us a nature documentary instead.

To this day, I have no idea what the backwoods wife was saying to her husband when she had to hose him off after the outhouse… incident. And I’m still afraid to turn on the CC’s to try and find out.

I’m not sure whether I’d rank this one as middling but fun, or higher. I’d have to think about that. But it’s definitely an easy and diverting watch.

For people with a genuine interest in cryptozoology, movies like this must be infuriating. It’s true that the title critter (in this case an ape-like creature that resides in the Arkansas wilderness) is treated as being real. But the portrayal of the investigators is not what you would call flattering. First and foremost is the pompous bore anthropology professor who leads the expedition. Even more grating is Leslie, a vacuous tagalong with Eighties Hair for whom the concept of roughing it is completely alien. Then there’s Tim, who is frequently shirtless even though his physique is not suited for the look.

But for a sight guaranteed to provoke an Oedipal reaction, there’s Old Man Crenshaw, a bloated mountain man they encounter who wears overalls without a shirt and one strap undone. Looking back, it’s surprising there were no Deliverance riffs. There are also several flashback scenes recounting encounters with the Boggy Creek Monster that often use a soft focus. The least pleasant of these is a “humorous” tale that involves an outhouse. And that’s probably more than anyone who hasn’t seen it yet would care to know already. On the plus side, the creature suit is quite well made. Especially when you consider the limited resources typical for an indy production like this.

The fist Boggy Creek movie is actually a documentary, which kind of disappointed me the first time I saw that after seeing the MST episode a number of times.

I can’t watch part of this. Anything to do with toilets and bathrooms disgusts me to the point that I can’t watch.

One of the best Razorback promotional films ever

One of the best Razorback promotional films ever

Are they proud of that? 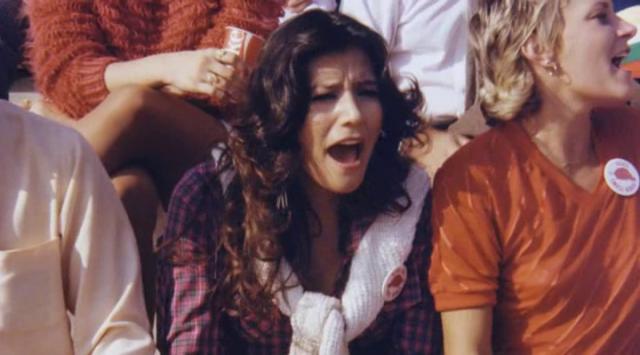