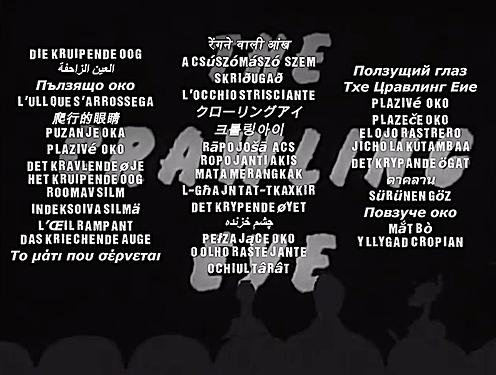 I was all about to be like I love The Crawling Eye. Reminds me of one of the Hitchcock movies from the 30s!

Mmmm…I’m gonna be keeping a close watch on this thread, I tell you what!

But I dig the international flavor of the thread! Very cosmopolitan indeed!

I say it stands!

Maybe the best episode of season one, but what the hell was that! A good cheesy film with Alan Hale Jr. And Allison Hayes! Probably my favorite season one ep.

What better way to start the national series than with an alien invasion movie? Except this may not have been the first episode to be aired, as the documentation is a bit sketchy. Aside from taking place at a resort town in the Swiss Alps, it’s typical of the genre and hits all the standard beats. The audio is terrible, though, and you really need to crank up the volume to have any idea of what’s being said. This may explain why Anne getting paired off with Truscott at the end seems to come out of nowhere.

There are a few recognizable actors in the films, with the most familiar being Forrest Tucker (Sergeant O’Rourke on F Troop). Hard core fans of British television might notice that the observatory professor is Warren Mitchell, who was Alf Garnett on ‘Til Death Us Do Part. For those giving blank stares, that was the show All in the Family was adapted from, with Garnett being the inspiration for Archie Bunker. Then there is Janet Munro. It took me several years to realize that I had seen her before as Roberta in the 1960 film version of Swiss Family Robinson.

As is typical for early Season 1 episodes, the riffing is both sparse and tepid (though having the riffs being scripted is still an improvement over the scattershot improvisation of the KTMA era). But once the titular monsters show up in the final quarter, the eye puns come fast and hard.

Watching this on the Gizmoplex right now. Is it super quiet for anyone else, or is it just me going deaf?

Like, I’ve got the teevee turned up way louder than normal. I normally have the volume at about 40, and I have to turn this one up to 55.

As I noted in my prior post, the movie’s audio is not that good. Perhaps that’s the issue, unless you’re having trouble with the host segments as well.