I find that this is one of those mood episodes where it doesn’t always work, but when you’re in the mood for it, hot damn, it connects.

*except The Castle of Fu Manchu

What helps to elevate this one over Invasion is the presence of that Phantom Creeps short. The gang imitating Bela Lugosi NEVER fails to amuse the hell out of me (Servo as Bela on the subject of using invisiblity: “This is great! I can pick my nose and sing to the radio and no one will see me!”). That, and even though it’s a serial and not a standalone short, it still accomplishes exactly what you need a short to do: it gets in, it gets riffed, it gets out. And it packs in some great humor in the process, like Joel taking a guy to task for shooting a robot spider: “Oh, be proud, you shot a spider. Thank you, John Goodman.”

If I have an issue with Rocket Attack U.S.A.. it’s that it’s a dour, downbeat kinda movie with a sorta darkness that threatens to smother and overwhelm the riffs.

When that doesn’t happen, like with, oh, say, the restaurant scene with the dancer (Servo as dancer: “Now this is my interpretation of the special for the evening…”) and the fire eater: (Crow: “I can’t believe this guy made it on Letterman”).

Even the over-the-top ending with the climactic nuclear attack has some wonderful humor that arises in the face of grim subject material. It’s like we’re watching a classic MST3K short where the gang lets it all rip with amazingly dark comedy (Servo on a pizza customer in the face of an impending nuclear assault: “Hey, the cheese is cold, think you could NUKE this for me?”).

But a lot of the stuff in between is… oof. It’s rough. Like the character of Tanya and everything that happens with her. Yeah, they try to lighten the mood with stuff like Crow ventriloquizing our alleged hero Johnny to tell Tanya what she tastes like after having to mack it with a defense minister, but it goes a bit rough, as does the scene where our protagonists are killed.

It sounds like I’m giving this episode a negative review, and that’s not the case at all. You have some fun comedic moments, but the balance with the darkness is a bit off. You have to be prepared for that, and if you are prepared AND in the mood for that, then it’s more of a fun ride [gestures to Joel’s lengthy prank call riff].

I agree! They’re all good! (Fu Manchu) the exception. This one is okay for season two. Not a favorite, but even my non-favs are still good. The ending? We’ll, it kinda sucks. But Joel and the Bots give it a good effort.

At first I was like, “Yeah, the one with the weirdo swirling brandy! That had as much drinking as Killer Shrews! Cool episode!”

And then I was like, “Huh? What? I don’t remember this one at all!”

And then I was like, “Dude, I should probably watch this one again!”

Thanks to the magic of the stalwart @BruceLeePullen!

Is my “brain” atomic and unbeclouded? No, but now I know the secrets of the elders.

“A Date with Your Family” IS a very solid short. Good call there!

I agree! They’re all good! (Fu Manchu) the exception. This one is okay for season two. Not a favorite, but even my non-favs are still good. The ending? We’ll, it kinda sucks. But Joel and the Bots give it a good effort.

It’s, like… for scope, The Robot Vs. the Aztec Mummy is probably my second least favorite episode of the series after The Castle of Fu Manchu. But I actually kinda dig it because it feels like they’re putting in an effort there and also doing some neat joke experimentation stuff.

All that to say this: they did put in an effort here on Rocket Attack U.S.A., and I applaud the hell out of that. The movie may skew a bit too dark at times, but when they can override that? Magic.

It seems they were making an effort to really try a wide variety of genres in Season Two and a Cold War Propaganda piece is certainly a bold choice. I have to agree that it’s a brutal watch but it definitely has some funny moments here.

Servo’s “haircut” is just weird. It’s hard to not notice it.

But, it has some lasting legacy: It kicked off one of my favorite running aspects of MST3K: The Stinger! And what a moment to start them with!

Plus, it gave us some more goodness that is The Phantom Creeps! The “FORD BEEBE!!! FORD BEEBE!!!” thing never fails to get a giggle out of me!

If there’s somethings every single episode has in common: They have funny moments and something positive I can say about them!

I would consider The Sidehackers one of my least favorites, but I can still find nice things to say about it. (The first half is great, the songs are wonderful, Cambot gets in a riff!)

No matter which one I choose to watch, any MST3K is always a good thing!

But, it has some lasting legacy: It kicked off one of my favorite running aspects of MST3K: The Stinger! And what a moment to start them with!

The stingers are among my favorite things about MST3K, and the first is still one of the best!

Say whatever you will about the movie, but the host segments lie on the strong side of the spectrum. 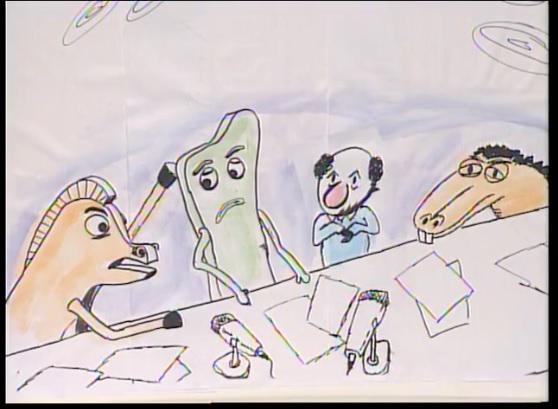 The Charlie McCarthy hearings sketch is fantastic for those drawings Joel hauls out, like this Gumby one. 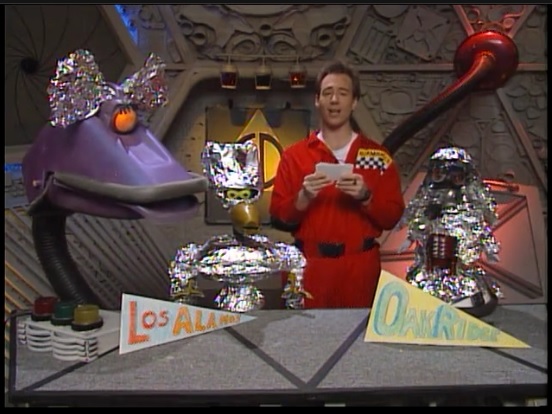 The Civil Defense Bowl is gloriously, amazingly dark, and I’m ALL HERE FOR IT. 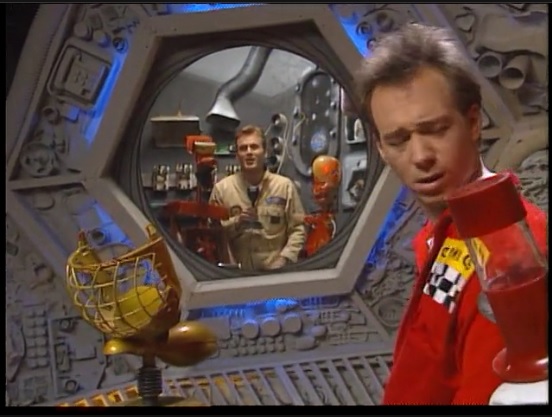 It’s hilarious to see Mike in an early role as Joel’s Russian counterpart. 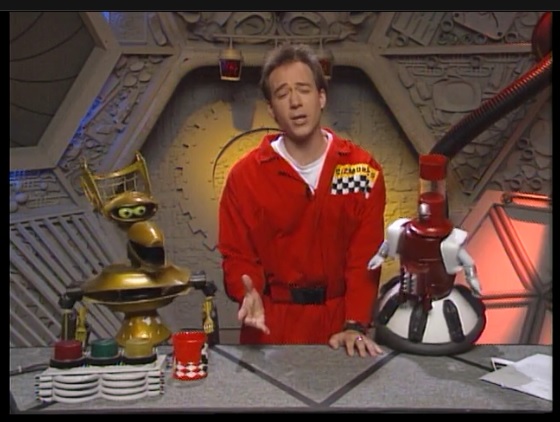 And of course, you can’t forget the topper here with Joel and the 'Bots freaking out on the Mads over that movie’s grim nuclear fondue conclusion!

It kicked off one of my favorite running aspects of MST3K: The Stinger! And what a moment to start them with!

Only slightly related to this…I wonder why an episode that came after this one, “Wild Rebels”, didn’t have a stinger. Just seemed odd to me.

But yeah, this movie…Season 2 had a few dour ending movies didn’t it: Rocketship X-M, Sidehackers, this one. Probably the closest thing to the show shwoing how a real life version of the experiment would go (only there’s WAY worse movies they could have used if they weren’t just going for comedy).

We’ll get there. I promise. A topic I’ve wanted to do.

Well. I couldn’t follow one single thing about this Phantom but it’s still good riffing. “Zis vill zimplify eeeeveerrting!” And of course! “Ford Beebe! Ford Beebe!” I still don’t like the serials, in general, but better than a sharp stick to the face.

Ohhh…I remember this one…seeing the guy’s blonde “contact” brought it all back to somewhat unpleasant memories.

So, since this movie wound up being a vault pick, I want to point out a particular riff: the dude being labeled as “a grown up Doogie Howser”. Why does it feel like everybody in the 90’s had no idea what Neil Patrick Harris was going to look like?

Has anyone ever noticed that this film is pretty much the same as Invasion USA?

No, Rocket Attack U.S.A. had the cajones to make the nuclear destruction a reality rather than have a “It was all just a dream” copout ending.

Also, Invasion U.S.A. tacks on the additional moral lesson of “if you don’t devote your entire life and business to fighting communism, they will take over and destroy us.”

Rocket Attack is …certainly a movie, I’ll say that.

Each year Hollywood makes hundreds of movies, and this was one of them!