Gonna’ rewatch this just to see if I can figure out why that poor girl who only cared about chewing gum and/or trying on stockings had to be killed in cold blood. Maybe the reason got lost in the episode edit or maybe it was just a day in showbiz which ended in a “Y.”

@optiMSTie Which is the superior biker episode? This or Sidehackers (1969)?

@optiMSTie Which is the superior biker episode? This or Sidehackers (1969)??

Sidehackers had the better host segments BY FAR.

And that came out of necessity. By the time of The Hellcats, most of the writing team was out of town for that episode, so you had to have those flashback sequences to past host segments.

Which were handled well (Crow’s singing of that Hellcats theme is the damn funniest thing, and it’s great to see J. Elvis’s Servo one more time in the classic era), but the host segments can’t hold a candle to Sidehackers.

Still, we have two gold moments: that group hug at the end, and that “NOOOOOOOOOOOOOO!” moment during the Invention Exchange that gave us a GREAT blooper. The final cut that we saw? They cut away THE ABSOLUTE INSTANT that Frank eked out the line “I don’t fink on soul brother” because Trace was totally going to lose it once again.

By the way, has anyone translated what that guy says in the clip that was used in the stinger?

@optiMSTie Which is the superior biker episode? This or Sidehackers (1969)?

For theater segments? They run close in terms of hilarity, but I give the edge to The Hellcats, because Rita’s fate in Sidehackers was godawful, and you felt the sting of that throughout the rest of the episode. Not to mention THAT ending.

The Hellcats, while not an easy or unyucky (for lack of a better word) film to get through, feels easier to traverse. That leads to not only better riffing, but a lighter viewing experience overall.

But again, that trip out of town for the writing team can be felt in the theater, too, with a final third that’s noticeably looser than the stronger two-thirds that preceded it.

I can’t tell if the leading lady is terrible on her own of if they compound her issues by having her dubbed by someone who’s also wooden enough to be a project in the Industrial Arts short. Her only emotion is sounding irked rather than devastated at supposedly life-shattering events. Housewives in ads about ring-around-the-collar put more into it than this. Or maybe they didn’t really write her a part at all but told her to just improv. That would definitely help explain the constant kvetching.

If this turkey had been made 5-10 years later, she might’ve been the nominal hero of the movie: going out on her own to avenge her fiance but then probably meeting a way worse end. At least in this scenario, she doesn’t die, or have to marry Ross.

What strikes your interest? Is it just the eyepatch or the fact you can’t remember it?

Lol. I forgot all about the two Dr. Seuss homages. Just far enough apart so that you’ve forgotten the first one by the time the second one rolls around. Mwah!!

Let’s talk Tom Hanson! He was in two movies. This one as the biker J&TB called Kooky, and in Red Zone Cuba as Chastain. He also produced and directed the movie The Zodiac Killer, which became a cult favorite. He also ran a chain of chicken sandwich franchises (not Chick-fil-A) in the 70’s! He’s also the best thing this episode has going for it. I consider this the second best of the biker movies. Not as good as Wild Rebels. But better than The Sidehackers. I do actually like the soundtrack in this movie. Best Brains did mess up on this one though. They kept referring to the director as the guy played by Nick Raymond. But it was Bob Slatzer that directed and produced this movie.

When I got the end of the re-watch yesterday, I realized that she did have more of an active part in the story than I remembered. I guess that’s… something. (I still had to go look up the character’s name again, though. It’s Linda. Another biker Linda. lol.)

What can I say? In the post-Asylum and/or Things world, I guess my bar for what makes a movie a slog got, uh… dramatically moved…? Yeah.

I do like how Joel and The Bots spend the entire episode in their robes. I’ll give the episode that! 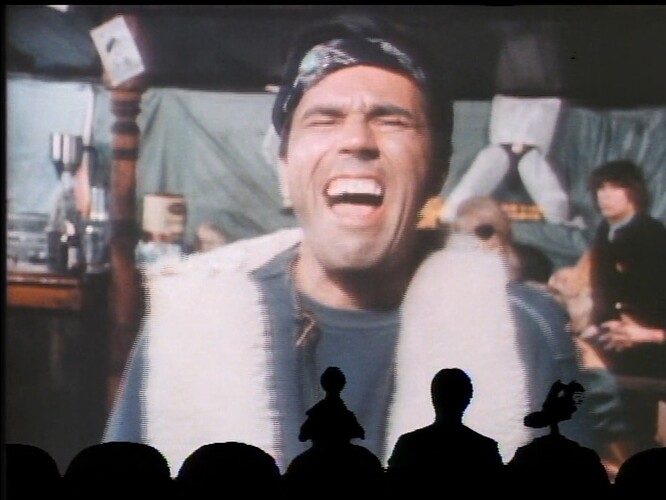 “I DON’T MIND TELLING YOU, HE LOOKS A LOT LIKE GILBERT GOTTFRIED.” - Joel, imitating Gilbert Gottfried

You know what I love about this episode? Whenever they riff on the musical sequences.

That gives them a lot to work with, like the Mass Confusion song (“Mass Confusion? They’re describing the plot!”) or that scene in the bar where the riff gang keeps identifying the different bikers: “And there’s more! There’s Jingo, and Baby Burlap, and Fleegle and Beagle and Drooper and Snork, and uh-oh… it’s the stinky guy!”

When Crow interjects with “lots of things with ‘-i-o-n’” or similar, this is invariably where my mind goes: 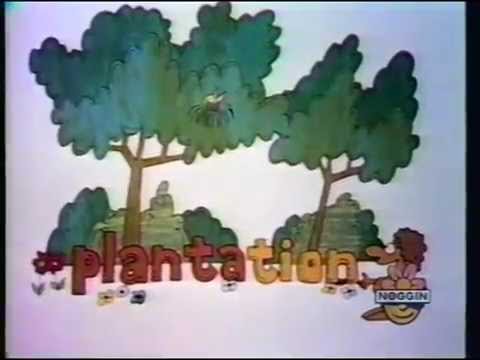 When Crow interjects with “lots of words with ‘t-i-o-n’” or similar, this is invariably where my mind goes:

ou know what I love about this episode? Whenever they riff on the musical sequences.

That gives them a lot to work with, like the Mass Confusion song (“Mass Confusion? They’re describing the plot!”)

I love all of the Ross Hagen riffs in this episode. For some reason, the one that always makes me laugh is:

I love all of the Ross Hagen riffs in this episode. For some reason, the one that always makes me laugh is:

It’s what they excel at. 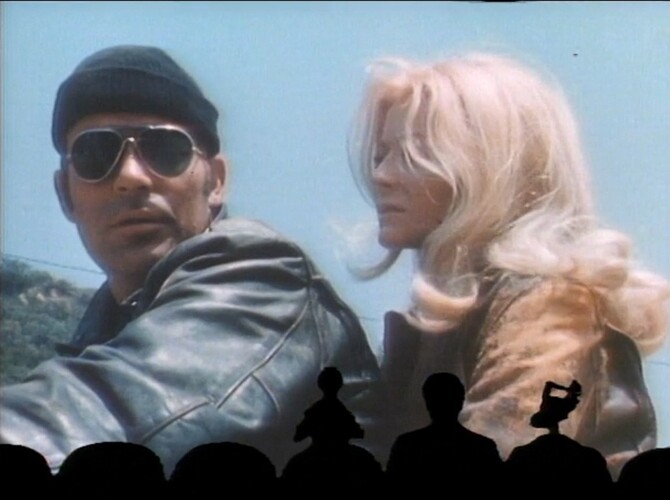 @amass79 Your mileage on the biker experiments? 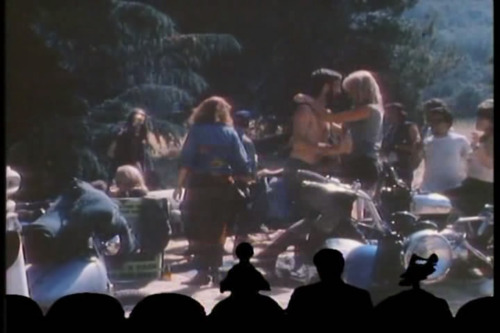 I really enjoy all three of them. As dark and nasty as Sidehackers is, I still really enjoy that episode. Wild Rebels is just hilarious; it’s one of my first Favorite Episodes. I think Hellcats is the worst movie of Season 2, but it’s so silly that Joel and the Bots make make it really funny for the poor viewers.