This one is a lot of fun. It’s really fascinating to see the Gamera series at it’s very beginnings and see just how vastly different it started.

Great riffing and great host segments (anytime Kevin Murphy gets to sing is alright with me!). This is another winner!

That’s a great trilogy there! Season 3 was really starting off with a bang!

That’s a great trilogy there! Season 3 was really starting off with a bang!

That jumpoff impressed me too. The launch of Season 3 hit the ground running and Episodes 301 and 303 are program standards.

A real watershed moment for Mst3K! Doing FIVE movies from the same franchise. And this one started it all. A terrific episode. The Tibby skit is an all time great, the riffing is excellent, and this movie indoctrinated them to the bratty Japanese child that always seems to be in control. And what’s with the Japanese fascination with the name Ken or Kenny? Anyway, this one is lots of fun. The Gamera episodes are truly interwoven with Mst3K.

There really is something special about this series of movies.

Godzilla is great and I’m happy they were able to do a couple but Gamera just feels more “ours”.

They went there. Fantastic.

They did something similar when one of the Bots said, “Remind you of anything, Joel?”

AND Joel threatens to sue the Bots for singing his theme song!

@optiMSTie Has this episode aged well? Have the later Gamera shows overshadowed it?

As far as aging goes, I’d say it did so well, yeah. It’s still as funny and accessible as it’s ever been, and even though the later episodes are in color and jam-packed with wackier lunacy, I’d still argue that the OG Gamera makes for a better episode experience than Gamera Vs. Barugon, in which Gamera pretty much has a glorified cameo.

What the movie lacks in later franchise wackiness, though, the episode makes up for with strong writing that keeps this installment engaging.

For me, the jokes about Kenny flying on the dark side of things? SPECTACULAR. There’s one great comedic part where he’s lying down, and one of his parents is calling for him, and one of the riffers (Servo, I think) says in a demonic voice, “GO AWAY.” And it makes me laugh so damn much.

Everything they do in the episode to make Kenny look like a turncoat who’s conspiring with Gamera against humanity is wonderful.

Really, this episode can skew dark, and that dark humor is head-over-heels hilarious, as it is with the best shorts. To give some example:

Crow as Gamera: “Those kids at school — they tease you, Kenny… because they’ve never tasted Hell. Today, we turn the tables!”

Woman to Kenny: “Why are you carrying [stones] around with you, Kenny?”
Joel as Kenny: “To hurt people. Life hurts me, so I hurt back.”

Teacher: “The other students make fun of him. They think he’s strange.”
Crow: “Kids are perceptive that way.”

And also, the singing of that demonic theme from The Omen over a shot of Kenny is [STANDING OVATION]

What also adds to the fun vibes here is Servo’s love for Tibby (as we see in the host segment, which I’ll get to in a bit), which carries over into the theater, and Crow zeroes in on his vulnerability.

[as Kenny runs around looking for Tibby]
Crow: “SQUISH! Oh, Tibby!”
Servo: “That’s not funny! Joel, tell him to stop!”

Joel gets more than a bit cranky here, too, with a penchant for tearing off Crow’s arms in the face of bad puns!

I have to wonder if this was some kind of meta-commentary about how things went in the writing room?

For me, this isn’t the best Gamera episode, but it IS the best Gamera movie, which does something to contribute to the watchability factor in one way. I like the black-and-white cinematography, and it has this feeling of drama and dread that doesn’t come through quite as strongly as it does in the other Gamera movies.

You also have to love this for kickstarting the Sandy Frank era in Season 3.

Servo: “Hey, Sandy Frank. Isn’t that when you drop your hot dog on the beach?”

And it only gets better from there!

To take a look at the host segments, “Tibby, Oh, Tibby” is the star attraction by a country mile.

It’s a fun song along a number of wavelengths: the silly extremes that Servo sings about this turtle, Crow commandeering the song lazily, Servo throwing a tantrum, and Joel’s funny faces RIGHT AT THE VERY END.

We can’t overlook the host segment where Joel encourages the use of a positive attitude when he sees the Bots performing voodoo on his Jim Varney voodoo doll, only for it to end the only way it possibly could: with a timeout for Crow. (He got a lot of those over the years, didn’t he?)

We can’t overlook the host segment where Joel encourages the use of a positive attitude when he sees the Bots performing voodoo on his Jim Varney voodoo doll, only for it to end the only way it possibly could: with a timeout for Crow. (He got a lot of those over the years, didn’t he?)

@optiMSTie A commonality I observed. Especially in Season 3. Enough so the practice of Servo filling dead air alone and seeming taken back by it are common. I counted at least 5 or 6 of these from this period. 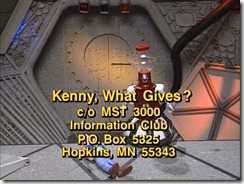 Oh, I love this episode. No, I haven’t done a comparative analysis of other movies “featuring” Gamera, but this one, everyone’s all-in. Perhaps even Sandy “ruined hotdog” Frank! And of course our impresarios and MCs on the SoL!

The Birds (1963), animals wreaking havoc pulls in the crowds

This is way off topic, and I know the author is divisive and certainly not for everybody’s tastes, but I just can’t help but plug Camille Paglia’s monograph on The Birds. An astonishing work of unparallaled fan-personing-ing and enthusiasm. A breathless tour-de-force.

No, I’m not touching Paglia’s politics with a ten foot pole, especially not here, but her monograph is tops among popular film criticism books intended for general audiences.

If you have the means, I highly recommended picking it up. It is so choice.