Dracula as a kaiju? Meet Gaos. Or it Gyaos? I lose track. Gyaos rests in a cave, feeds at night, and is lured by blood. Perfect for Seasme Street. Ask the kid. He’s front and center and explains everything. “The wolf will live with the lamb, the leopard will lie down with the goat, the calf and the lion and the yearling together, and a little child will lead them.” The Bible said nothing about big monsters. I’ll get back to you on that. Raspiness, Self Image Printers, Fax Tissue Dispenser, Make Your Own Gaos, The Gameradamerung, The Ed Sullivan Show, Better Ways To Off Gaos. “Oh no!!! DAIEI!!!”, “Gaos!!! Gaos!!! Daylight come and we wan’ go home”, “I love planning.” “There’s some ah fumes coming off your screenplay there Fumi” or “Hey well what does a director do if all the planning is done?” 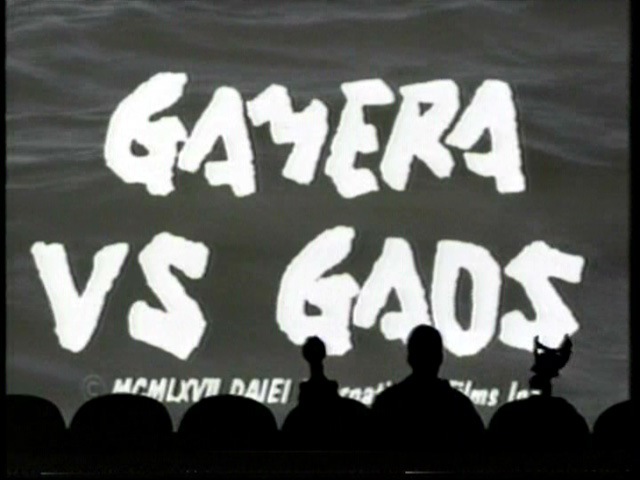 I still wonder if that moment where Gaos knocks the stalactite from the ceiling and it lands on his newly grown foot was in the original script or was a blooper that they decided to keep in (like a Japanese version of the “shoot the swordsman” scene from Raiders of the Lost Ark.

Also, it is interesting that Gaos/Gyaos is the most recurring Gamera monster given out of all of them, his abilities seem the most “normal” among other Kaiju. Barugon had the death rainbow, Guiron had the knife head and hidden shurikens, Jiger had the heat beam and parasite injections and while actual fighting skills were limited Zigra at least had the ability to speak.

Meanwhile, I wonder how lost to time Crow’s Ed Sullivan impression in the plate spinner segment will become.

Lastly…what’s your way to snuff Gaos since this was one of a few times they did a letter question segment and never came back to it?

@optiMSTie This is a Gamera I only now have seen. What is its reputation and place in the Gamera cannon? Thanks. 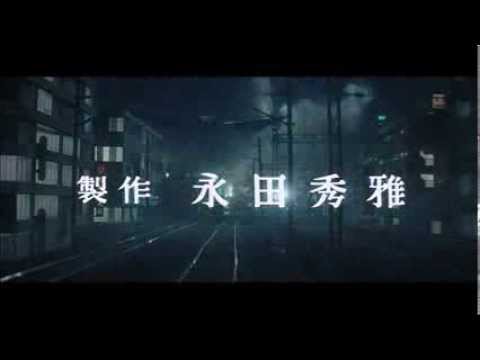 There’s an observation of sorts concerning how Japanese women often look like teenagers until some point in late middle age, when they morph into Yoda-like beings. This came to mind when I came to the realization that the woman I had presumed was Eiichi’s mom is actually his sister (the actress in question was 21 at the time).

And who is Eiichi? He’s the requisite bratty half-pint commonly included in the Showa era Gamera films. His physical resemblance to Kenny/Toshio from the first installment is so strong, I had to check at IMDB to be sure that it was a different kid. Speaking of IMDB, that’s where I obtained the spelling of his name. For you see, the pronunciation has the misfortune of being near identical to itchy (which is how several MST3K blogs and web sites spell it).

There’s also a subplot concerning a road construction crew at odds with some farmers unwilling to sell their land. But we the audience don’t particularly care (at least I don’t), as we came for the kaiju fights. While not as bad as the previous installment, there’s still too much focus on the bland human story and the heel kaiju rampage and not enough of the kaiju duking it out. The battles are considerably gorier than in previous installments, with oddly colored fluids squirting out whenever a wound is inflicted. Some might regard this as a bit much for a property aimed at kids. But consider Detective Conan, a long running series also aimed at children which regularly features gruesome murders. They just have some very different standards for what’s acceptable for the kiddies in Japan.

@optiMSTie This is a Gamera I only now have seen. What is its reputation and place in the Gamera cannon? Thanks.

This episode represents a significant step above its predecessor, Gamera Vs. Gaos, and the point where the film series on this show starts to get REALLY good.

One thing that definitely helps is that the humans are more likeable this time around (or are at least more tolerable this time) than the opal thieves from Barugon. You’ve got that goofy comedic duo emerging from the real estate development subplot, prompting Crow to menacingly intone that they’re “sending over a couple of blood donors” for the bloodthirsty Gaos.

Yeah, the kaiju certainly provoke some of the most inspired hilarity, but not all of it, as Joel proves in reaction to the farmland sounds of one particular scene: “Would someone please milk Grandpa, he’s in a lot of pain!”

We can’t forget about Itchy, the kid who forms a bond with Gamera, because they throw some great riffs in his direction. Among them:

Servo as Itchy: “I don’t know where my friend went, but there’s a pile of poop here with shoes in it!”

Joel: “I like how suddenly the kid’s in authority.”

Joel as Itchy: “Mom, if the UN calls, I’m playing with my slot cars.”

That, and West Side Story “Boy, boy, crazy boy!” riffs kill me every damn time.

What makes this episode cook is the movie ramping up the goofiness. Here, it’s all in the elaborate and bizarre plans to kill Gaos (which made enough of an impression on the writing room to inspire viewers to write in with ways to snuff Gaos).

I mean, trying entice Gaos with the blood fountain thing… what the hell?

Servo summarizes the strangeness of it all so flawlessly and humorously with: “This is so goofy. Operation Goofy in full effect!” And you have Crow chiming in with choice riffs like “Okay, let’s face it, he likes blood, but not the way YOU make it” and “nothing like Bloody Mary in the morning.” Joel lands decisive blows like “All right, it’s the last resort, send up the peel-and-eat humans!”

And I’m always a sucker for a “Do you want to go faster?” riff in response to the onscreen absurdity of trying to spin Gaos to his death.

Naturally, the headline fight has great hilarity to offer as well, such as Crow likening the clash to a hockey game: “Cross-check! He’ll be in the box for two!”

Gamera Vs. Zigra and ESPECIALLY Gamera Vs. Guiron would improve on what we see here (in terms of both the film and the episode), but this is a damn fine episode in its own right, and well worth repeat viewings.

Flying on over to the host segment side of things, that opening bit with the raspy celebrity voices? A TREASURE.

And I’ll love it forever for Magic Voice joining in the fun AND this screengrab from the very end of it: 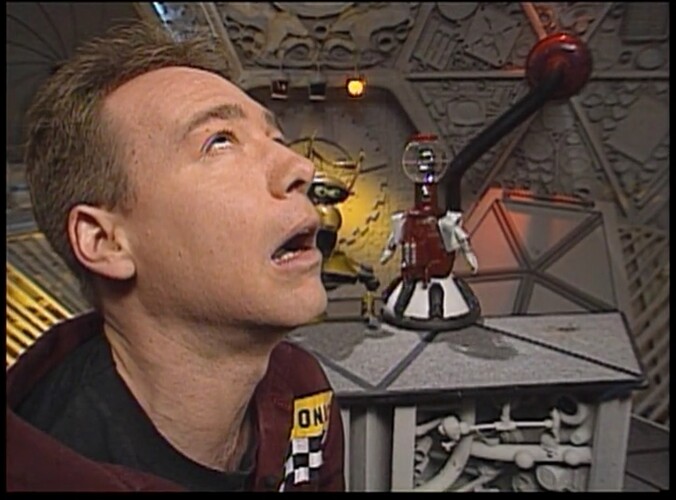 That had to have been a five-lozenge sketch… 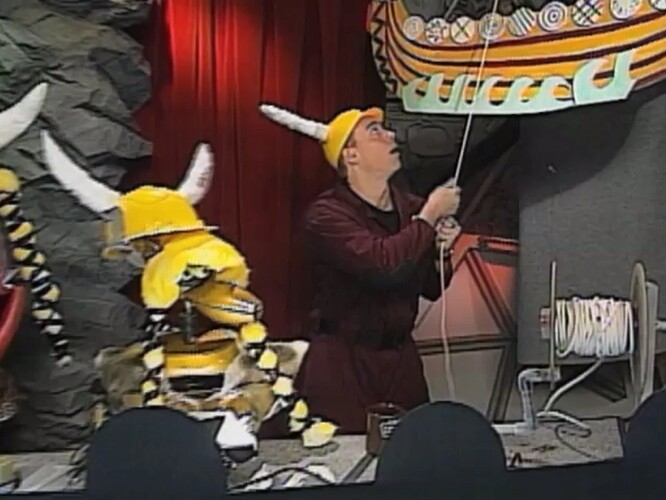 The Gameradammerung host segment is funny due to the whole idea of an elaborate-looking sketch that never gets off the ground when Movie Sign interrupts the proceedings, but what’s EVEN FUNNIER is the behind-the-scenes story of that sketch. Apparently, Team MST3K wanted to give toolmaster Jef Maynard an easier time of putting props together, so they decided to mastermind a sketch that never goes anywhere, only to inadvertently giving him EVEN MORE WORK than usual in the process.

For me, the highlight here is Crow doing his best Ed Sullivan as Joel tries his hardest to spin turtle shell plates (under the direction of an increasingly frustrated Servo) as Gaos the Great.

I never could figure out why this host segment was included on the Clowns in the Sky soundtrack album, but I loved its inclusion all the same.

A VERY close second? The 'Bots ruining Joel’s arts-and-crafts primer for the kids, and giving Tom Servo A VERY RARE TIMEOUT. It’s that hilarious return to the formula that is “the Bots interfere with Joel’s plans,” and the results speak for themselves.

Accordingly, I’m going to let Crow have the last word:

This one is pretty good (and extra appreciated after, if doing a Gamera run, the roughness of the previous chapter). The movie is noticeably more silly and always giving them something to latch on to.

Another winner in this iconic series of movies!

Word of the Day. 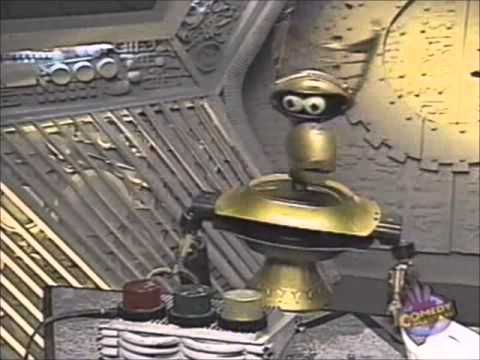 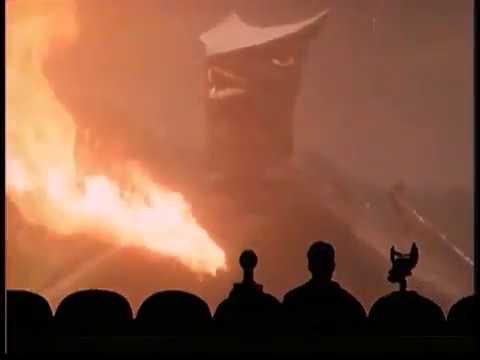 That, and West Side Story “Boy, boy, crazy boy!” riffs kill me every damn time.

This is my favorite of all the Gamera episodes! Inspired lunacy!

The Raspy Voiced Celebrity sketch is absolute GOLD. My favorite opener of the series!

The Raspy Voiced Celebrity sketch is absolute GOLD. My favorite opener of the series!!

They worked in a Harvey Fierstein nod, and we are forever in their debt for that.

The dubbing makes these episodes. Silliness just begging to be riffed. And then you have the Midwestern alien in Guiron and the Canadian hiker here in Gaos!

The dubbing makes these episodes. Silliness just begging to be riffed. And then you have the Midwestern alien in Guiron and the Canadian hiker here in Gaos!!

Mmhmm. The dubbing can add so much to the experience [gestures to Pod People].

All the silliness is already baked in with the kaiju chaos, but when you add that, it just becomes allllllllllllll the richer an entree.

Is Pod People dubbed? I’d completely forgotten that. Not sure I even noticed, given the rest of Pod People. A low budget teen horror alien slasher movie that got interrupted in the midst of production because ET had come out of nowhere and taken over pop culture and now the execs wanted a movie about a cute kid with a magical cute alien pal and so the script had to be rewriten on the fly, leaving the finished product a bewildering train wreck of two incompatible genres that fails at both, being too tame for a slasher film and also too tense for a cute kid magical adventure, and just cutting haphazardly between the two… Dubbing just doesn’t have much chance to stand out and be strange.

Whereas we have Gamera, which is… A magical child adventure about two giant monsters hacking each other to bloody pieces while the sexy alien ladies plot to eat the kids’ brains. But, you know, it’s Japanese. And was planned from the start to be a consistent whole. So when the aliens in the form of Japanese women are dubbed with the voice of a woman who apparently spent her childhood shuttling between Indianapolis and Atlanta, never quite got either accent right, and thought the way to make her voice acting more distinct was to pinch her nose closed while recording her lines… That becomes much more memorable.