I ordered this on VHS and I wasn’t disappointed. John Carradine and Tor Johnson? What a pair! “Hey your car is barking, better change your barkplugs!”, “What is this, Dog on a Hot Tin Roof?”, “Avon calling!” Dr. F’s Hard Pills To Swallow, a Life-Size Flintstone Vitamin, the Jackie Mason Jar, Posture Pals, “Time for go to bed.” A stinky black and white or “Music by the Edgar Allan Poe Marching Band”? 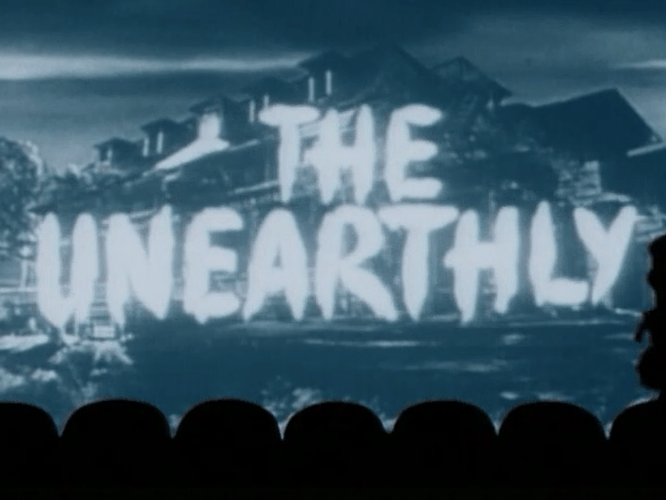 “Oh, it does my heart good to see Crow burned beyond all recognition” (! Wow, dark line from Trace!)

(Actually I forgot about this one…didn’t remember any of the host spots…soon to be fixed!)

Hard pills to swallow. Hysterical. Frank’s blubbering sobs, and the ludicrous pills. A++++!

The Rhino packaging on The Unearthly (1957). 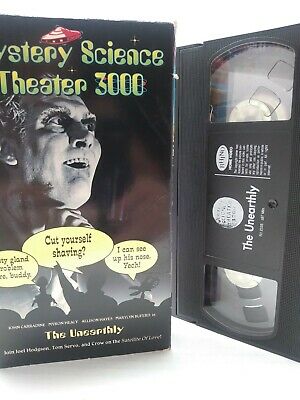 The slang sketch at the end is absolutely one of my favorites. “Dis movie gave me the jim jams somethin’ awful!”

A solid episode! John Carradine AND Allison Hayes! Not to mention Sally Todd and Tor Johnson! One of the best of season three.

I had no recollection of this episode before I saw it on VHS last year. It has become a favorite in that short time. I enjoy the two shorts, the “hard pill to swallow” is a classic, and the feature is an absolute hoot. I dug the episode so much that I bought a shirt for the latest live show in Charlotte with Lobo shouting “Time for go to bed!” Underated episode!

This episode is a lot of fun! Two excellent shorts and an easy target of a feature loaded with B-Movie Legends. The movie does get a bit slow and talky at times, but Joel and The Bots always find a way to liven it up. Great Host Segments too!

This is a real complete episode with a little bit of everything and is part of a great stretch of episodes to close out Season Three!

This movie has an impressive concentration of bad romances in it. Pious, incompetent Dr. Old Goat leers at every one of his female patients and strings along his vindictive and equally incompetent sidekick (who’s likewise young enough to be his daughter). Meanwhile the undercover cop is also an aggressive horndog who’s still coming on to the ingenue/main victim when the house is full of corpses at the movie’s close.

I’ve rarely felt worse for supporting characters in a bad movie than I do for Danny, the manipulated dope addict and Nathalie, who just wants to get well and enjoy her bad literature by the pool. Both of them are way more interesting than any of the leads and both are discarded without anyone really feeling sorry for them. Feh.

This film is the ripest of American cheese and the riffers appear to be having the time of their lives with it. It’s got those great shorts, the board game, not to mention the barrage of Fawlty Towers references. About the only thing it’s missing is a few Sylvester the Cat jokes as Carradine loudly sputters his way through all his hammy dialogue.

This episode is a lot of fun! Two excellent shorts and an easy target of a feature loaded with B-Movie Legends. The movie does get a bit slow and talky at times, but Joel and The Bots always find a way to liven it up. Great Host Segments too!

This is a real complete episode with a little bit of everything and is part of a great stretch of episodes to close out Season Three!

I won’t contest that and it rewards repeat viewings! 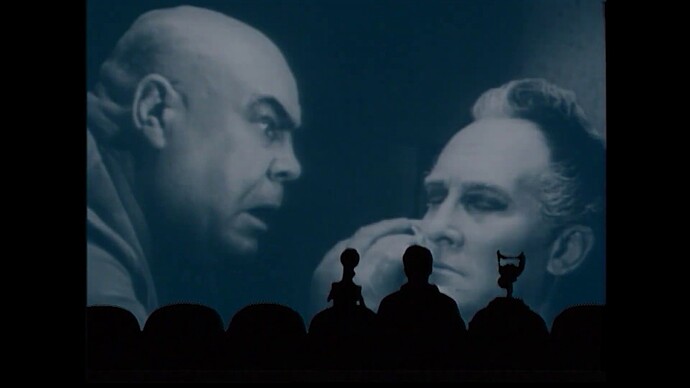 Another double dose of shorts, with both aimed at the elementary school set. Posture Pals involves a classroom competition on posture improvement and metaphors about trees and slumping clown dolls. Appreciating Our Parents concerns clueless little punk Tommy, who apparently believes that the household chores are done by brownies or something. Neither short particularly stands out on its own, though the latter one serves as the inspiration for what is the most gut-busting host segment of the episode.

The feature is set in a psychiatric rest home run by mad scientist Dr. Conway, who uses the patients as guinea pigs for his immortality experiments. An opportunity presents itself when the obligatory hulking assistant catches escaped death row convict Mark Houston skulking about the grounds. He would make an excellent test subject, since he wouldn’t be missed if things went wrong. Again.

One of the more curious aspects is how the characterization of the protagonist and antagonist skew from the usual template. The traditional mad scientist is a pariah dismissed by more conventional scientists for the outlandish theories he espouses. Conway keeps mum about his project and doesn’t intend to go public until he gets results, thus maintaining his professional credibility. In Mark’s case, he’s a rare instance of an MST3K protagonist who is competent. All too often the so-called heroes in these films are either ineffectual chumps who blunder their way through the narrative or hotheaded nitwits who charge into situations half-cocked. Mark actually thinks through his actions and doesn’t let his pride get in the way of calling in reinforcements when the situation warrants it. So it’s quite unfortunate that these characters are wasted on such a dull and plodding movie.

Come for the Carradine, stay for the Tor!

I am legit excited that The Unearthly is a Vault Pick for October. 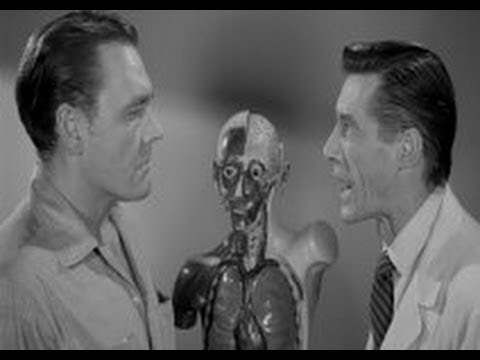