“Hey lady, where is this cafe?” “Fawrth Street!” “FAWRTH STREET!”

EVEN THE TECHNICAL PROBS ARE AMAZING RIFF INSPIRATION, as we get to the outside of the diner, and Mooney’s lines to Harry Bayliss are haphazardly edited so it sounds like it’s repeating/echoing, causing Joel to give off a panicked “I’M TRIPPING!”

This whole sequence is gold, even as the humor gets immature, like in this one moment:

This. Always. Freaking. Kills. Me.

(I wrote this up JUST AS @amass79 pointed that out. Great minds and all that.)

But then you have that impromptu musical sequence that follows, and I love it, even as the gang doesn’t make fun of how inexplicable the lyrics “Sideburns don’t need your sympathy” are. 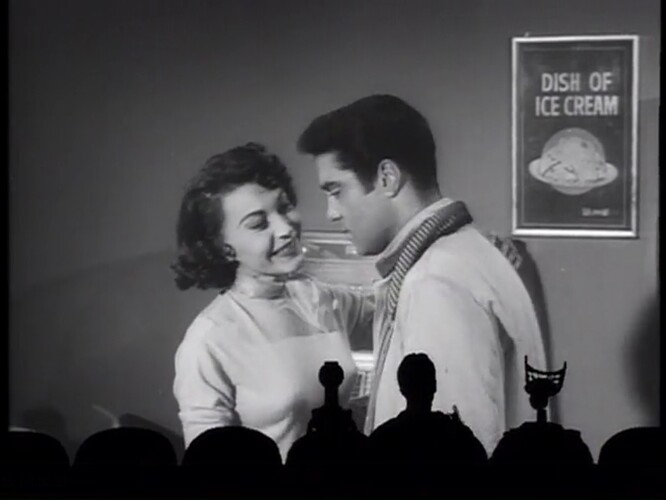 Perfect. Did I go on about how much I love this episode yet?

Beatniks is one of those MVP episodes that is always worth a watch. It is MST at its 90s zenith and never disappoints. It gets a well-deserved 8 out of 10 on my scale with the only drawbacks being the movie itself grinding in a few places. Top 10 of all time episode.

The whole rest of the episode follows suit, with a wonderfully dumb plot about how Eddie gets the standard Rich and Famous contract because of Bayliss overhearing him singing at the diner.

So much fun stuff follows, from the gang periodically saying “EWWW!” at ill-phrased things that Iris says, all the jokes about how bland the music is (love that joke about how it looks like Eddie’s singing into a refrigerator as he performs to a TV camera), and Eddie’s gang being terribly unhelpful over the whole course of things.

But the real star of this feature presentation? 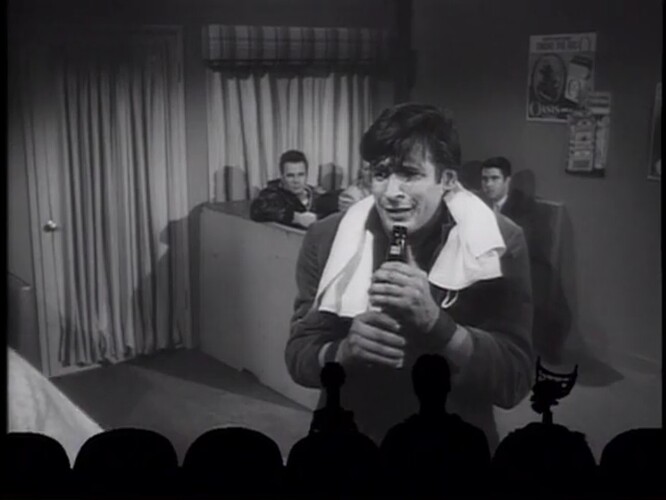 Plenty of people have underacted in the canon of MST3K’d movies. Burr DeBenning’s Doctor Ted Nelson in The Incredible Melting Man comes to mind, as do Lance Fuller’s “I don’t even really want to be here” alleged hero in The She Creature and Miss “Moon Rock Oh Wow” from Track of the Moon Beast.

Mooney? HOLY HELL. He goes in the complete opposite direction, chewing scenery to such an extent that some other movie a couple of blocks down was missing a number of walls. I don’t understand if this was a directorial decision or what all was happening, but I’m just glad that Breck was screeching, whining, and emoting like a complete and total madman, because it brought out the best in our riffers.

Mooney: [laughing hysterically at the diner after some bizarre incoherent self-aggrandizing babbling]
Crow: “I don’t get you. It must be some obscure conceptual thing.”

Mooney: “I’ll sing you a Moon tune. Pick up on this…”
Servo, almost inaudibly: “Uh-oh…”

Crow: “He’s an evil Gilligan!”
Joel: “He’s going out of his way to be loathsome!”

Servo after Breck screeches the line featured in this episode’s stinger: “He’s going through puberty all of a sudden!”
Crow: “Uh, this was the scene that got him the part in The Big Valley, right?”

Just… gah. Dude, it’s transcendent. This would be an amazing performance to watch and laugh your butt off at WITHOUT the MST3K guys busting on it, but you throw in that sensational riffing? The whole enterprise becomes MAGIC.

And that doesn’t get into, like, everything else. Not my favorite MST3K episode, but one of the most entertaining installments, for sure, because it’s just so jam-packed with ERRYTHING.

There’s one jaw-droppingly terrible moment near the end where Mooney beats the hell out of one of his buddies, prompting Iris to slap the hell out of Mooney, which causes Mooney to have some kind of episode.

As this sequence plays out, Servo asks: "Uh, technically, would this now be considered a killing spree?

THEN, Joel, riffing on a detective banging on their hotel door, yells “STOP THE OVERACTING.”

THEEEEEEEEEEEEN, as we see this totally unconvincing slapping and the subsequent physical reaction, Crow goes “TAKE THAT AND THIS AND THAT” and I lose my damn head every single time over this part. 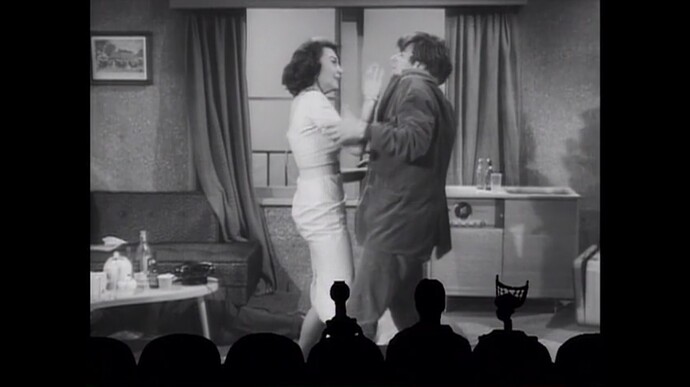 The only directing credit of voice actor Paul Frees, and written by him as well.

Paul Frees is the announcer in War of the Worlds, The Thing From Another World, The Manchurian Candidate…half the rides at the original Disneyland. He was truly the voice of a generation.

He co-wrote the songs with Eddie Brandt, whose memorabilia shop in North Hollywood was rather iconic once.

I mean, it’s really a “can’t miss” movie. As long as they don’t forget to look up “beatnik” in the dictionary. 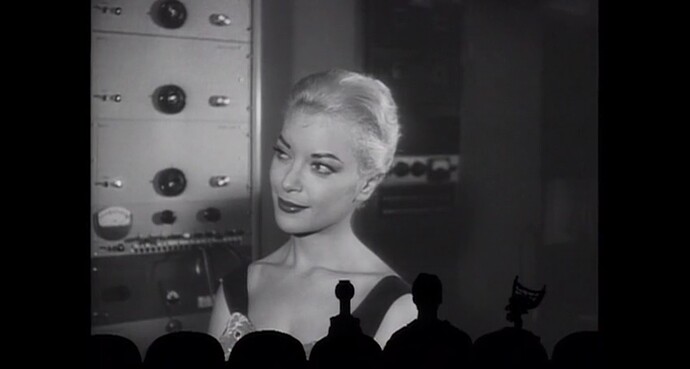 In the interests of being completely objective (I know, I know, this can’t always be a gushfest coming from me), I will say there was one thing that didn’t work for me in this episode, and that’s the gang going “AHHHH!” in reaction to closeups of Helen.

I love the “AHHHH!” recurring bit in MST3K more than almost any other recurring bit, but it didn’t work here. It just left me thinking, “Ahhh, y’all some savages for this.”

And if you ever feel like putting that to the test, it’s on the Internet Archive.

I was kind of wondering if I might be a Beatnik. Is there any guidance available as to whether or not I probably am a Beatnik?

The host segments are fun, with the gang taking exception to the movie’s concepts of beatniks, the sleepover fussing about Tony Travis, and Crow going into full-on Moon Mode, but the real gem here?"

The rise and fall of Tom Servo’s stardom. 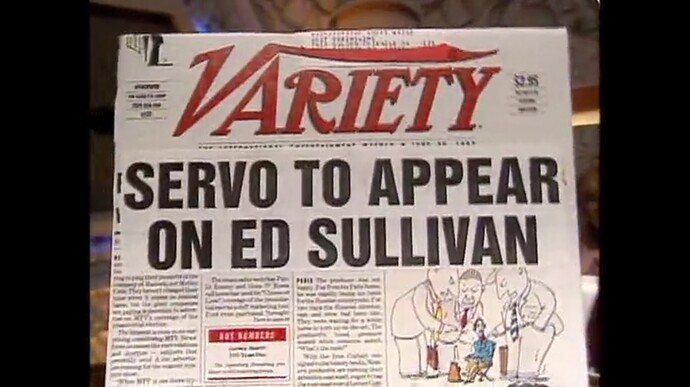 THEY DO THE SPINNING NEWSPAPER CLICHE 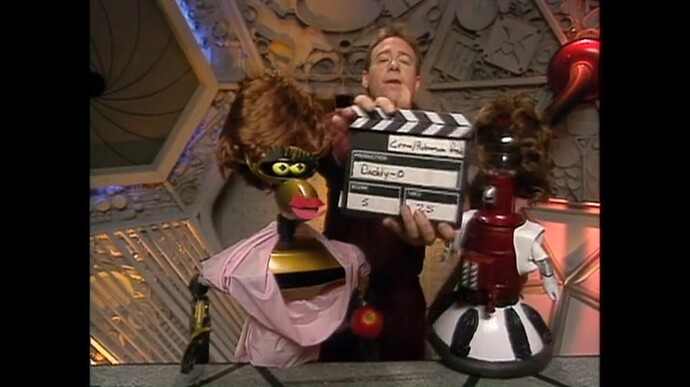 THEY ATTEMPT TO REENACT THE APPLE-SLAPPING SCENE FROM DADDY-O

And if you ever feel like putting that to the test, it’s on the Internet Archive.

Much obliged, brother, thank you very much!

“If these people are beatniks, then my mom’s a beatnik and… she’s… not.”

Joel’s delivery of that line is near perfect.

“If these people are beatniks, then my mom’s a beatnik and… she’s… not.”

Joel’s delivery of that line is near perfect

It is absolutely and quintessentially Joel-ian.

I was kind of wondering if I might be a Beatnik. Is there any guidance available as to whether or not I probably am a Beatnik?

… just out of curiosity, do you find yourself saying things like “Could you please pass the spring rolls?”

I love this episode, if only for the fact that Peter Breck is in it! I liked him in The Crawling Hand and he plays a completely off the wall character in this one! Talk about range! From a straight laced scientist to an off the wall musician! I can’t think of another actor that played such polar opposites in different Mst3K episodes.

Talk about range! From a straight laced scientist to an off the wall musician! I can’t think of another actor that played such polar opposites in different Mst3K episodes.

Like @moviegique mentioned, this is Paul Frees’ only directing credit. Could that have something to do with the spectacle we witness here?

I don’t know, but I would honestly understand if someone were to watch the two performances and refuse to believe that that was the same individual, because WHAT THE FLIP

Mr. Breck was also in Season 1’s The Crawling Hand. He doesn’t Rod Steiger-on-steroids crazy there like he does here, but he doesn’t exactly underplay the part either.

Mr. Breck was also in Season 1’s The Crawling Hand. He doesn’t Rod Steiger-on-steroids crazy there like he does here, but he doesn’t exactly underplay the part either

From what I understand, The Beatniks was a 1960 film while The Crawling Hand was a 1963 film.

That must have been a very interesting three-year interim, is what I’m saying.

MOONEY! Shut up, Iris. I killed that fat barkeep!

That says it all, really. Oh, everyone else already has.