A bleak crime drama laced with noir. An owner of a coffee house chooses three unsuccessful customers to perform a robbery during a layover on a train trip. Stealing from an armored car, the trio hop back on the train and the money tears them apart. Alive or dead, no one walks away unscathed. Scary Story, Quick Primp Kit, Paint By Number Mark Rothko, Johnny At The Fair, Scott Baio Acting Lessons, Chicago Stopover, Merritt Stone Method, Hercule Poirot. “Oh you know I got the nicest rebel set for my wedding. It’s so nice”, “Man, I wish I could afford a trap set man”, “Oh I never go down to The Village. They’re too nutty down there.” “That was close” or “Check that”? 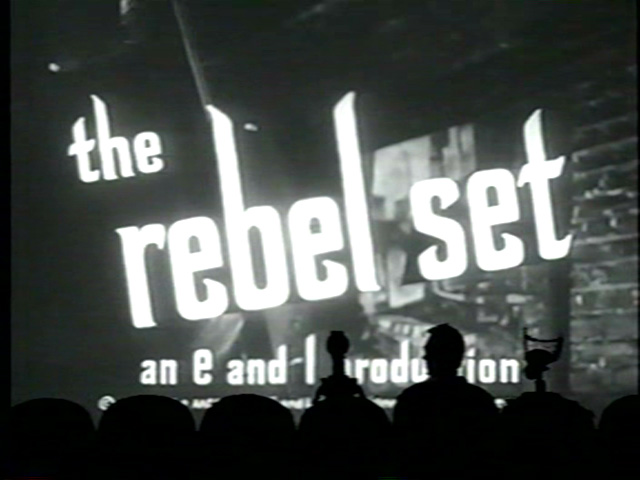 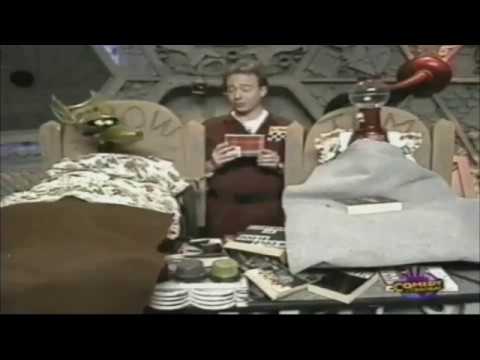 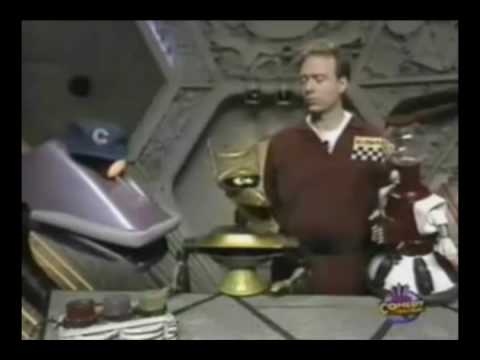 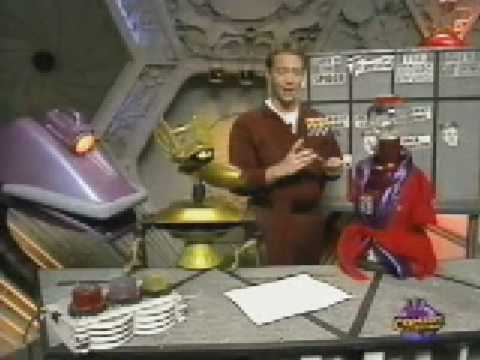 Then Get A Job and Scott Baio Acting Lessons. 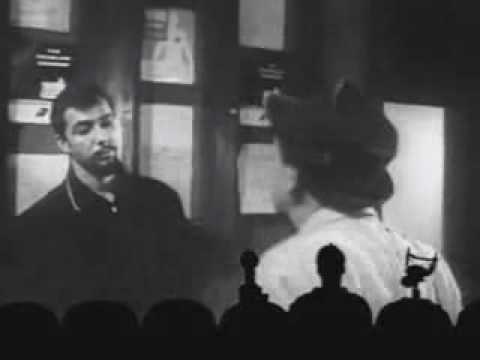 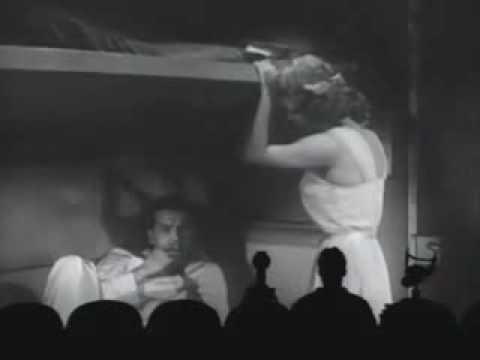 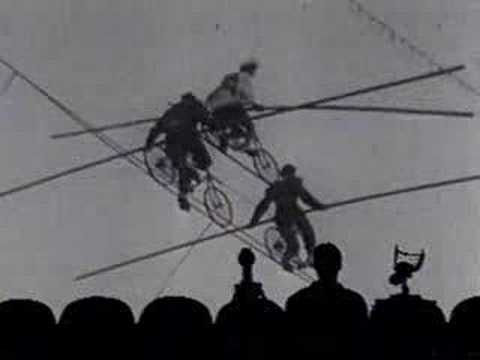 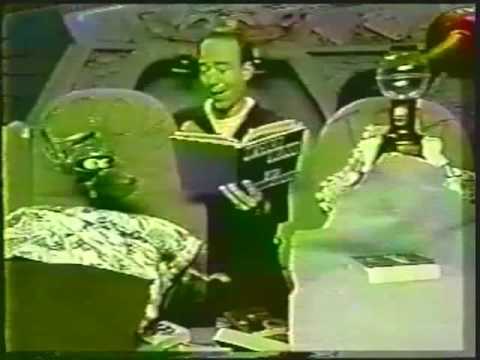 I said as much elsewhere, but I love the callback reference when the hero from The Giant Gila Monster enters the fray:

I like this episode well enough, but I find that the riffing is more uniformly strong in the short, "Johnny at the Fair.

The short is nowhere near grim territory, but the riffers go at it with SUCH DARK JOKES that it becomes irresistibly hilarious. Case in point, you have the moment where Johnny gets ready to take a plane ride, with Servo quipping: “Johnny thinks ‘Amelia Earhart’ sounds like a nice name.” Or the part where Johnny meets champion boxer Joe Louis, causing Crow to comment: “Joe hits Johnny up for 15 cents due to tax problems!” And then there’s Joel saying “Johnny’s parents decide to move on and start their lives anew.”

And there’s a whole short full of this! What do you expect when you have Johnny visiting an exhibit called the Chemical Wonderland?

The movie riffing is solid, but the short comes across as the star attraction by way of how it’s sliced and diced with expert precision.

I guess it had to come up in the rotation sooner or later.

This is the one with the fake Howard Hesseman. Dammit, I really dislike this episode/experiment. It is grim and dire! And all train compartments smell vaguely of this! 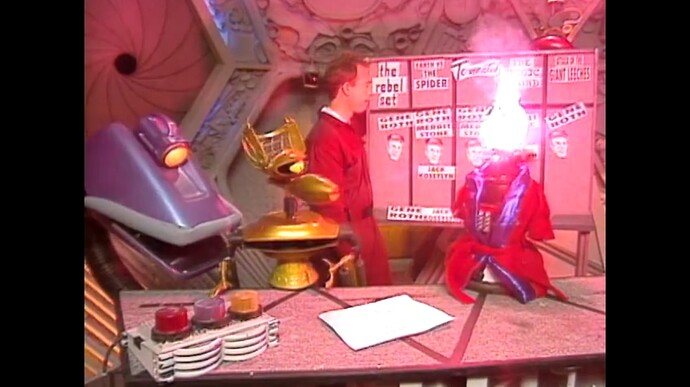 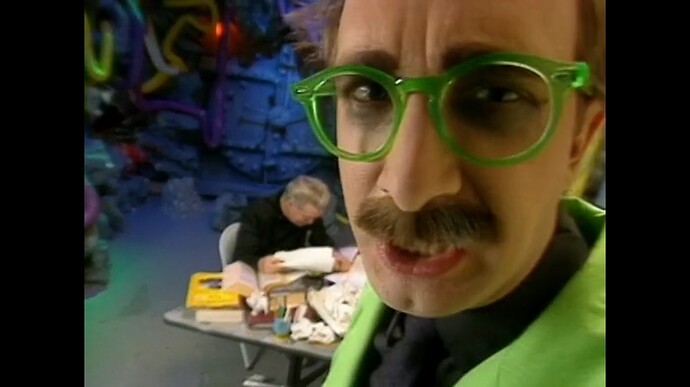 I will love this host segment forever for hilarious torment that the Merritt Stone Mystery™ inflicted upon Poirot Servo and TV’s Frank.

It also goes to show how the writing must have gone for Team MST3K in a time before internet research. (Perhaps that could have prevented any goofs on the “I thought you were Dale” front?)

This isn’t a bad movie. By MST episode standards it’s actually quite good. It’s well paced, generally lacking in bad plotting, has decent scripting, and follows a logical sequence with some legitimate interest in the main character and his wife with a compelling enough antagonist and secondary cast. It’s not necessarily a great movie, but it’s a lot better than most MST movies. The riffing is average and its an OK enough episode but not a standout. Desperately needed a “Mooney” character, or a Dr. Krasker, or some other character to lift it out of the doldrums.

Desperately needed a “Mooney” character, or a Dr. Krasker, or some other character to lift it out of the doldrums.

Yeah, our most colorful character here was the “I AM BUGGED!” beatnik from the stinger, and he doesn’t have very much screentime at all.

Edward Platt is plenty of fun to watch as the manipulative Mr. T (as the Amazing Colossal Episode guide says, not THAT Mr. T), but that fun comes out of watching him act/talk all sly-like rather than chew scenery or stand out as a bizarre individual.

This isn’t a bad movie. By MST episode standards it’s actually quite good. It’s well paced, generally lacking in bad plotting, has decent scripting, and follows a logical sequence with some legitimate interest in the main character and his wife with a compelling enough antagonist and secondary cast. It’s not necessarily a great movie, but it’s a lot better than most MST movies.

I’m a big fan of heist/caper movies, and yeah, this one has some genuine charm, intrigue, and watchability going for it.

A decent movie with a decent cast. I like this episode but it seems to me that Joel and the Bots kinda get caught up in this one. That’s not necessarily a bad thing, but it cools the riffing a bit. Great short here and I believe this episode as a whole is underrated.

Echoing what others have said: the movie is not actually bad. It has exploitation elements, since at heart it’s really just a heist movie, and the beatnik / social rebel stuff is tacked on awkwardly.

The riffing is decent throughout most of the movie, but when the main character has to chase Edward Platt in that ridiculous priest costume, the comedy kicks into high gear. What a great run of jokes.