Your comment reminded me of the Sinbad movie Dean Stockwell was in that was completely landlocked.

The movie where the titular character is not - in fact - the actual character of legend.

Which is the opposite of the Hercules films which were always titled “Maciste” even though Maciste is just a nickname for Hercules. There’s still people who think Maciste is some other guy when he really isn’t … it’s Hercules.

But its so BORING.

Yeah, I feel the same. It’s an interesting film visually and culturally, but it feels like a real chore to get through. All of the Russo-Finnish movies are like that for me for some reason. I want to like them, but I just can’t.

his name is not sinbad, it’s sinbad’s monster

I get the confusion, though. The Hercules films were very loose.

BUT HOLY HELL, I LOVE THIS ONE

I mean, you have to assume some level of bias on my part. I have The Sword and the Dragon slotted somewhere around the top 20/30 episodes, while I have the rest of the Russo-Finnish episodes in my top ten.

Hot damn, this gorgeousness of this film’s cinematography is only matched by IT’S GALL-TO-THE-WALL WEIRDNESS. One of the goofiest, zaniest movies they’ve ever done on the show (I believe it was Kevin Murphy who reflected in the episode guide that the movie could make you shoot whole popcorn kernels out your nose with laughter), and it’s a blast to watch. I’m not exactly sure why Dr. Forrester would think that it could be a movie to help him in his world-conquering mad science mission, but I’m glad that Best Brains chose this one, because YOWZA.

The movie never lets up, never slows down, never takes a breather, and this energy is met in kind by the MST3K riffers. Case in point, that raucous dance hall sequence as Crow freaks out that “Everybody’s gotta go, my parents are coming home any minute!” and Servo as Sinbad solemnly intones: “I’ve been around the world, and I’ve never seen anything as stupid as this!”

And then you have the drinking-based tests that Sinbad puts folks through to see if they can go on his voyage. I love Crow’s snide remark: “The Alcoholic Voyage of Sinbad will be right back after this!” As Sinbad gives a potential sailor a knockout punch as part of his screening process, an alarmed Servo wonders, “Couldn’t they just guess their weight or something?!” I especially love Crow’s “SATs were different back then!” and Joel’s “He’s drinking out of a Cap’n Crunch hat!”

EVERYTHING FOLLOWS SUIT. There’s so much going on, that it’s insane: Sinbad’s golden fishing, the magical woman of the lake (Morgiana to Sinbad: “And I shall be there, bringing you my golden fish!” Joel in response: “OH, WOW”), an all-out seaside battle (Crow: “He’s hitting him with his windbreaker!” Servo: “Ooh, that zipper hurts!”), that strange-as-hell chess scene (Joel: “Man, this is the most twisted version of battle chess I’ve ever seen!” Servo: “They just castled their brandy decanters.” Crow: "You boys put down Grandma’s knickknacks this instant!), the bluebird of happiness, THAT ENTIRE UNDERWATER SEQUENCE WITH THE DANCING FISH PUPPETS AND SINBAD RIDING AWAY ON A SEA HORSE AND WHAT ALL IS EVEN HAPPENING (Crow: "It’s Unforgiven underwater…) 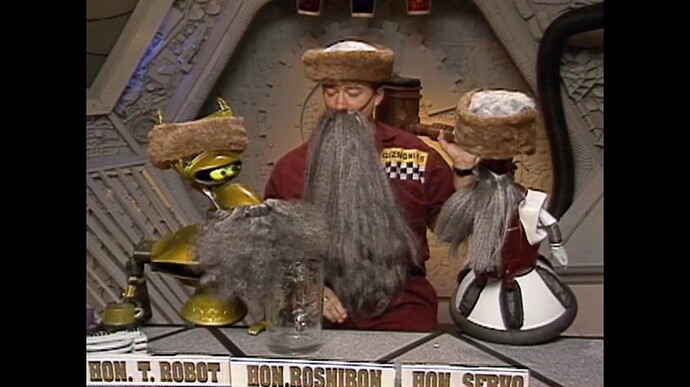 With this gang, I can’t ever be sure if they misspelled “ROBINSON” intentionally or if they screwed it up and just decided to move along with it.

Anywho, Eegah had two cerebral, more talkative sketches that I love, the Insidious Nature of Hell sketch and the 60s TV Family sketch. 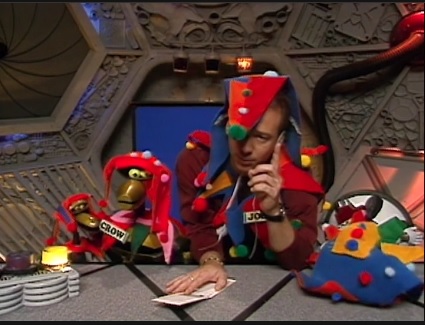 This episode features two sketches that are more/less on the opposite side of the spectrum, but no less entertaining: the Junior Jester Club sketch and the town council sketch. They’re goofy as hell and full of silliness from top to bottom, and I adore them to no foreseeable end.

Everything else is great, like Crow’s magic voyage and Joel’s whimsical catfish puppet and all, but these are the centerpieces of a screamingly and hilariously insane episode.

I always enjoy reading your opinions on these, optiMSTie, especially when it’s one I’m not so keen on. You always make me want to give things another try.

I always enjoy reading your opinions on these, optiMSTie, especially when it’s one I’m not so keen on. You always make me want to give things another try

Thank you very much for the kind words!

The same goes to you and the other folks here when I see an outpouring of love for an episode I’m not overly keen on, myself.

Sometimes, it’s an experiential thing. Outside circumstances or the course of the day could have an influence on how you see an episode. If someone’s having a crummy go of it, it’s entirely possible that even the best episode may have a difficult time getting the jokes to land. But this series can surprise you with how good some episodes are* if you didn’t particularly/initially care for them. I remember liking elements of The Touch of Satan, for example, a lot better when I went back to rewatch that, even though it’s definitely not an episode I would personally champion.

Which is to say, sincerely and genuinely, thank y’all for putting your voices out there on these episodes.

As was said in The Hellcats :

*except for The Castle of Fu Manchu, because you will not put that evil on me

How Sinbad got such a cheesy name according to Joel during the 2014 Turkey Day Marathon:

“You’ll notice in the original Russian version, the title character was originally called Sadko. However, US producers decided to change his name to Sinbad, because Sadko made the title character sound like he was some sort of… seafaring sad clown.”

“WE HAVE A WINNER. HOLD YOUR CARDS.”

“Man, I never knew Arabia was so Russian.”

Compilation or Trailer of Sadko (1953). I can’t say for sure which. 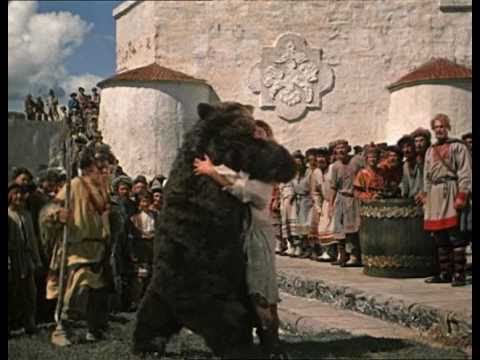 As was said in The Hellcats :

*except for The Castle of Fu Manchu, because you will not put that evil on me

As a Manos man who cut his teeth on the “SANDSTORM!!!” of DEEP HURTING!!!, pain in a MST feature comes as second nature to me and even par for the course ever so often. You can’t watch Mystery Science minus cringing and agony ever so often. If the writers had to suffer through it than so must I. The Castle of Fu Manchu (1969) is potentially the hardest experiment to sit through and the allure to me is that it’s so bad it breaks them down. Every other episode they bounce back but not this one. And I like that.

Not unlike the tweaks found in Season 13, 323 flirts with Forrester actually winning one and taps that to the max. The riffs I enjoy and the tears and sadness interlaced into the commentary take it to another place. It enhances Joel and the Bots in those moments where they carry on but might not be up for the task. Fu Manchu and Manos are the downside of their predicament while The Day The Earth Froze and The Magic Voyage of Sinbad are the good times. And in life, you can’t enjoy one without appreciating the other.

505 like 301 or 303 is the zenith of the format working as entertainment while the Deeper Hurting is for the heartiest among us who savor the heat amidst the suffering. One’s preference depends and I can’t say 323 is one I’ll get back to like Sinbad while it lays bare the limits of what is possible as 505 alludes anything is. This mixed signal signifies any day or any episode is a story to itself much like life. 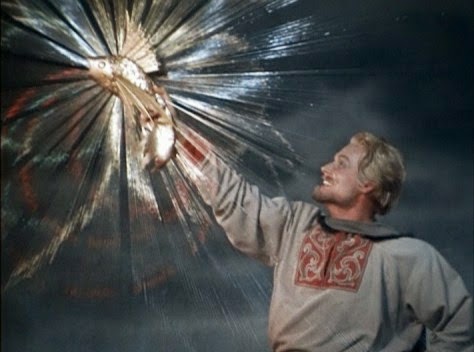 I just want to say, I love this entire post.

This is a really nifty meditation on the whole concept of a “hills and valleys” perspective on the show, that you can’t appreciate the heights of the lighter films without the depths of the harder films (or vice versa, depending how you wanna look at MST3K’s big picture). That’s something I hadn’t considered, but there’s wisdom in that. I dig that.

I love the idea of The Castle of Fu Manchu being damn hard to get through/revisit, but necessary in defining the limits and possibilities of the whole enterprise, just as it is with Manos.

One of the best of season 5! Host segments are among the best! Riffing of the movie? Above average! Joel would leave us after 512, but he left us one terrific episode 505! Not quite as good as 506 but still excellent!

I am convinced that whoever did the English dub used a recording of Brian Blessed calling “Get him out!” in there even though he didn’t get into films until the 1960s.