515. The Wild Wild World of Batwoman

What gets me is that she has a house with a known address. Rat Fink (in his civilian identity) goes there and sits right next to her during the cringy racist seance. The patent guys call up and get the address and are let right in. The Bat Girls come over on a regular basis and wear no masks, costumes, or other disguises. But she has a mask and is treated like she has a secret identity and the girls are treated as secret undercover agents. 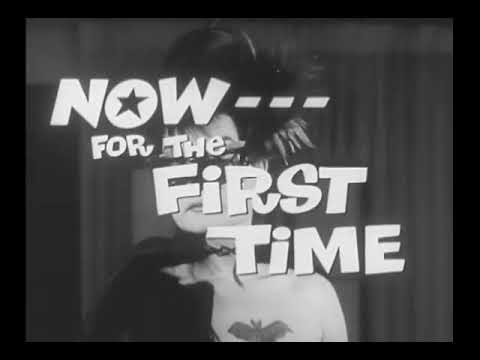 From the trailer alone clearly trying to confuse audiences into thinking this was Batman-related… the chutzpah on this movie.

And all that craziness, including a self-duplicating machine, over a hearing aid.

At least our more recent Batwoman had to deal with a fish man.

At least our more recent Batwoman had to deal with a fish man.

And she looks really good in her costume.

But they bring up that the drink isn’t blood, it was a smoothie. They were just playing Vampires for the initiation.

They missed their big chance to serve blood orange smoothies and have it both ways!

Dang it, this thread has me thinking about Tiger’s hips again!

But they say they are vampires. They just don’t drink blood anymore.

“Drink this.”
“Do I have to?”
“It’s part of the ritual.”
“… Hey, it’s good!”
“Now that you’re one of us, I can tell. We’re vampires, all right, but only in a synthetic sense. giggle Drinking the real stuff went out with Count Dracula. giggle”

They are not vampires. They never drank blood. They go out in daylight and have no powers. They’re ordinary humans.

This is just the swearing in ritual for a new Bat Girl. They’re having a bit of bat-themed sorority fun, while testing the allegiance and resolve of the new pledge. It’s made very clear by their excessive laughter that the vampire comment is not serious.

I think you’re putting more thought into this than the filmmakers did. Remember, it was also released as “She Was a Hippy Vampire.”

Yes. I’m the one who mentioned that.

“She Was A Hippie Vampire” was the title of the film’s second release.

As I and others mentioned, it’s likely they included the vampire aspects (the ritual, the fake blood, Batwoman playing organ music while making her guest wait, etc.) to try to fend off the expected lawsuit by distancing themselves from Batman’s mythology while still clinging to the “bat-themed crime fighter” angle. Likewise, even though it’s a campy bat-movie rushed into production to take advantage of the surprise success of the Adam West show, they modeled the whole thing after the 1940s serials. Again, so they could make it a little harder for DC to pursue a copyright claim.

Which actually worked. Warren won the lawsuit. (I remembered that part wrong.) The film completed its theater run, and then a year or two later, Warren re-released it under a new title for a second run.

“We’re vampires” is a joke. A throwaway line. As you said yourself, it doesn’t fit with literally anything else they show us about the Bat Girls. It was never intended to be taken seriously.

What I’ll remember most about this one, is a person I was dating at the time was offended by this film.

I had been showing her a number of MST films, and had forgotten about the bad “Asian gibberish” bit.

She was Chinese, and as soon as she heard it, she demanded I shut the film off.

This movie is one WEIRD mama jama. Definitely the worst of Season 5. And poor Steve Brodie… At least Giant Spider Invasion was entertainingly bad. This is just plain BAD. I’m sure he would’ve been happy that his “work” in WWWoBW was never mentioned during the riffing of GSI…

The only reason I watch this, is because of the Cheating short, and the segments tying into it.

My first MST3K and it was a banger. “Cheating” is probably one of my favorite shorts of all time, and this movie is an aggravating and endlessly entertaining mess that attempts little and succeeds at even less.

“When I get back to earth, the first thing I’m gonna do–”