Mr. Pitch disturbs my daughter so much. It’s the sound he makes when he appears and disappears. She finds it really creepy. She couldn’t sit through the whole episode because Pitch creeped her out so much.

She had trouble with Coily too.

So I take it you dress up as Pitch every night and dance around outside her window?

You know what, guys? This movie’s kinda weird. But it’s enjoyably weird and makes for a good bit of holiday viewing.

Producing another Christmas episode might seem pointless. After all, how could anyone top the likes of Santa Claus Conquers the Martians? The answer comes from this piece of South of the Border insanity brought to us by our old pal K. Gordon Murray. It takes quite a few liberties with the classic Santa Claus mythos. For instance, he now lives in an orbital castle instead of at the North Pole. Also, his helpers are a collection of child national stereotypes rather than elves. His spying apparati for determining who is being naughty or nice are quite unsettling, featuring actual eyes and ears. A bit surprising is how the movie goes about acknowledging the religious aspects of the holiday, as most Santa Claus films are aggressively secular in tone.

The bulk of the action involves a devil named Pitch who goes about interfering with Santa’s Christmas Eve duties and encouraging children to be bad. A particular target for the latter is the poor yet obnoxiously adorable Lupita, who only wants a doll.

Out of all the movies screened on the show, I would argue that this one has the most scenes worthy of being used as the stinger. Certainly, the mechanical reindeer with its unsettling laugh is an excellent choice, but there are others which offer a strong case. For instance, there’s the hideous animatronic department store Santa Claus that rivals the one from the Are You Being Served? Christmas episode. Or the scene where Santa out of the blue gets hit with a rock. And you can’t discount any of the slapstick indignities Pitch suffers through.

This episode is my favorite of the Christmas entries. The clash between the nightmarish imagery and the twee narration in the dub makes for some prime riffing material.

While the new songs aren’t as good as Patrick Swayze, I did find the skits to be delightful. Especially the decision to give the SOL crew a magical Christmas snowfall.

Too many great riffs to narrow down, but I do always crack up at the unexpectedly risqué Servo quip as the camera pans slowly up St. Nick when the rich kid awakens: 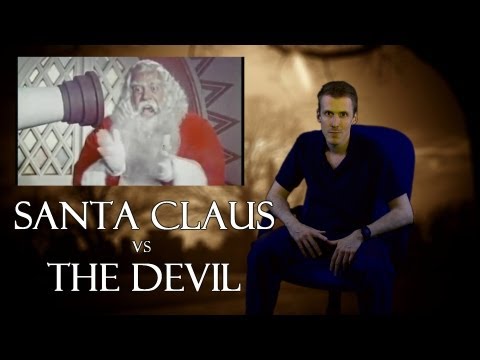 @optiMSTie Next to Santa Claus Conquers the Martians (1964) and The Christmas That Almost Wasn’t (1966), where is Santa Claus (1959) in the world of MST3K? Adored staple, runner-up to Martian, or “The Other White Meat”? 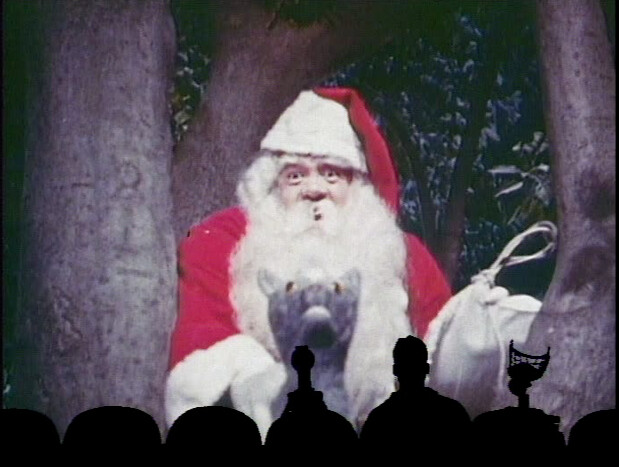 Kind of a yawner episode. Not bad. Not great.

Note: Also referred to as Santa vs. the Devil, Santa Claus (1959) is directed by Rene Cardona who navigated Santo in the Treasure of Dracula (1969) and The Batwoman (1968). As Jonah blared, “Rene, my man, give me cinco!” 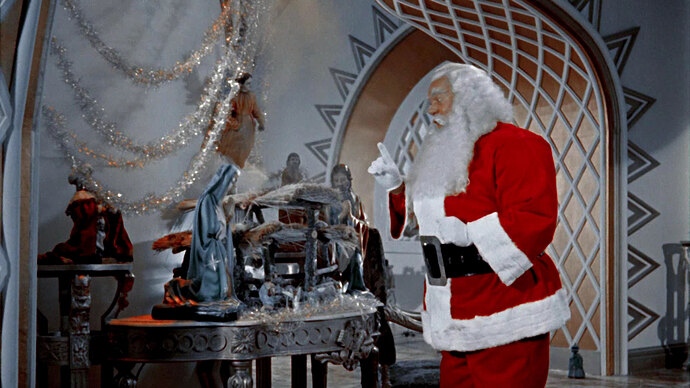 This one’s a particular favorite for me. It has Santa fighting a demon, which isn’t nearly as cool as it sounds on paper, but it is great riff-fodder. And Christmas episodes always get an extra point on my 1-10 scale just because I’m that sentimental for the Yuletide season.

@optiMSTie Next to Santa Claus Conquers the Martians (1964) and The Christmas That Almost Wasn’t (1966), where is Santa Claus (1959) in the world of MST3K? Adored staple, runner-up to Martian, or “The Other White Meat”?

They’re all terrific in my book.

But for me, the champion has been Santa Claus Conquers the Martians. It narrowly misses my top ten, and I’ve always been down for that one. Part of it is admittedly out of a sense of nostalgia. It’s one of the first MST3K episodes I discovered by way of the Mystery Science Theater Hour, and I played the hell out of it during my junior high years. The other part of it is because it’s written so dang well and really stands out as a truly special installment.

Santa Claus, though? That’d slip slightly out of my top 20, I would think. If it’s a runner-up to Martians, it’s by a minuscule gap.

If this episode has an all-timer sequence, it’s the one at the beginning where Santa checks in on helper children from all over the world, with the riffers chiming in with ABSOLUTELY SAVAGE JOKES along a number of different wavelengths. There’s a lot of great complete-the-sentence riffs in this vein, such as:

Narrator: “The countries of Central America—”
Mike: “— are a threat to Santa’s vital security interests.”

And after a series of insensitive jokes about other countries, the focus turns to the US, prompting this quiplash:

Narrator: “The children of the U.S.A.—”
Crow: “— are too spoiled and lazy to help Santa! Haha! There, that makes it better.”

This whole opening sequence operates like an MST3K short, and the results are fantastic.

“Can we move on to a country with some rhythm?”

BUT THE EPISODE DOESN’T STOP AT THAT OPENING SEQUENCE. OH NO.

Weirdness abounds throughout this movie, especially in the form of Santa’s foil, the devil Pitch. He’s another one of MST3K’s classic characters, with his sense of showmanship prompting the gang to ventriloquize calling himself “positively EVIL!” This guy is riffed to perfection. Servo’s excited riff of “JAMIE FARR!” makes me laugh like hell each and every time.

Santa has a hard enough time delivering toys, but in this movie, he has that conflict with Pitch, who’s trying to take Santa’s international goodwill effort down. It’s this Spy Vs. Spy battle between the two that lends itself to excellent joke material and observations. One golden moment has the narrator gleefully declaring that Santa will take the chance to retaliate against Pitch, prompting Servo to wonder: “Now, isn’t this bringing Santa down to Satan’s level?”

That, and you have several subplots being juggled at once, all adding up to inspired hilarity, whether it’s the boy whose parents leave him to go out on Christmas night (Mike as the dad leaves his child: “Our love’s implied. Goodbye. Maybe we can do this again sometime? You seem like a nice kid”), a trio of kids who are corrupted by Pitch into carrying out his bidding (Crow: “Isn’t kidnapping Santa a federal offense?”), and poor little Lupita, who only wants a dolly for Christmas (Lupita’s initial intentions of taking a dolly are met by Crow’s “SOCIETY OWES ME” and Servo’s “RUN, LUPITA, RUN!”).

We’re not even getting into all the weird mythology at work here involving Merlin and the mechanical reindeer and Santa’s sleeping dust and the time constraints that compel Santa to return before sunrise brings terrible consequences with it.

Point is: even with the familial drama and the devil’s meddling and all, this movie is a very light confection that goes down easy and makes for a perfect vehicle for the SOL gang’s jokes. Even though it’s pointed out that Santa’s got “three houses down, 650 billion to go,” this episode doesn’t fail to deliver.

“HEY, CHILDREN ON THE VERGE OF A NERVOUS BREAKDOWN.”

My favorite musical moment of the episode?

There’s this goofy-ass organ that plays a tune as Santa loads his sleigh, leading Servo to channel Blood, Sweat & Tears: “I’m not scared of dyin’, and I… don’t really care…”

I never remember that joke on replays, and it always leaves me laughing very, very hard.

My favorite musical moment of the episode?

There’s this goofy-ass organ music that plays a tune as Santa loads his sleigh, leading Servo to channel Blood, Sweat & Tears: “I’m not scared of dyin’, and I… don’t really care…”

I never remember that joke on replays, and it always leaves me laughing very, very hard.

The Santa in orbit material seemingly is the funniest. Is that because this is where the film is at its strangest? The reindeer, the kiddie equipment, the artificiality of it? 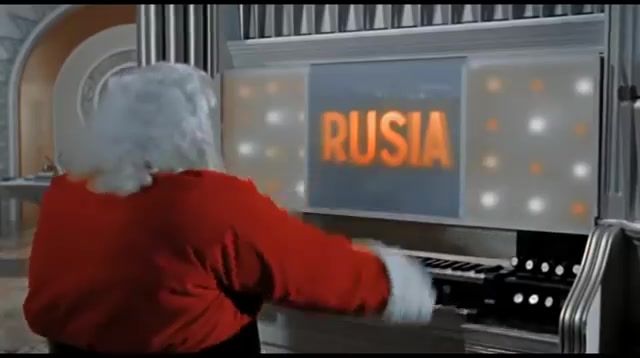