I love this one! I first saw it after I purchased the Rhino disk set. A watchable movie featuring Robert Reed and June Kenney. Great short, better movie! Season 6 is chock full of good episodes and this one is one of the best! Definitely a lull in the middle of this but the finish is excellent!

The fiddler for this square dance is a young woman by the name of Maria Bamford.

Especially if someone breaks the no Oddjob rule!

This is another “oh yeah, I remember that one” episode for me. Perfectly watchable, with a decent short, but not one I ever find myself saying “yeah, I’ll put that on.”

Especially if someone breaks the no Oddjob rule!

This is another “oh yeah, I remember that one” episode for me. Perfectly watchable, with a decent short, but not one I ever find myself saying “yeah, I’ll put that on.”

Funnily enough. In my group of friends, I always played him. Not knowing there was an advantage. I loved the character and it’s who I choose. Following months of me dominating, we decided to ban his use and then I was Jaws after that. 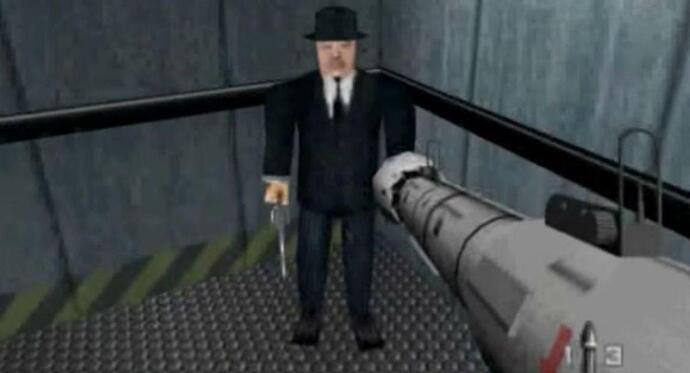 I always forget about the Murder Mystery Dinner Party when people talk about their favorite host segments. It’s such a simple, quick-hit joke, but it works fantastically.

Bloodlust is not a great MST episode … but it’s a GOOD one. IMO it is somewhat underrated as a whole by the community. Admittedly it lacks the memorability of the classic episodes, but it also manages to avoid anything that would made it a bad episode either (aside just from the sheer dullness of the movie itself). It’s average … and that’s totally OK. I don’t go out of my way to watch it when it rotates on, but I’ll leave it running every time it shows up. It hits a lukewarm, easygoing middle ground like a plate of mashed potatoes or a cafeteria hamburger.

What the movie does have going for it is a decent cast. Bellows is a decent, hammy antagonist with an oily arrogance and dumb “plan” that relies on his victims not bum-rushing him and beating the crap out of him by sheer numbers. His crew of sailor-suited minions is goofy enough to stick in your mind. The victims run a gamut of over the top to milquetoast but each one has their place.

The riffs? Meh - they do good work with what they have but why this episode gets overlooked (IMO) is mostly due to the fact that there really don’t seem to be any standout riffs to latch onto. They’re fine. They’re just not particularly great either. So it’s easy to file Bloodlust away and ignore it, even if its a solid 5-yard advance down the field ever time.

I think the short overshadows the movie and most of the sketches. The dinner theater sketch is the best. Short, snappy… says all that’s needed and moves on.

Every time I see this movie, I’m struck at how overcrowded it is. There’s enough cast and plot (or subplot) for a TV miniseries. Too much for just one movie. You’ve got the quasi-teen quartet, the drunk captain, the henchmen, St. John The Screamer, the adulterers, and of course the Bad Guy. (Am I leaving anyone out? Maybe the stuffed bear counts as a supporting character?) At least that kind of keeps things from standing still. As with The Atomic Brain, though, it’s hard not to notice at least one scene where the teens could’ve easily overpowered the effete old clown but didn’t even try.

The acting’s fine for what it is.

Time moves weirdly in this film. I assume that the editing needed for the show makes it seem like Bad Guy caught and taxidermied the cheating couple in about half an hour. Overall, it’s better not to think too hard about how seldom the plot and logic manage to be together in the same room.

Good riffs overall. Hats off to Mike for his Andy Williams reference. A really deep cut there.

Between the leeches, the acid baths, and the crucifixion, I wonder if this movie was considered a gorefest for its time.

Oh, and I know I’m in the minority once again, but Pearl and her gonzo hair are a hoot.

It might have indeed been considered a gore-fest. According to IMDB, it was shot in the late 50’s but wasn’t released until the early 60’s. The same thing happened with The Brain That Wouldn’t Die.

hmm. This was a really fun riff. But I think it might be either me getting cranky in my old age or just a spill-over from my film critic days. But this story frustrates me.

You got another “Most Dangerous Game” ripoff. But this time he spends the bulk of the film talking about how he’s going to hunt people down rather than hunting people down. But what get’s me, is that our teenagers spend the whole movie in easily escapable situations or easy drops on the threats. At one point, after they had seen the boiled bodies and the lair, he sits at a table and calmly explains how he is going to hunt everybody down. All while the teens stand RIGHT BEHIND HIM. Seriously. A bonk to the head and this is all over.

I get that these guys are all really ineffectual. Especially nerdy guy who just whines the whole time. But I swear the bag guy’s plan only works because everybody reacts to nothing except what he wants then too.

Of course, that’s why it is so funny. And, after all, it is a bad movie. I think The Bubble has limited my tolerance for protagonists who don’t act like normal humans in these situations. These folks have the self-defence instinct of mealworms.

We could have used some Brady jokes in there as well.

At one point, after they had seen the boiled bodies and the lair, he sits at a table and calmly explains how he is going to hunt everybody down. All while the teens stand RIGHT BEHIND HIM. Seriously. A bonk to the head and this is all over.

Pretty much this. I counted no less than seven different occasions where a simple bum rush would have easily overpowered Bellows and ended the movie flat out. At least three of those occasions were ones where it could have been done with almost zero risk to the people attacking him (I.E. your example where they are crowded around him, he’s sitting at a desk, and there are four young, strong adults all less than a foot from the guy’s turned back).

Bellows … like Prince of Space his power lies in choosing incompetent enemies.

No kidding. And it reminds me of another vault pick, Village of the Giants. What exactly was preventing the 2 girls from just casually walking out of the theatre when the one giant was a guard? Hmmmm?

“So long, you corn shucking suckers!” has proven to be one of the most useful phrases I’ve learned from MST3K.

I think it was “Corn-shucking crackers”.

Fear of getting stepped on?