Pure Roger Corman quality. Screenplay done in six weeks, $68,000 budget, recycled monster from Teenage Caveman (1958). Gene Corman, AIP, a week of shooting, and this is your outcome.
Space Flight, Alien Embryos, The Thing From Another World (1951). Were Ridley Scott and John Carpenter fans? Blood pooling, microscope, threat from outer space, no phoning home on this trip. Personal Security, Trombone Recital, Once Upon A Honeymoon, Decorating With Phones, Dr. F Apology, Crow’s Pregnant, Pearl. “Hey, Ed Nelson of Ed Nelson Plumbing and Heating”, “From a sentence by Gene Corman”, “Help! The conductor is having a seizure!” “This band stinks” or “This has been thoroughly Corman-ized”? 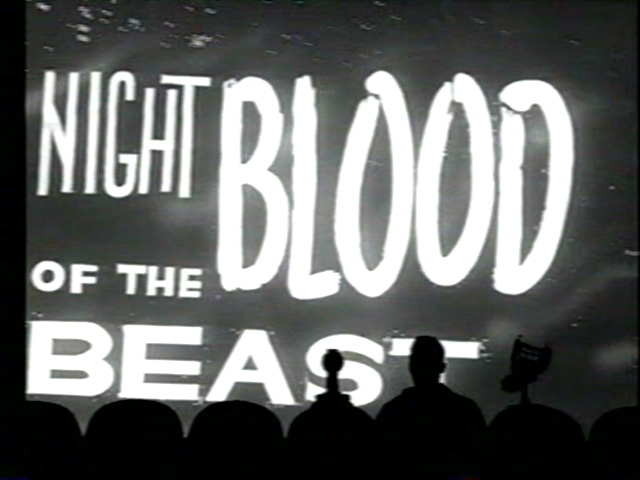 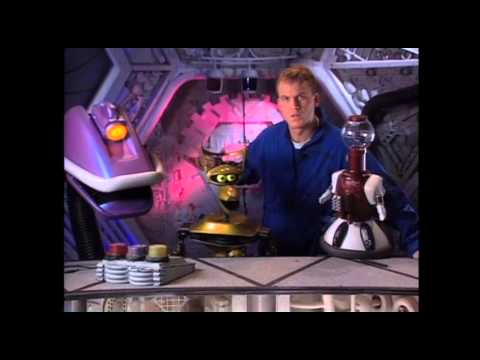 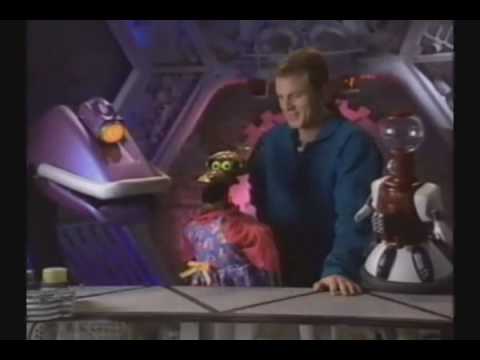 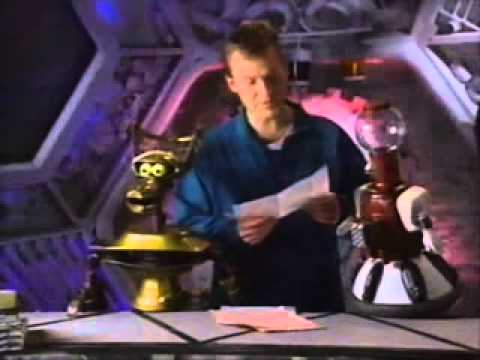 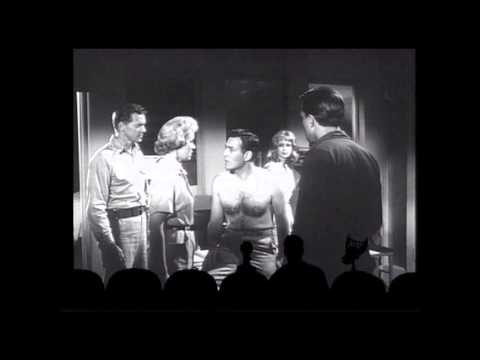 Sun And Fun Capitol Of The World. 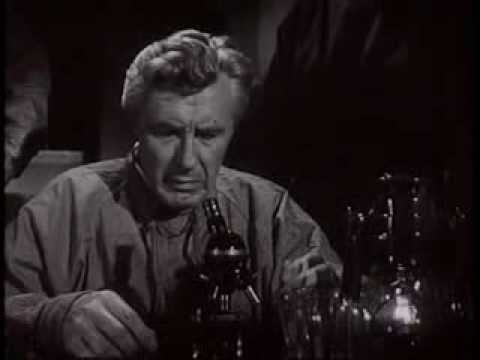 Really like this one! First, you got this straight-up WEIRD short that’s way too into the story as opposed to the advertising (honestly took me many re-watches until I figured out its true purpose). It’s so exceptionally riffed!

The main feature is good, reliable Corman stuff. The “Steve” angle is such a fun running gag!

Both sets of Host Segments are good. I personally thought it was funny and bold that they tried a “role reversal” with the new Dr. Forrester and Pearl dynamic.

Also (to me): Everyone involved seem noticeably more enthusiastic than usual since they were done with the grind (and outside frustration) that was the MST Movie.

Season Seven is a short-but-excellent cluster of episodes and this was a great kick-off experiment!

No Disco and Dr. F Apology. 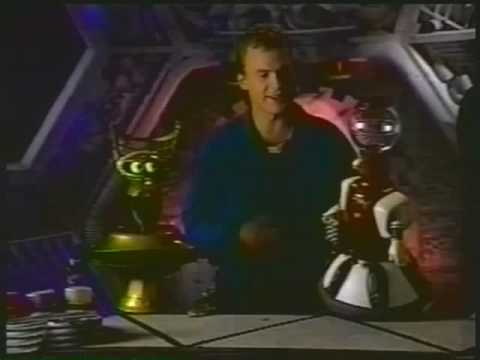 Alexander Lazlo’s score to Night of the Blood Beast (1958). 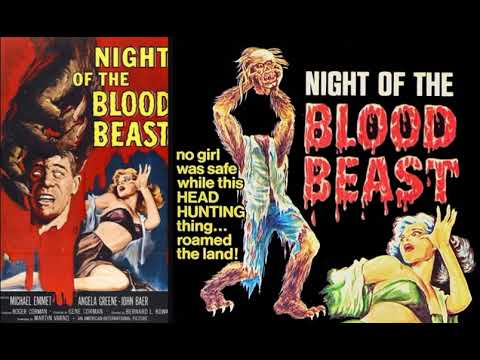 Those experiencing Deja Vu are not alone. Alexander Lazlo ported his Blood Beast (1958) music over to Attack of the Giant Leeches (1959). Another Corman film released the next year and a classic MST experiment.

Photographed in eight days including outdoors at the Los Angeles County Arboretum and Botanic Garden, Attack of the Giant Leeches (1959) paired with A Bucket of Blood (1959) and House of Usher (1960) on American International Double Bills. Spending $70,000 and casting Playboy’s Miss July 1959 Yvette Vickers as Liz Walker, they spared no expense or did they? The Holoclowns, Patches the Leech, The Insty-Adolescence Kit, Undersea Kingdom, Weird Dreams, “A Danger to Myself and Others”, The Motives o…

Oh, I wish I knew what this short was about.
And that perving angel’s creeping me out.

It’s another one where the short overshadows the movie, but Blood Beast is still a pretty good watch. I think Steve and Steve will agree with me. Who knew NASA in the 50’s was such a small organisation?

I’ve been told that the short has something to do with phones, much as A Young Man’s Fancy pushes the wonders of electrical appliances. If so, it’s being oblique about it. Instead, it appears to be an odd playlet about a songwriter who is about to go consummate with his wife after having gotten married a year ago. That’s when he gets a call informing him that a show’s prima donna wants him to have a song rewritten by tomorrow. So, an angel named Wilbur is sent to aid him. This is the source of my primary gripe with the short. I’ve always despised the Celestial Bureaucracy trope (C.S. Lewis has made it clear that bureaucracy is a better fit in Hell’s portfolio), and here it gets cranked up to eleven. What’s more, it’s a musical in the fashion of Design for Dreaming, only more grating.

As for the feature, it’s pretty much a rehash of It Conquered the World, but with a smaller cast and a more compact setting. Also following the Roger Corman creed of cinematic reduce reuse recycle, the monster costume had previously been seen in Teenage Cave Man and is even being worn by the same guy. While It Conquered the World is one of Corman’s stronger efforts, this (which he technically only produced) is an inferior product on every level. The primary blame rests with the underwhelming performances by the cast. In particular, the actress portraying Donna is incredibly lifeless. I wasn’t at all surprised to learn that she only has two other credits in her filmography.

This episode is noteworthy in how it has two sets of host segments. The first set is Thanksgiving themed as part of its initial run in the 1995 Turkey Day Marathon, while the latter are a more conventional lot. Personally, I prefer the former, which contain some truly brilliant material. The Stuffing vs. Potatoes is hilarious, though the claim of stuffing being a superior vehicle for gravy is one I regard as dubious. However, one thing that is incontrovertible is that mincemeat is nasty. Meanwhile the standard host segments fall flat. IMO Dr. Forrester and Pearl don’t mesh well. With a couple of exceptions, their interactions are pure Deep Hurting and the ones in this episode are the worst of the lot.

This is a top-notch episode, with one of the best shorts ever. I mean seriously, Cary Grant and Ginger Rogers? Oh wait, it’s not that Once Upon A Honeymoon. Still, it is a hoot, and one I reference often… “I want more wishing in the wishing song!”, and every time I hear Bad Co.'s Rock and Roll Fantasy, I have to belt out “It’s all part of my kitchen fantasy”. The fact that they were trying to sell phones with this thing, it just boggles the mind.

We also get a Roger Corman movie, and I love me a Corman movie, whether riffed or un-riffed. This is a pretty bad one, though. Fortunately Mike and the Bots are there to see us through it. The riffing is on point right out of the gate, and you know you are in for a fun ride by the tone they set during the opening credits. The cast is tiny, and the acting wooden, but I will take Steve and Steve in a cage match between any 2 Kens from any other movie.

It is definitely worth having the Vol. 16 set for the two versions of the host segments. I always watch the Turkey Day segments when I pop in the DVD, but I haven’t done that in a while. My Season 7 rewatch starts this week, so I will have to make sure I take in both versions of the segments when it gets underway (I have a couple more season 6 episodes left first). As a former band geek (I have been a geek of many stripes), I do enjoy the trombone lesson segment, but otherwise the Turkey Day segments are better from what I recall.

This episode is also proudly featured as one of my prized signed mini-posters: 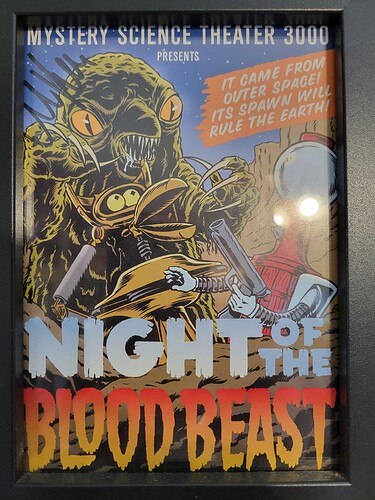 Between the two, I definitely prefer the Turkey Day host segments. They’re better written, Mary Jo gives my favorite performance of hers as the Comedy Central version of Pearl, and I can never get enough of Mike as ‘Smilin’ Jack Perkins.