Roger Corman is an institution. “The Pope of Pop Cinema”, “The Corman Film School”, New World Pictures. Producer, Director, The Godfather of New Hollywood, he employed the likes of Jack Nicholson, Francis Ford Coppola, Martin Scorsese, Peter Bogdanovich, Ron Howard, James Cameron, and Monte Hellman. Giving each of them their first jobs in the business. Jonathan Demme, Gale Anne Hurd, Robert Towne, Curtis Hanson, Joe Dante, Nicolas Roeg. The names go on and on. Roger is the Stan Lee of motion pictures. No one man has enabled so many careers. Current Plot, Servo Aces Test, Spoons, Lydia, Digger Smolken, Mike Is Leonard Maltin. “At Chili’s we flame-broil our credits to perfection”, “Ah The Great Malibu Credit Fire of 1956”, “It is kinda ironic cause all these people work at Embers now.” “Roger Corman’s Backdraft” or “Smokey says Only You Can Prevent Roger Corman”? 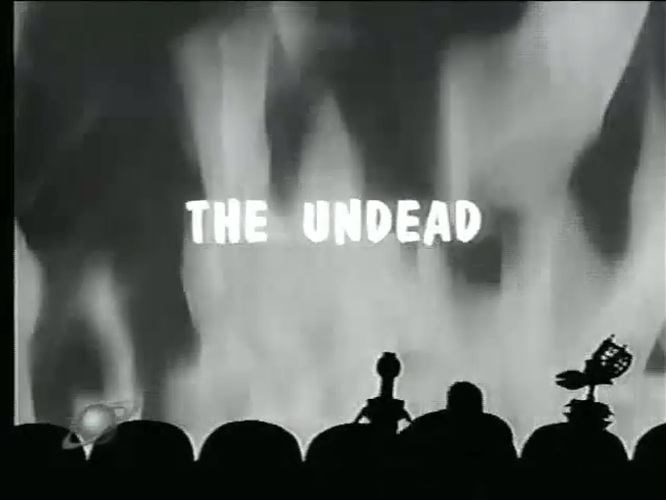 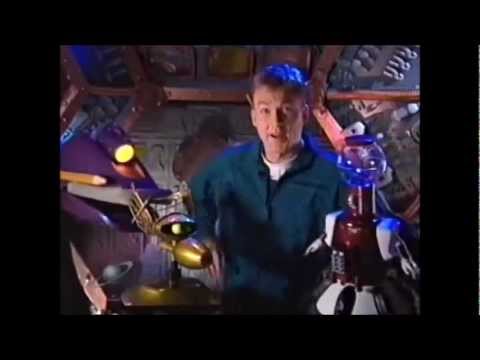 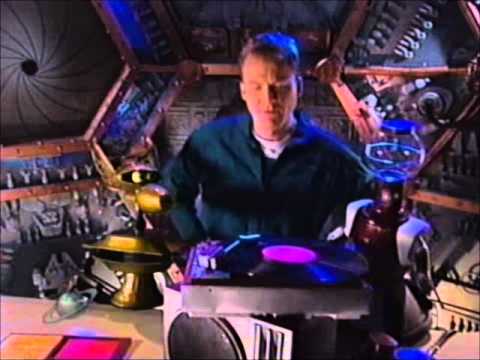 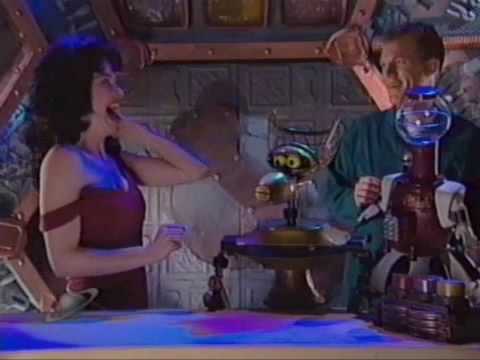 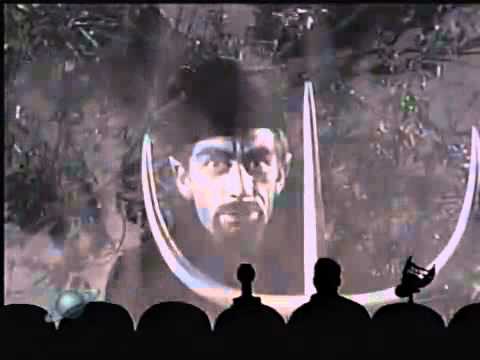 Are You Ready To Rock?

The Witch Has Escaped. 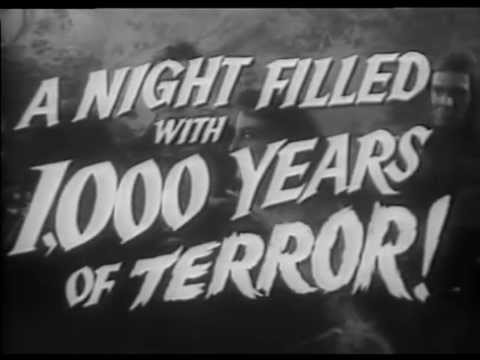 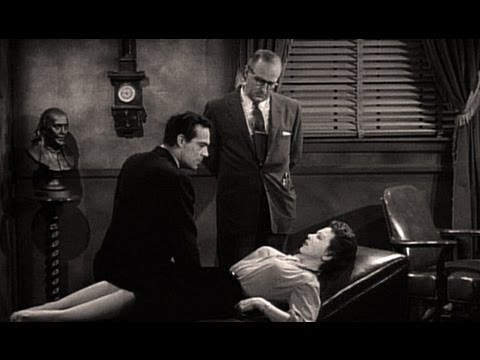 The Devil’s Entrance and Dance of the Dead. 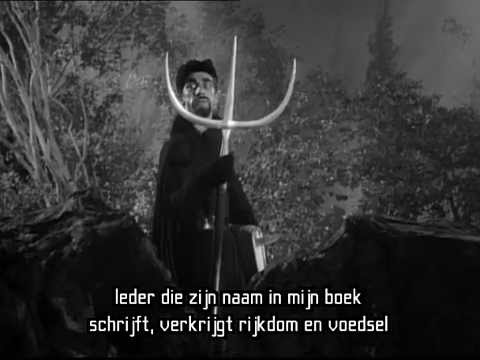 I love this episode. Even when they rely heavily on padding Corman movies usually have something to make them worth watching. This one avoids the padding problem, unless you count the present hypnosis scenes as padding, and moves along at a good pace. It’s got a great mood, the characters are memorable, and Corman’s actors do a good job bringing them to life.

You have to wonder if Smolkin is just playing up the cursed angle to get away with acting however he wants. Remind me to try that. Meg, Helene, Billy Barty’s hammy imp, and even the amazingly stupid PENdragon are all good fun. Allison Hayes as Livia might be able to tempt me to lend the Devil my soul for the weekend.

The host segments are good, too. We never get an explanation for Servo’s sudden intelligence, but I imagine we’ve all known people who just test well and have no ability to apply that knowledge. I love Bridget’s brief appearance as Lydia the witch with shapeshifting problems, and the Smolkin record sketch is enjoyably silly.

This also has the infamous Bobo sandwich sketch. I get people not liking it because of the length or the horror of Observer’s brain trauma, but I like it. The fact that it’s one long take with lots of prop manipulation in the Bobo costume, which must be cumbersome, is really impressive.

I agree that this is another fun one I revisit fairly often, like a lot of Season 8’s episodes. Thank you, @Dr_Phantom, for sharing all the reasons why.

Another misleading title, in this case because there are no vampires or zombies or the like. In fact, I can’t think of how it’s even vaguely relevant to the actual film. Of course, the original title of The Trance of Diana Love has strong allusions to the story elements concerning past life regression, a fad that was starting to become passé during production. So they added some time travel and a neat little ending that makes it rather like a feature length middle of the road episode of The Twilight Zone.

Really, it’s one of Corman’s better efforts and doesn’t deserve the harsh reactions of the Brains. Now granted Leonard Maltin’s three-star ranking may be overly generous, the old timey English is kind of silly, and the sets are laughable (there’s one instance where a prison wall wobbles just like the sets on Doctor Who were alleged to do all the time). However, the narrative holds together reasonably well. Though there are a couple of instances where Pendragon is required to be a gullible idiot. Digger Smolken is a memorable supporting character, with his songs and his at least partially feigned madness, which he uses to play mind games with the other characters. Memorable in a different way is the witch Livia (portrayed by B-movie bombshell Allison Hayes), mainly due to her very form-fitting dress. Seriously, it looks like one sudden movement would cause her breasts to pop out.

During my most recent viewing, I noticed something I missed in previous instances. When Quintus talks with Satan, the latter indicates that this is not his true identity, and he uses it because it’s something the populace recognizes. This has me thinking that perhaps he’s Nyarlathotep. After all, Corman is something of a Lovecraft fanboy who had directed the very first film adaptation of a Lovecraft story. Also, Nyarlathotep is shown running an operation like what’s seen in the movie in The Dreams in the Witch House.

Love, love, love this episode! As I said in the vault picks thread, my favorite bit is any time they speak as the modern-day prostitute in the shrink’s office. They fact that they make her super-erudite but also gave her a heavy Bronx accent is just brilliant.

Also a couple of my favorite lines are during the hypnotism scene:
“We will be one” - “We’ll be me, for convenience’s sake”
“First slowly…” - “…then fastly”

I think that both the sandwich sketch and the spoon sketch are fine ideas which just ran way overlong and started to feel desperate. Unless that was the point, what with this being COR-man and all.

I agree this one is better than many others in his oeuvre. But it’s still at its goofiest when it struggles to be profound. The characters’ key actions frequently don’t make sense. Why does Meg-Maud decide to protect Helene? Why does Quintus bellow “STAY!” at her when he told us five minutes before that he didn’t care who “won” this whole thing anyway? Also, the half-assed explanation of why he’s stuck in the past, physical form and everything, is really absurd. I think COR-Man just had that reclining empty suit effect handy from some other movie. He hates to waste anything.

He hates to waste anything.

On that note, we should remember that this was shot in a cave! With a box of scraps! in six (or possibly ten) days in a supermarket. It would be the most Corman thing in the world if it had been in a working supermarket, but sadly that’s not the case.

Cue up the crossover with Emily’s old Turkey Day short about supermarkets.