Hiya.
It appears that the Backer-only Preview Livestreams are no longer available on either VHX or in Virtual Theater Vault.
If this is an intentional thing as the Public Premier Livestreams are now available, I’d like to ask that the Powers That Be consider adding as Event Replays the pre- & post-episode content from the Preview livestreams. This content was unique, interesting, and for 1301–featured the origin of White Dot.
Thanks for the consideration.

I’m a uniter, not a divider.

I should also mention I’m fully behind bringing the original previews back for the backers. The extras could even just be extras on the gizmoplex for all, in the not too distant future.

I, too, would like these to return, not just for the continuity of White Dot’s character arc and the Q&As; I also really enjoyed the original intermission in Santo!

They are still in the app. So I imagine that it’s just a bug, or a temporary issue rather than any sort of “removal”

Again, those livestreams I see have the date on the ticket from last weekend–not the preview dates.

Did you get your issue resolved? I still see both. 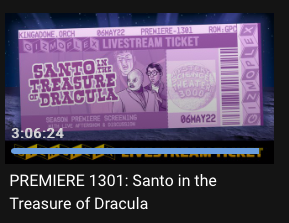 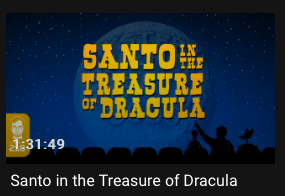 Look at the play times–livestream has intros, commercials, and post-film discussion. Missing only “white dot.”

My only worry is that we might not be able to download the raw Livestream versions. I’m hoping that the messed-up date on the livestream "ticket"means that both downloads will be available this week.

Seeing the original White Dot material was like buying the Velvet Underground record when it came out - only a handful of people did it, but all of those who did started their own Dot.

What’s missing are the events labeled as PREVIEW for 1301, 1302, and 1303. They were the “rough cuts” of the episodes (with no credits) and completely unique livestream elements like the Q&As and the papermations controlled by string.

As of this morning, all three continue to be missing from the Gizmoplex.

Due to real life issues, I had to join the Season 13 party later than I anticipated and even though I backed through Kickstarter, I missed all the prelaunch shenanigans. While I was going through a tough time that kept me away from the new MST3K I kept telling myself that it would all be preserved here in the Gizmoplex.

Life continued to be rude to me for another 6 weeks and the first thing I find when I come back is this thread. So I know I’m not losing my mind and there are other people in my same boat.

Any word on these prelaunch livestreams being restored to those of us who paid hundreds of dollars to support Season 13 but might have been too busy being kicked around by life in general to enjoy them with everyone else? It’s bad enough that I had to miss the community of these events, but I’d hate to think I’d never get to see them.

Even if you don’t want the rough edit versions out there anymore, could we just have the post-episode livestreams? They’d be fun to revisit.

At the VHX site, look for the titles with the ticket stubs:

Those should be the event replays.

EDIT: I take this all back, those are the replays from the public opening week. We are reasonably sure, the backer-only events were removed. They were basically beta tests of the systems, and there were problems with various things such as the audio.

I could understand wanting to keep those from any new customers signing up to the site since launch. But if people were here for the early beta, I think they know what they were getting watching those.

Personally, I’d prefer to have the option to watch both. I thought part of being an early backer and not joining after the live launch would be to have continued access to all the beta releases.

I think of them as the Synthia Selects. Gone if you didn’t see it