My wife isn’t as into MST3K as I am, but the last couple of years we have had a Christmas tradition where we watch “The Christmas That Almost Wasn’t”. Are there other holiday episodes y’all would recommend? Especially with the upcoming spooky season - any good Halloween episodes?

For Halloween the first episode that leaps to mind is Hobgoblins, but that’s a pretty tall order for someone who’s not a diehard fan. So I’m going to recommend The Undead – a reasonably “good” movie for its time, top-notch riffing, and it has witches and bats and the devil. 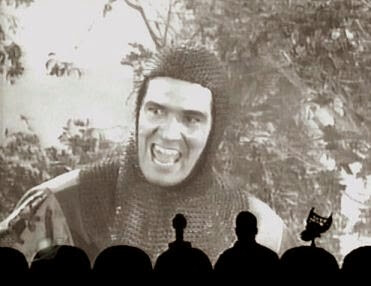 The Unearthly - SO ridiculous, but I bet it did scare a few people back in the day. Plus it’s got Carradine in full Sylvester The Cat mode and that amalgamated board game sketch.

Zombie Nightmare is also a good pick because of Adam West, the music, and of course the glory that’s the Twist 'N Creme. (Jeez. How did I forget to add the Batman sketch to the thread about great sketches? I must need a Doctor of Old Woman-ology or something. :o )

I’m gonna say it, The Corpse Vanishes is probably my favorite Halloween-themed MST3K.

Santa Claus Conquers the Martians is a tradition for me in some form. The classic and the Cinematic Titanic are my favorites.

Of course all episodes are Holiday Episodes on Turkey Day…

You kind of have to watch Manos: The Hands Of Fate on Easter because of the Chocolate Bunny Guillotine invention exchange.

I think Teenage Crime Wave is the only movie actually set during Thanksgiving, though.

It feels like so much of Season 8 would lend itself pretty well to Halloween mini-marathons. Just choose episodes that don’t deal with spy shenanigans or high-gloss action, and you’re in business!

I also like The Giant Gila Monster and The Incredible Melting Man for such purposes.

And don’t forget that Mitchell and Girl in Gold Boots are technically Christmas movies.

For Halloween, go with a classic monster: Warwulf! - uh, I mean Werewolf.

Seriously though, my friends who aren’t into the show as a whole really loved that episode when I showed it to them.

“Good King Wenceslas looked out, On the Feast of Stephen”

“And the Christmas guys did shout”

“At the Justin Bieber”

“YOU HAD TO PICK THE ONE SONG THAT NOBODY KNOWS THE WORDS TO!!”

“Yeah turns out the Holiday is all about Jesus now!”
I’m going to say The Christmas That Almost Wasn’t

I’m not ashamed to say:
the musical slideshow at the end of The Christmas That Almost Wasn’t made me tear-up with happiness.

It took me by surprise, and was quite heartwarming.

A great way to get into the Thanksgiving spirit is to watch old Turkey Day Marathons. 1991 and 1992 are pretty much intact on YouTube, commercials and all! Seeing Trace and Frank in Turkey Day segments and then singing-along with Comedy Central’s old SNL Merrython commercial always puts me into good spirits.

Was it Hercules Against The Moon Men which has them calling “Gobble gobble gobble!” when Samara is seated on her gilded feather throne? There’s your run-up-to-Thanksgiving episode!

I forget who pointed out to me that the ultimate Easter double bill would be The Indestructible Man and Bloodlust, for what are probably obvious reasons. (Chicken Of Tomorrow should be shown in between, of course. RT fans could work Night Of The Lepus in as well.)

Swamp Diamonds would be the go-to for Mardi Gras, of course.

Heh. I love to celebrate 7/4 each year by watching Rocket Attack: USA and Invasion: USA as a double feature. I could never endure either movie without riffs, though. My joy absolutely comes from watching Our Heroes shred all that bargain-basement patriotic drivel.