I just watched “Star Trek IV: Journey Home” for the first time; holy cow is it bad. I would love to see it riffed. Which Star Trek would you want to see riffed?

I’d like to see some of the original episodes riffed. Specifically Trouble with Tribbles and the Gorn episode. Any of the movies are riffable.

If you want ridiculous Star Trek to riff, you have to start with episodes of “Star Trek: The Animated Series”.

As for the films, it depends if you want the best riffing material or the worst film:

I just watched “Star Trek IV: Journey Home” for the first time; holy cow is it bad. I would love to see it riffed. Which Star Trek would you want to see riffed?

Star Trek V : The Final Frontier. An absolute study in pretentiousness. Not Shatner’s finest hour as a director.

I’d like to see some of the original episodes riffed. Specifically Trouble with Tribbles and the Gorn episode. Any of the movies are riffable

I’m going through the original series for the first time in my life right now. I saw clips, bits and pieces before, but never sat down and actually watched them intentionally. I can see the charm, but OMG, those sets? Those costumes? Ridiculous. And I can barely tolerate Shatner mugging for the camera every five seconds and the camera man’s apparent love for the Shat’s face.

Just got to and finished the Gorn episode during my lunch break today, ironically. Actually a pretty good episode story wise, but that Gorn costume? Ugh. I could make a better one than that, and I’ve never made a costume in my life! Plus the action scenes were painfully slow, drawn out and badly “cooregraphed”, if you can even call them that.

With all that being said though, I DO see the charm and the potential in the series that spawned a thousand episodes and careers.

Riffing The Trouble with Tribbles would be amazing.

I really enjoyed this installment as well. The goos thing about a potential riff of (the voyage home) is that it is quite humorous and word work well for the Msties who are now the future of the franchise… “Give the people what they wand” The Kinks

There was a hilarious tape circulating at cons shortly after the first Trek film came out (ages ago now) that had Rifftrax-style vocals and sound effect layered over it. The makers really connected how the film was largely an inferior remake of the Nomad episode. I think this movie would make good riffing for MST3K.

I LOVE Star Trek. There are good ones and bad ones, and I love them all, but they’re not sacred or anything.

Star Trek: The Motion Picture probably has the most fodder in it, and the flying-through-VGER scene is sooooooo long, It feels like 30 minutes of people looking at special effects. And those costumes. Oof.

I’m a big Godzilla fan, too, and those episodes are some of my favorites. There’s an affection for the silliness of the whole Godzilla concept that comes through in the riffing. It’s kinda sweet.

I would suggest, though, that anybody that thinks ST IV is terrible should watch a lot more bad movies for calibration. It’s got it’s issues, certainly, but there’s so much worse out there. ST I and III, for example.

Notoriously “bad”, silly, and/or cheesy episodes would probably be a lot of fun. Some that immediately come to mind are Spock’s Brain (TOS), Sub Rosa (TNG), Move Along Home (DS9), If Wishes Were Horses (DS9), The Thaw (Voyager), and Threshold (Voyager). Holodeck episodes would probably work well too, especially something like Take me Out to the Holosuite (DS9) and Qpid (TNG).

Riffs would certainly make Enterprise’s “A Night in Sickbay” palatable!
I’m up for any of the movies RiffTrax hasn’t already tackled. From the infamous pacing of The Motion Picture, Christopher Lloyd and odd Vulcan adolescence in The Search for Spock, and inexplicable Gilbert and Sullivan in Insurrection, the movies are ripe for riffing!

Star Trek V without a doubt. It’s completely goofy and somehow completely self serious. It ends with Spock shooting god in the face with a photon torpedo. Come on.

Not seeing much love for Star Trek V.

I don’t know, I think the days of TFF being the worst Star Trek movie are long over. I think Into Darkness would provide great riffing material.

The Thaw always gets a lot of hate, but I always found clown Michael McKean effectively creepy. But agreed, there’s enough Cirque-de-Soliel weirdness to make it riff-worthy.

Gotta be Star Trek V or The Animated Series.

I mean Trek has its fine moments even great…but there are some low moments too.

I would also recommend Deep Space 9’s episode…Move Along Home…ugh.

I think Star Trek IV wouldn’t be the first one I’d pick because it’s intentional comedy for most of it. Which you could do, but there’s also the fun of riffing TMP and its overly long establishing shots of the Enterprise and Star Trek V and its weird plot revolving around god and Spock saying marshmelons for some reason

Have you ever heard the KQRS bit “Scotty Hates Kirk?” It’s from decades ago but you’ll never hear anyone have more fun zinging Shatner (especially about some of the mugging) than James Doohan. 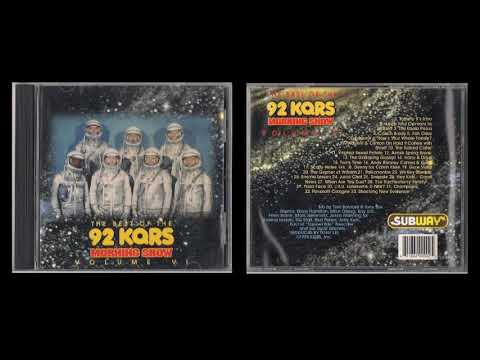 Star Trek: The Motion Picture. I remember the movie being slow and taking forever to travel to the center of the energy cloud thing.

Also, with the name V’Ger as the being, I see some good riffing opportunities.

“Star Crash”-style music interlude, but in ST:TMP you’ve got enough time to put in a full opera.

(Full Disclosure: I actually enjoyed ST:TMP, except for the dumb rehashed plot.)