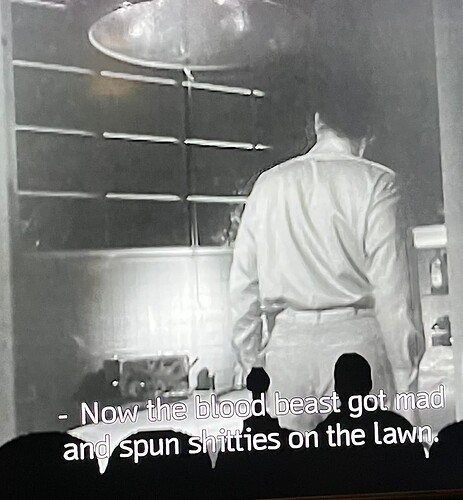 Split this off into its own topic so @ivan’s team will see it.

If anyone else has noticed caption issues like this in Blood Beast, please note them here. And don’t forget to vote!

Actually, you know what? I think that is what he said. It’s a variation of “whippin’ shitties” (also new to me, but hey it’s a thing): Urban Dictionary: whip shitties

It may have slipped by, or falls under the same umbrella as “dickweed” in that yeah it has a bad word in it, but the usage here is not technically referring to that word.

I always thought he did say the line as it’s captioned, but I also have a terrible case of lyritosys (inability to comprehend song lyrics) that bleeds over into understanding dialog, so I’m not an authority here.

I haven’t watched it recently to know one way or the other. It could be correct per @Chris_Combs’ definition, but it might be worth a double-check by the team just to be sure.

” when we watched this one this month.

Definitely a Midwest thing. And my high school friends were doing it in the late 90s, so it’s not a new phrase either.

(And for those not from around here, the phrase means the same as doing donuts like a NASCAR race winner. Personally, I like my tires with tread on them, but

Shared the caption with a friend, and he says “that’s straight from a Tom Waits lyrics generator.”

Which I think is also correct.

Try explaining that to my dry cleaner

It was spinning donuts when I was a teen here in Utah.

Oh, you call them “regionalisms?” That’s not what we say 'round these parts.