Yes, I’ll miss twitter. It’s been useful to me in many ways.

I may have just quasi-volunteered-been-drafted-roped-into helping with a history of my soccer club’s early years.

Well said. They’ll do in a pinch, but if I’m craving M&Ms and have all varieties available to me, they’ll be my last choice. I think we’re in a minority here – most people I know seem to be crazy for them.

I like peanut M&Ms, but my problem with them is that for the same size package you get so many fewer candies compared to regulars just due to the difference in weight per candy.

I just thought of something. A lotta people may love Japan, but to me, it’s more than just anime, video and arcade games, food, and its culture. Only I know what I’m talking about.

The DMV is probably going to make me do something stupid when I call them to renew my driver’s license (reinstate, actually, since I no longer am required to have a Hardship Permit to commute to and from work).

I don’t know what they’re going to make me do, but I’m sure it will be really dumb.

/* ETA HEADLINE UPDATE NEWS : Well, it’s not that stupid. I’ve been instructed to call back tomorrow. Of course that contravenes the written policy as I understand it, but “Ronnie” said to do it, so I will. */

L.A. to Chicago is not coast-to-coast.

Maybe she means the coast of Lake Michigan?

Though if we’re going to start taking issue with pop stars, can I say that maybe Bonnie Tyler wouldn’t be having these total eclipses of the heart if she just dialed it back a bit. “Hug him till his arms break”? “I need a hero”?

I am reminded of how it took me a while to realize that yes, he was moving across the country in Fresh Prince of Bel-Air and not going to the Bel Air that I heard on the weather reports.

That’s ok, I used to watch Three’s Company as a kid and was completely oblivious to the sexual innuendo.

They spell it wrong as well.

Am I the only one who sees a face in the Sci-Fi era door sequence? Maybe kinda looks a little Dr. Forrester-ish? 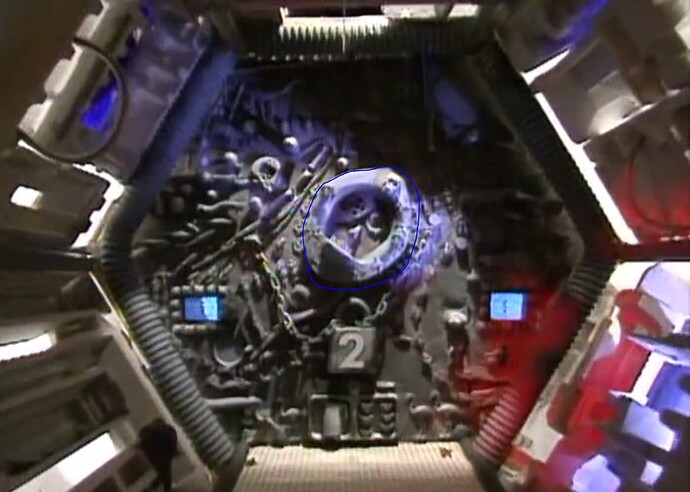 I always thought it was a face.

I’ve always seen a face. That’s not an on-purpose face?

It’s just hidden enough to where I’m not sure whether I’m supposed to see it or not, and nobody ever mentions it.

Hmmm…it just occurred to me that it’s not really an effective jibe to call one’s mother a MF. I think I knew that! But I suspect that might apply to one’s friends and so forth who happen to be mothers of children!

However, it is always appropriate to call one’s father a MF…if he has a sense of humor!

Think about it! Yeah, that’s right!