Directed by a salad fork. Starring what’s that on your shoe?

My first casting decision would be for J.K. Robertson. To me there could be only one first choice: Jack Palance. This role would have been so perfect for him. Actually, I would love to have had Jack Nicholson for that role too, but I figure he would have been too expensive for a movie of this type.

I considered a few other actors for the role – Dabney Coleman, Dean Cain, Alan Alda, and even Linda Hunt as my wild card pick – but Jack Palance was born to play this role!

And Matthew Paul has definitely got to be Bruno Kirby!

Oooh, Linda Hunt would be epic! She always has such a strong personality no matter what character she plays.

She always has such a strong personality no matter what character she plays.

Absolutely! It’s indefensible, in my mind, that they never wrote a Bond villain role specifically for her. She would have been an awesome nemesis!

I hadn’t ever thought of that before, but now that I have, I absolutely agree with you.

It boggles the mind to think of what could have been had she been cast in the role of Sumuru . . .

I know Henson and Raposo were no longer with us in 1994, but we’ll think of someone good!

I think Fozzie fits the Pink Boy role better than Gonzo. Gonzo would be great as the cab driver, though. Actually, split that character in two, with both Gonzo and Rizzo in the front seat of the cab for some reason, playing off each other. And Beauregard as Marty.

All the people jogging by in the “Utopian” future are Muppet Penguins and Rats. And in the “dystopian” future the twitchy guy is Animal and the filthy couple are Dr. Teeth and Janice.

And if we fit this to the 1990s post-Jim-Henson Muppet movies, we have to find a respected English actor known to American audiences to play a key role. So J.K. Robertson should be … I’m gonna say … Alan Rickman.

Was A.R. well-known to U.S. audiences back then?

I know there’ve been human actors playing villains before, but the role of Robertson still seems custom-made for Sam.

The more I think about it, the more I think that Janice would slay as the cabdriver, given his nonsensical monologues about Mother Earth, etc. that were cut from MST3K but which made it into RT. (We can skip the racism, though.)

J.K.'s enforcement squad could be Gonzo’s chickens. But the penguins could be the guards who rode in the limo with him, and the rats could be the warriors of the dystopian future. The revolutionary fighters? Dogs, led by Rolf. The Brits could be pigs, led by Colonel Hogthrob.

If you wanted a human to have a pivotal role, they could be narrators from the different eras. Maybe newscasters or balladeers. And hijinks could ensue when they bickered about which one came from the “true” or “correct” time. The Muppets would have to make them shut up so the story could proceed.

I know there’ve been human actors playing villains before, but the role of Robertson still seems custom-made for Sam.

I can easily see Sam in that role. Think of the speech he could give when they go into the past times!

“You knew FULL WELL the power of the transport!! You weirdos!!”

“Destroying the future for profit is the American way!” 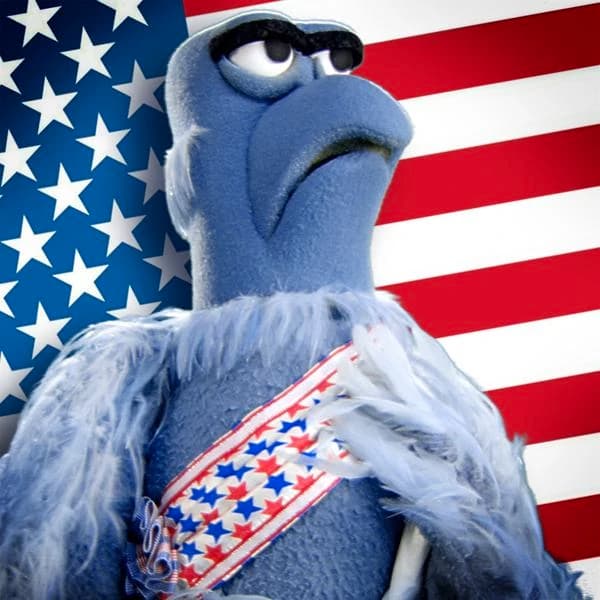 Already more timely then than we could really appreciate.

Actually, split that character in two, with both Gonzo and Rizzo in the front seat of the cab for some reason, playing off each other.

Gonzo’s legs aren’t long enough, so he needs Rizzo to work the pedals.

Was A.R. well-known to U.S. audiences back then?

He was the villain in Die Hard. Which was co-written by Steven de Souza. Who was story editor for Gemini Man AKA Riding with Death. Everything comes back to MST3K.

If you wanted a human to have a pivotal role, they could be narrators from the different eras.

If there are narrators, I insist that they be Statler and Waldorf.

Ok – having cast Jack Palance as my J.K. Robertson and Bruno Kirby as Matthew Paul, it’s time to move on to our two leads. There’s a part of me that really wanted to cast Nicholas Cage as Nick Miller. He would bring a great energy to the role. But I went a slightly different route and selected Jeff Goldblum as my Nick. He has the dramatic gravitas to get the audience to buy into the premise of the movie, but also the quirkiness necessary for what is a rather quirky movie.

For my Lisa Henson, I’m going with Melanie Griffith. While I’ve never been a big fan of her work, I feel she could handle the dramatic and light comedic aspects of this role. Plus, I think her presence would help reassure potential audiences that this movie is not serious, heavy sci-fi; it’s fun, adventurous, romantic sci-fi.

And since it is 1995 and every movie needs a sassy gay supporting character, I’m casting KITH’s Scott Thompson as Marty.

The working title is From Time To Time.

Still trying to close a deal on a director for this blockbuster.

I’m going to push mine back a bit earlier and tweak the genre to bring in the Groundlings.

Nick: Paul Rubens
Lisa: Cassandra Peterson, because seeing the two play off each other in a “romance” would be hilarious.
Robertson: Tommy Chong or Jon Lovitz
Matthew Paul: Cheech Marin (swich Cheech and Chong as desired, but this was my immediate vision) or Glenn Shaddix

Phil Hartman can be anyone he wants to be. I’m sure we can fill out all the other roles pretty easily.

This works particularly well if you read it with the voice of Mike Nelson, Hollywood Mogul from the finale of Final Sacrifice.

That’s the head-voice I was listening to when I wrote it.