In Starcrash Crow creates a screenplay with the characters from Candyland. It turns out that there’s an animated movie based on Candyland. Candy Land: The Great Lollipop Adventure (2005) HD - YouTube
While looking this up I found a PBS article about the story behind this game. It was during the 50s polio epidemic that many children were stuck alone in hospital wards. A former school teacher felt these lonely children needed a simple game to play together. It required no reading or math skills allowing toddlers to play. After being released she pitched it to MB. The royalties went to charities.

The funny thing to me is that a scant few years later, Candyland became a movie, and for the past 15, a “dark, gritty” Candyland has been in production (currently scheduled for a 2024 release).

Because it’s a stupid idea. And stupid ideas can only be salvaged by being dark and gritty.

Yeah, one came out when I was young. I was a little nervous looking things up. There are horror-ible movies that are easily watched. Then there are horror movies that you watch with the lights on well before bedtime. The sequel to The House On Haunted Hill is much scarier than the Vincent Price one. Pretty much every Vincent Price movie lands in the horror-ible category. Although the Brady Bunch does scare me with their optimistic attitude, so I give him credit for that.

Interesting definition of “salvage” there.

Imagine yourself trying to pitch “Candyland: The Movie” to a cynical Hollywood exec.

"We’re gonna cash in on the Pirates of the Caribbean craze!
“Great! How?”
“We’re gonna make Candlyand: The Movie!”
“…”
“…”
“What, that dumbass boardgame for babies that is entirely random chance?”
“Yeah!”
“Get outta my office!”
“Wait! We’re gonna make it dark…and gritty!”
“You have 30 seconds.”
“All right, so King Kandy and Queen Frostine (Kevin Branagh and Kim Basinger) rule over the Candyland, but it’s, like, a mob thing—they’re running some kind of dentist/pornography racket while presenting themselves as upright rulers—and Princess Lolly (Scarlett Johansson) finds out about it, right? So they send her to the Molasses Swamp where Gloppy (gotta be Mike Myers, right?) is, like, oozing all over her, and the Duke of Swirl (Vin Diesel, or if we can’t get him, this new guy called The Rock will do it) teams up with Mr. Mint (Wil Smith—we’ll get a Men In Black thing going) who’s a dentist who’s beginning to suspect that what’s going on in The Peanut Brittle House ain’t exaclty Kosher…”

I mean, it practically writes itself. Princess Lolly’s gonna discover that the King and Queen killed her real parents and she’ll discover the seedy underbelly of refined sugar and high fructose corn syrup.

I mean, Candyland: the Movie is something because the executive came to you, not the other way around.
“It’s what the network wants, why bother to complain?”

Sure, sure, but you gotta pitch your explanation for why it needs a nine-figure budget! How you’re gonna make a ridiculously simple amusement park rideboardgame into the next unstoppable franchise!

Today, you know the discussion couldn’t be had without a thorough explication of the “Candyland Cinematic Universe” or maybe the MBCU! (Milton-Bradley)

…and this is one thing that makes me glad I’ve essentially dropped out of mainstream media. 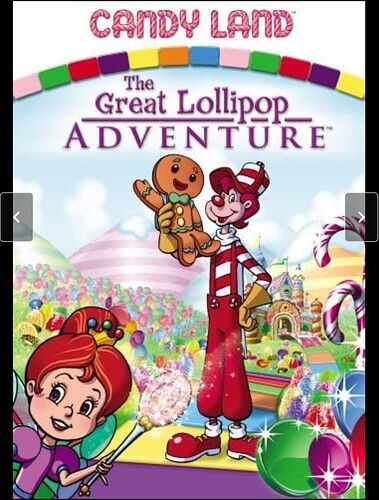 Some of those movies people should be paid to take off their hands. I have found a few good things. It was probably where I got my Jurassic Park DVD. Some 80s cartoons can be found in them. If you want absolutely garbage movies look in the dollar stores. Those are too lousy for any riffing program. Besides, showing them to Joel, Mike, Jonah, or Emily might violate the Geneva Convention. I haven’t actually read it. They didn’t have the foresight to put anything about movie torture I bet.

Yeah, I thought I mentioned that. But this wasn’t the “gritty reboot”.

You probably did. My eyes get sore when I read too long. I might have missed it because I get notifications about certain parts of threads.
There were some horror movies that came out when I was really young with similar names and/ or premises. Obviously I wasn’t allowed to watch them. I’m pulling at memories that are about 30 years old.

There were some horror movies that came out when I was really young with similar names and/ or premises. … about 30 years old.

Similar names, for sure. Candyman and its sequel (Farewell to the Flesh), Ice Cream Man…later there would be Gingerdead Man and Hard Candy (with the relatively unknown Patrick Wilson and Ellen Page)…uh…Ginger Snaps…Killer Klowns from Outer Space…

I can’t think of any with really similar premises to Candyland. Maybe aspects of Klowns, particularly inside the ship, which is otherwordly. Generally, though, horror movies don’t have that kind of budget. Maybe the Phantasm series.

When I was a kid it was a common way to scare kids by having them go into a dark bathroom, stare into a mirror and say Candyman three times. You’re supposed to see something in the mirror. They did something similar on South Park. Except they said Biggie Smalls.

Peter Graves wanders down a concrete path towards the School of Medicine.

“I’m Peter Graves, and I do research on sentient candy; here, at the University of Minnesota”.

((The rest of the screenplay had raspberry jelly all over it, making it unreadable.))