Discuss the movies for Season 13 (plus viewing poll)

Here’s a thread for discussing the 13 movies that were just announced for season 13. Specifically how many have you seen before? Which are completely new to you? Which look the most interesting or most painful to to sit through?

For anybody who missed the Turkey Day reveal, here are the titles: 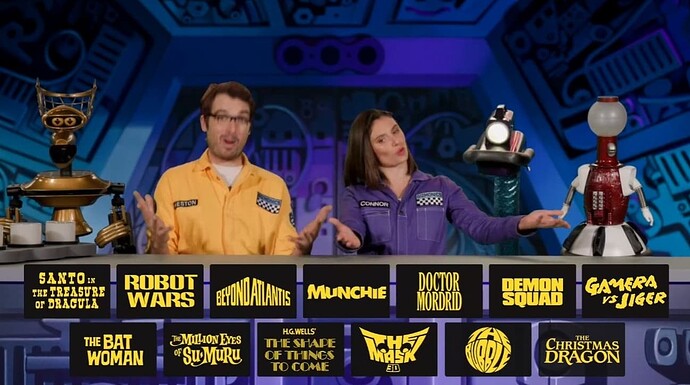 And here’s the poll:
How many of the movies from Season 13 have you seen before? (Check as many as apply)

I’ve linked to trailers to each of the movies above, and listed alternate titles, when known.

Apologies that I didn’t think to add a “none of them” option.

I unfortunately saw none of them.

Are you able to add an option for none of them? I’m curious as to how many haven’t seen any of them.

The fact that two of these have been done by RiffTrax will weigh pretty strongly here, I think.

Are you able to add an option for none of them? I’m curious as to how many haven’t seen any of them.

The fact that two of these have been done by RiffTrax will weigh pretty strongly here, I think.

The Million Eyes of Su-Muru was also one of the KTMA experiments, so I expect that one will top them all.

I do have to say, The Batwoman and Santo and the Treasure of Dracula both look spectacular. I always figured if they did another mexican wrestling movie, it’d be Samson in the Wax Museum, since that was the other K. Gordon Murray dubbed version released around the same time as Samson vs. The Vampire Women (It even reuses some of the same props, and obviously the same weird “Samson” name.)

Haven’t seen any, but I have heard of at least 6.

No worries! Thanks for trying.

Robot Jox and Doctor Modred were part of the Full Moon/Empire family of films and it’s kind of amazing the kind of foothold that Charles Band had on Mom & Pop video stores back in the day. I believe both were staples of the SciFi channel in their early years.

As for Munchie it was the kind of D-list children’s movie that basic cable seemed to slap on all the time. I’m pretty sure it aired on The Disney Channel back when they had a weekday afternoon movie block and before they were all-in on Disney Channel Original movies.

I’m looking particularly forward to “The Shape of Things to Come” and “Gamera vs Jiger.”

Munchie is weird because the previous installment was more of a horror movie.

Also, it appears that The Bubble did have a 3D version.

A couple are not new to the MST3K fanvid universe: 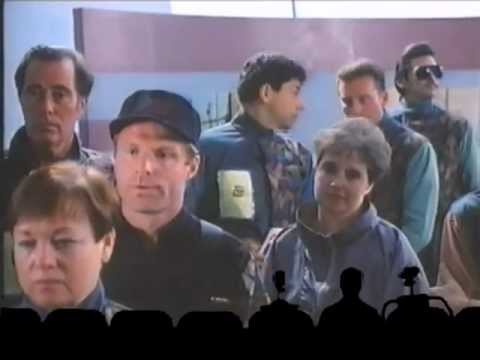 Beyond Atlantis didn’t escape the riff treatment, either: 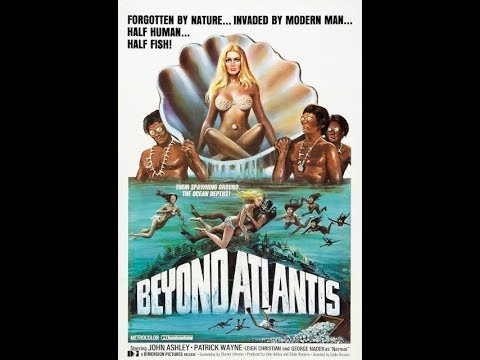 These I’ve seen unriffed, unless noted

I’ve heard of but not seen Munchie and The Bubble

Santo, Demon Squad, and The Christmas Dragon are new to me.

The Shape of Things to Come is a very loose adaptation of the HG Wells story IIRC.

Robot Jox and Doctor Modred were part of the Full Moon/Empire family of films and it’s kind of amazing the kind of foothold that Charles Band had on Mom & Pop video stores back in the day. I believe both were staples of the SciFi channel in their early years.

I know that’s where I saw them.

I have to keep reminding myself that The Shape of Things to Come wasn’t one of those terrible Italian Star Wars rip-off movies like War of the Robots, Star Odyssey or Cosmos: War of the Planets… it just looks like one. (It was actually Canadian)

Robot Wars and Robot Jox are two different films, though them both coming from the same production company doesn’t help.

Ditto. None of them.

For the people who have seen Santo in The Treasure of Dracula, did you see an English-dubbed version… or one with American subtitles?

Or did you see the “sexy vampire” version that was re-discovered in 2011? 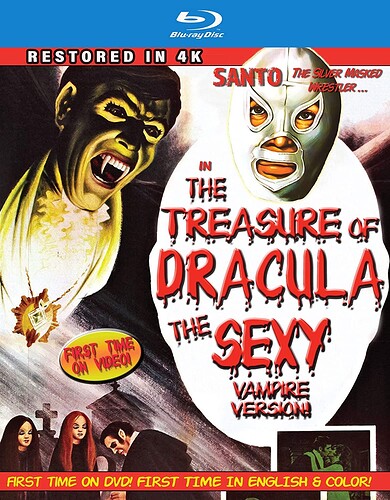 For folks who are wondering what the story is there, apparently the producer filmed some extra scenes containing boobies between the female actors and Dracula when El Santo wasn’t in the room with the idea of distributing it overseas as a “nudie” flick. But El Santo found out what was going on and objected on the grounds that this would tarnish his reputation as a wrestler, so these “adult” prints were never released, and the three copies sat untouched in the production company’s film vault until their discovery decades later. Which proved to be something of a blessing in disguise for both El Santo fans and MST3K, as the only surviving non-nudie prints of the movie were severely damaged and discolored or lower quality black and white transfers, but the discovery of these three original prints in excellent condition means that this is the only El Santo movie currently available in 4K resolution.

However, getting back to the dubbing… To my knowledge, only three El Santo movies were dubbed for their original US theatrical releases, though I don’t know if that’s something that changed for subsequent DVD and BluRay releases. Certainly the voices in the short trailer I linked to in the poll above sound… less than professional. But the single line of dialogue heard during the Turkey Day clip sounds more like the sort of dubbing you’d expect from a film of that era, so maybe this one did have an original dub after all, or the people doing the BluRay rerelease put some effort into trying to recreate the sound from that era rather than simply plopping a couple of guys down in front of a podcasting microphone.

Seeing most of the previews during the marathon (missed one or two fast-forwarding the 2-minute breaks on YT - possible since I only saw the 1st ep “live”), I’m really excited about the choices, esp. one being re-riffed from KTMA for the 1st time since season 3.

But the question remains: which one is this era’s Manos? (and is Munchie this MST3K era’s Rollergator?)