With Halloween getting closer it had me thinking of back when I was a child and what my favorite costume was. Growing up, I was raised as a Jehovah’s Witness by my mom and wasn’t allowed to participate in any holidays, especially Halloween. My dad was a truck driver and never home, but when he was home he would allow us kids to go out and partake in trick or treating, which happened twice

Being from the Detroit area Robocop was a big thing (mainly to kids) and found that cheap plastic/ vinyl costume with the flimsy cheap mask. My mom was pissed but I felt like a million bucks.

I don’t recall Halloween being a thing over here when I was a kid. But if it was I’m sure I’d have rolled out this Certified Big Hitter from Xmas ‘84. 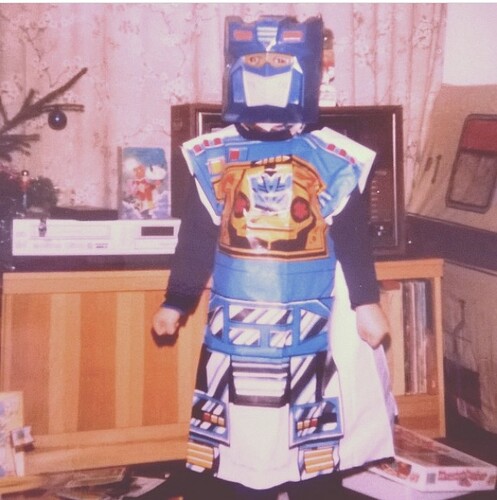 I’m English, and Halloween wasn’t that big a thing for us, it’s more of a deal now of course.

I remember getting wrapped up in bandages as a Mummy when I was about 8, but in University I dressed up as Dorothy in a big Wizard Of Oz group, and honestly have never looked back!

I know. And what looks like some very handsome wood panelling on that Telly. 4s. / 6d per month at Radio Rentals, at least

Cleopatra when I was 11 I think was my favorite. I was obsessed with Ancient Egypt at that age. My mum made it from the McCall’s pattern. I totally committed and got spray in hair color to turn my blonde hair black. My classmates didn’t even recognize me and that was an extremely proud moment. The hair color wouldn’t wash out and turned my hair green. I believe witch hazel (ha!) was the eventual cure. I loved it so much I wore it two years in a row, but the second year I covered my hair with sheer and opaque striped white fabric like a nemes. 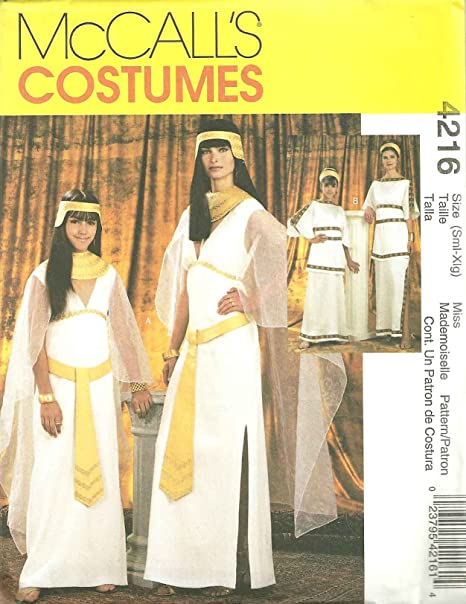 I don’t remember having a favorite, but there’s a picture of me as a kid, dressed as Frankenstein, one of those Collegeville costumes from the '60s.

I also have a faint memory of being Batman '66, I liked the TV series (looks like there was one from Ben Cooper for that)

But anything else I dressed as when I was a kid, has been long forgotten.

My grandfather made me a robot costume out of wood and cardboard boxes. I loved it so much I wore it all the time after Halloween. There are pictures, but I’m not going to search them out because I don’t know exactly where they are.

Combat Strawberry Shortcake. I laced my combat boots with pink and red laces, did up my helmet like a strawberry patch, and had a pink bubble-gum cigar hanging out of my mouth. My best friend was Combat Rainbow Brite. We made her a ‘rainbow ops’ specialist.

(This may not have been a ‘childhood’ costume, but it was a very long time ago.)

Spiderman - sweated my face off in that thing. Those masks had very little ventilation. 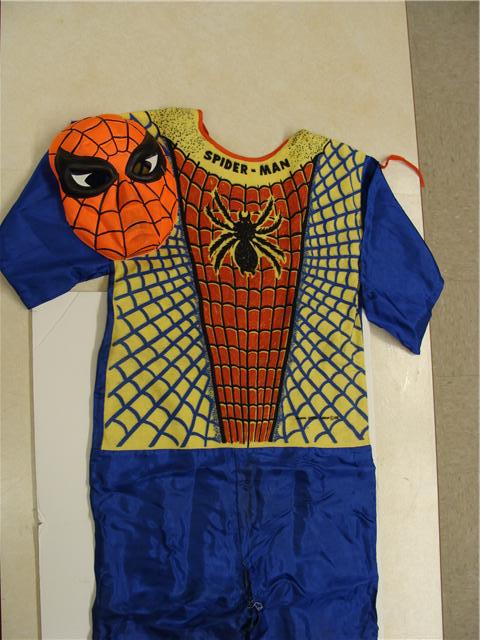 Most of the costumes of my childhood were crap - plastic costumes with plastic masks, but one Halloween a neighbor and I did the ‘sheet with holes in it’ ghost costumes, only I put a plastic top hat on mine and lowered my voice, and NO ONE figured out who I was.

Especially funny since this was a small rural community and I was related to nearly everyone.

My parents (well, mostly my mom) liked doing home made costumes. So I had a few: Spock, Raccoon Mario, Michelangelo from Ninja Turtles (we did a paper maché shell for that one)

But looking back, just because I have yet to know anyone else who did this as a costume, I’d have to say this one: 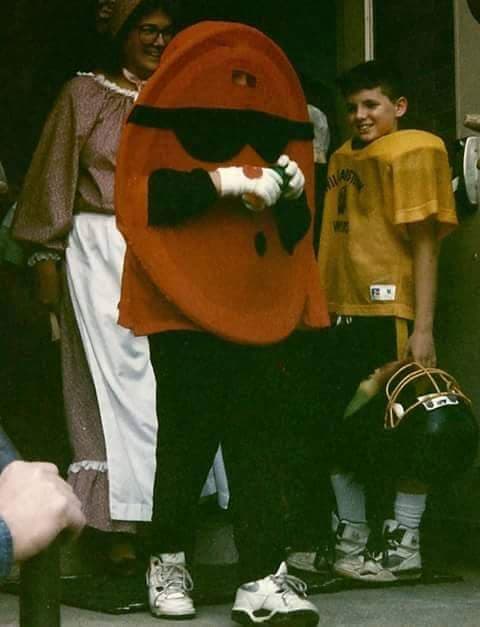 And this was BEFORE the video game came out.

My mom made me a tiger costume out of tiger print flannel.
It was one of those McCalls patterns of course.
It had a tail and even a headpiece with ears on it. I wore the heck out of it!

Even a few years after I outgrew it, I cut the feet off and wore it as a sort of capri jumpsuit. I kinda wish I’d kept the headpiece. I could probably still wear it.

I don’t remember most of my Halloween costumes. I was usually a “ghost” when I was little because it was cheap and easy. When I was old enough to start coming up with my own costumes, I decided to be a ninja one year. Fun, but not too impressive.

I guess my favorite would be the last-minute one I came up with one year. I’d been talking to a friend about costumes and I said I thought it’d be easy to make one with glowing eyes. They didn’t believe me. So I had Mom take me to the Halloween pop-up store. It was late enough that there was only one mask left that covered the entire head: an oversized ogre with scattered tufts of fake hair. I taped red cellophane over the eye holes (I could still see clearly through it, and my eyes adjusted to filter out most of the red) and a pair of penlights on the inside of the mask (one over each ear, basically) pointing to the eye holes. The cellophane caught the light and refracted it just a little. boom Glowing eye mask.

Being from the Detroit area Robocop was a big thing (mainly to kids) and found that cheap plastic/ vinyl costume with the flimsy cheap mask. My mom was pissed but I felt like a million bucks.

Combat Strawberry Shortcake. I laced my combat boots with pink and red laces, did up my helmet like a strawberry patch, and had a pink bubble-gum cigar hanging out of my mouth. My best friend was Combat Rainbow Brite. We made her a ‘rainbow ops’ specialist.

I love that. Well done.

As an adult: In college I was Mr. Clean once. I already looked the part, so that was easy and subtle and led to some fun. 20 years later, I recreated it. I’ll let you figure out which is which. 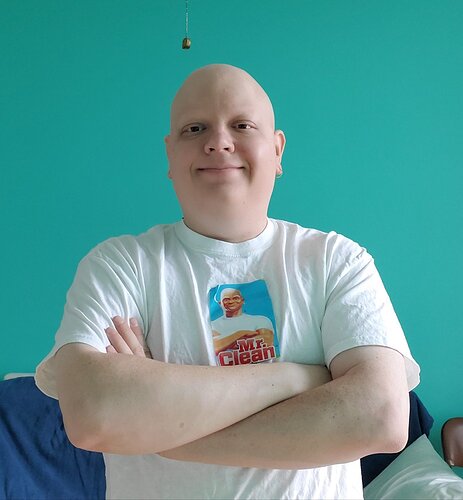 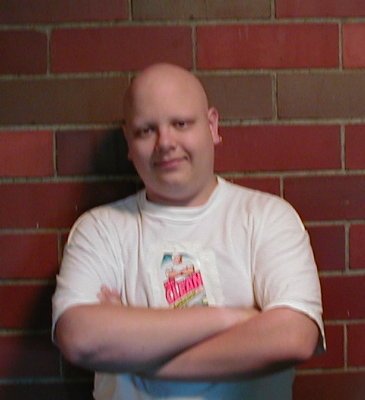 To take my nieces and nephews around, I did Clark Kent. I already had a Daily Planet t-shirt, so I made a nametag and put on my Superman logo belt buckle.

This one wasn’t for Halloween. It was just a regular summer family beach BBQ. 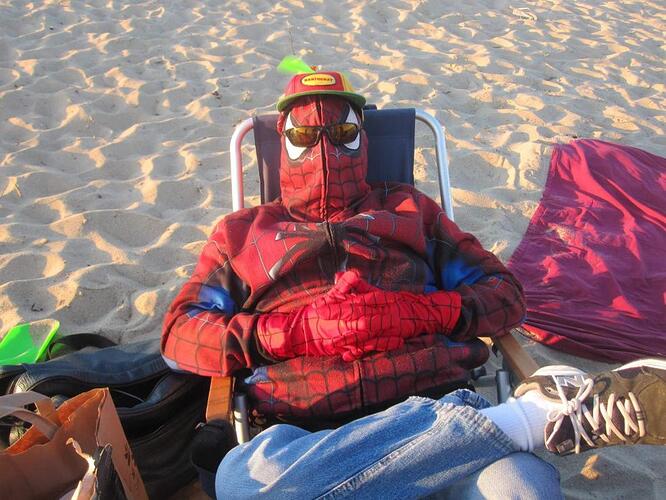 Aw man, Halloween. One of my favorite holidays. I’m gonna go ahead and say a “childhood costume” would be before age 13, since I’ve been dressing up for Halloween all my life.

(Without that limit, though, I’d say my favorite costume was my satyr/faun costume at age 14 [I think…]. I had the physical appearance of a faun, complete with pointy ears, horns, furry goat legs sewn together by my mom, and hooves over my shoes, but I channeled the worship of Dionysus with a clear tumbler full of fruit juice and a t shirt that said I was born to be wild.)

My favorite costume would probably have to be Garfield. It was actually my older sister’s, and it had been hand-sewn by my mom and a relative who, sadly, is no longer with us. It was lumpy and off color, but it was ours, and I loved it. I also stood out, since not many of my peers shared my love of Garfield. I was a unique fat furry creature that All Hallow’s Eve, and I cherish the memory. I was six years old, less than two months from turning seven.

Sadly don’t have a picture but my last name is Robak so I became Stefan Robot at age 6. A box and lots of tin foil.

More recently I dressed as Nanny from Muppet Babies because I became a for-real nanny.