Continuing the discussion from Great Scenes in Cinema:

To narrow down that topic just a bit, what are your favorite individual moments in movies? Single moments that intrigue you, move you, make you laugh or cry, make you go weak in the knees? It could be the moment Vincent Vega opens the briefcase in Pulp Fiction or maybe it’s when Bob whispers something to Charlotte at the end of Lost in Translation. Maybe it’s something obvious or maybe it happens in the background.

Here’s one that has always made me laugh: Ricky losing his balloon as he runs to tell Monique she shouldn’t have left the dance in Better Off Dead. The realization, the half-hearted little jump, quickly giving up … slayed me every time.

I can’t really expound on it here without ruining the magic of the moment, but it’s the last thing we see before we go to the end credits of Magnolia.

There’s something that happens onscreen that synchronizes with a guitar lick from the Aimee Mann song “Save Me”, and the effect never fails to knock my socks off.

I had no idea how Paul Thomas Anderson was going to wrap up a mammoth film like that, but damn, folks, he chose the best possible way. It’s very simple but very euphoric. Brief but powerful. Concise but cathartic, especially after everything that the character in question went through.

when Bob whispers something to Charlotte at the end of Lost in Translation.

You called mine. Just a beautiful scene, it’s intimate though they are surrounded by people. It leaves a lump in my throat.

I wanted to focus on a scene in Sing Street or Once (by the same director), but I kept coming up with one after the other, so that’s just the whole movie at that point.

I’ll try and think of others.

So many. Someone already mentioned here the great set-piece/heist in Jules Dassin’s Rififi, but a similar moment occurs in Melville’s The Red Circle: it features the redemption of Yves Montand’s character by making the (rifle) shot of his lifetime in order to defeat a lock at a jeweler’s.

The jump cut from the bone in the air to the spacecraft, in 2001: A Space Odyssey – drawing a direct line between the invention of tools to humanity going into space. A million years of evolution and advancement compressed between two frames of film. Just… wow.

You called mine. Just a beautiful scene, it’s intimate though they are surrounded by people. It leaves a lump in my throat

I’m 100% with you here, this movie is a huge, huge favorite of mine. It almost feels like sacrilege to try and figure out why. I’ve never seen anything else quite like it. That last scene in particular – I’ve heard that Bob’s whispered words are known somewhere, maybe in subtitles, but I’ve never sought them out. Far better, I think, that they stay a mystery.

Yeah that’s one where I don’t want to know, it’s meaningful the way it is, leave it alone. (and don’t nobody spoil it by telling me)

On the other side of that coin, Once - I was okay in discovering later what girl said to guy, when he asked her if she still loved her husband (from whom she was separated) and she answers him in her native tongue. He doesn’t understand what she’s said (nor did I), and in the theater, I was fine with that. But on later viewings, knowing the translation, what she said, was okay. It added a new layer to the scene.

BTW, if you’re curious, she tells him “It’s you that I love”

For whatever reason the first thing that jumped to mind was the ‘trying out guns’ montage in Bottle Rocket. Specifically the part in the quick intercutting edits between each of the characters in profile where Bob comes up. His expression and the fact he is holding a noticeably smaller gun just cracks me up, while also being a cool bit of characterisation. 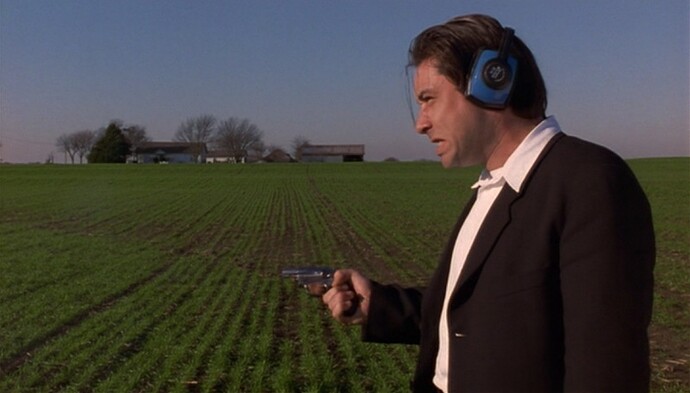 No matter how stressed out I get, this always makes me smile.

I just watched the 1956 version of the King and I. So it’s sticking out to me the most.

Lots of fantastic scenes that stink out to me. But the scene where the king is asking to be taught how to dance like the British do, is one of the most fantastic scenes, then it’s immediately followed by his character arch.

My favorite Coen brothers movie. You know … for kids.

Man, nothing makes me feel more boomer than when I find one of these old threads clearly in my wheelhouse, and it came and went two months ago without me seeing it. Although, looking at the date, I was recovering from a hell of a weekend.

Someone already mentioned here the great set-piece/heist in Jules Dassin’s Rififi , but a similar moment occurs in Melville’s The Red Circle :

I had just seen that in the theater! That’s a good moment. Caught Rififi on the 60th anniversary and loved it.

And since people were talking musicals, there’s the moment in The Music Man when Shirley Jones realizes she’s in love with Robert Preston…

I love everything about The Music Man. Even little Opie Cunningham’s lithp.

I’ll try and think of others.

Well, now that you bring it up!

“You’re a very nosy fellow, kitty cat . Huh? You know what happens to nosy fellows? Huh? No? Wanna guess? Huh? No? Okay. They lose their noses. Next time you lose the whole thing. Cut it off and feed it to my goldfish.”

Actually too many from C-Town to type them up here.

BUT speaking of that, in the sequel, I’m a sucker for the scene when J.J. takes Madeleine Stowe over his shoulder, exposing her clothed derrière. SFW but also kind of spicy.

Doing a Kubrick binge: I love seeing a Howard Johnson’s on the space station. Interesting that the movie screens on the back of their flight seats are way bigger than ours!

Saw this on the Sunday of it’s opening weekend and the crowd went nuts. RIP PSH and Mike Nichols.