2022 may be coming to a close, but the Gizmoplex is still open for business, even on snow days and not-so-much-snow days, thanks to Winter / Wonderlands Month!

Our seasonal (and not-so-seasonal) roundup takes us through a variety of countries and climates, serving up laughs of all sizes, varieties, and temperatures.

In the December Vault Picks, these movies may demonstrate noticeable budgetary issues, but they will still spare no expense in transporting us to such narratives as:

These hilarious episodes may give the cold shoulder to boredom regardless of whether or not they involve a thermometer descending to chilly lows, but only ONE installment can rise to the top based on your votes. Which whimsically wild wonderland wins without wavering? Which sensationally spectacular story stomps such strong selections? Whose cuisine will reign supreme?!

Whoa, Avalanche! I wonder if this means The Christmas That Almost Wasn’t could be one of the three events later this month?

Whoa, Avalanche!! I wonder if this means The Christmas That Almost Wasn’t could be one of the three events later this month? 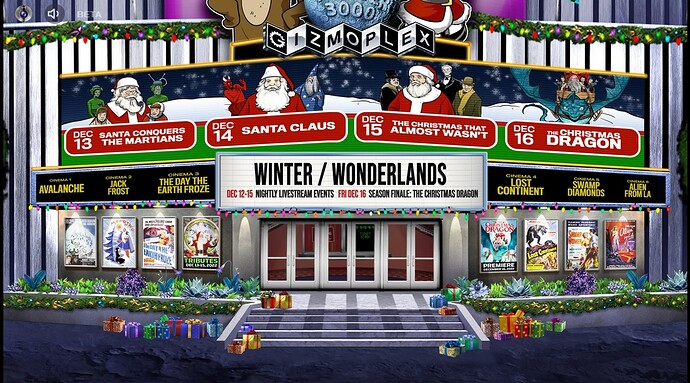 It sure does! There will be a four-night festival of Christmas episodes at the Gizmoplex starting on Tuesday, December 13th, and The Christmas That Almost Wasn’t will be part of the fun!

There will be a FIVE-DAY festival, actually! 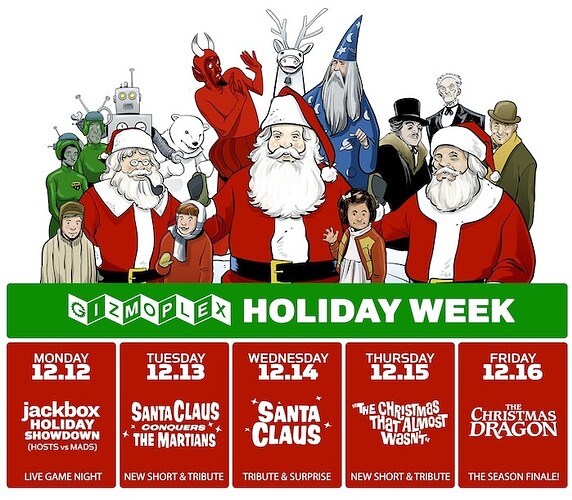 In addition to the four MST3K Christmas episodes from December 13th to December 16th, it turns out that Monday, December 12th will feature a Jackbox Holiday Showdown: Hosts vs. Mads!

Hey, first vote. That’s never happened before. This is easy… Jack Frost is my all-time favorite episode, so I voted for Swamp Diamonds.

I have to say that I really like the winter side of these picks, not a big fan of the wonderlands.

Now I’m curious if this is a one-time thing, or if Netflix stuff can now be in the mix for Synthia Selects on a regular basis?

From the Mike Nesmith riff to the exploding ambulance, I love this dumb movie forever and ever amen.

(Though a close runner up to Lost Continent, in which the ongoing climbing scene may be my favorite 5min stretch of riffing EVER.)

Gotta go with Avalanche this time. It gets better every time I see it.

Avalanche as a vault pick and The Christmas That Almost Wasn’t as an event. Great to finally see some Jonah episodes! I was beginning to wonder if there was some previous Netflix agreement that would prevent this from happening.

Now I’m curious if this is a one-time thing, or if Netflix stuff can now be in the mix for Synthia Selects on a regular basis?

I was beginning to wonder if there was some previous Netflix agreement that would prevent this from happening.

I was operating under the assumption that Netflix had some kind of exclusivity deal in place along those lines, too.

Not sure if this is a one-off or a sign of things to come.

They have been able to show a few Netflix episodes during past Turkey Day marathons, so maybe it’s a special agreement like that, or maybe the exclusivity is loosened more (which would be nice).

Walking in my winter underwear…

#1: The Day the Earth Froze. 9/10. Best of the Russo-Finn fantasy epics. There’s so much great riffing in this episode and the host segments are top notch. Always worth a watch and never a bad time. Top 10 MST episode of all time.

#2: Jack Frost. 8/10. Also a pretty good episode but coming in just a bit behind the OG Russo-Finn MST. This one is definitely more cartooish, silly, and a bit childish but it has a fun charm to it.

#3: Swamp Diamonds. 6.5/10. The film quality of the print on this one is awful to look at but a fun episode with good riffs. The main issue is the repetitiveness and the sheer dullness of the movie. It’s like watching Prozac. There’s great riffing though and it is a solid - though unremarkable - outing.

#4: Lost Continent. 6/10. Rock climbing. This was a movie that is one of those “show that MST can make a silk purse out of a sow’s ear”. 20% introduction. 60% chumps walking around in front of a camera. 20% dinosaurs and denouement.

#5: Avalanche. 6/10. A paint by the numbers disaster movie with cookie cutter characters and script but an absurd premise. A solid episode with good riffing.

#6: Alien from LA. 4/10. A terrible movie and a rather uninspired episode. Whiny voiced protagonist stumbling haplessly in hollow earth nonsense story grates on the nerves.

As I often say to Santa lookalikes, “Bring on my fiance! And my dowry!”

It’s gotta be Jack Frost for me. After all, when the first plot point involves knitting socks, you know you’re in for one sweet, sweet ride.

It’s a tight race. I adore Avalanche and Alien from LA both for the particular brand of cheese they bring to the table, But Jack Frost is usually in my ever-shifting Top 5. The movie is pleasant. All the humor comes from the goofiness of it all. The riffing is top-notch.

From the Mike Nesmith riff to the exploding ambulance,

Any presence of a Nez-related riff makes me add 0.5 to an episode’s score.
It miiight erroneously stack Avalanche higher than some of my other S11 faves, but who cares, it Nez. 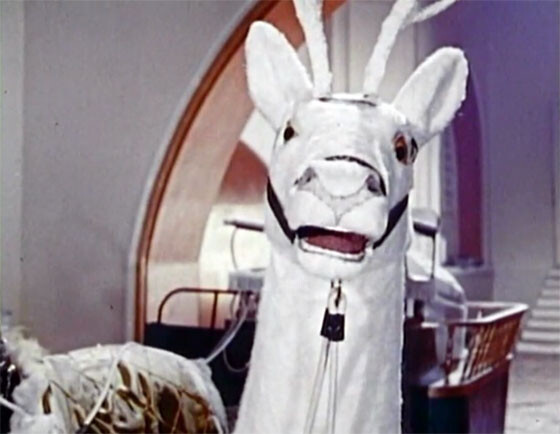 cough
Sorry, I think the Christmas Spirit was taking hold of me, blasted thing. Possess someone else!

It’s a good thing no one’s made an off-topic Monkees thread here yet, I totally wouldn’t submerge it in fan posts first thing.
(HEAD is my favorite movie.)

I was a Monkees fan growing up (the second time around), and then I was a Davy Girl, but in my old age and wisdom, I am now a Nez Head. I may even own a couple green wool hats and several different copies of First National Band stuff.

And when I saw Micky, Peter, and Nez together in 2012, they played almost the entire Head soundtrack and it was WILD!

“The Scandahoovian Sketch, Ladies and Gentlemen.”

I’ll probably go in reverse order and watch this one last.