Under rated- No one seems to remember Michael Keaton in Gung ho. Pretty darn fun movie, and even had Shredder from TMNT in it. he wound up sweeping floors at the end :).

I won’t go as far as to say “forgotten” but I feel like Stephen Spielberg’s Tintin movie didn’t get enough love. It’s got a crackerjack script from Edgar Wright, Joe Cornish and Stephen Moffat and the animation style, similar to the creepy uncanny valley style of Robert Zemekis films, work better here due to an interesting mix of realism and cartoonish exaggeration.

Plus Andy Serkis is a perfect Captain Haddock.

I finally watched Shock Treatment, the sequel to Rocky Horror Picture Show, and to my immense surprise from hearing nothing but revulsion towards it my whole life I found it to be FANTASTIC. Did it make sense? Heck no. Is it a movie for most people, let alone everyone? Of course not. But I was enraptured with it beginning to end, loved the music, loved the look, loved the whole conceit and the prescient nature of every single allegory it was throwing at the wall, and had such a blast that I instantly started it over and watched it again.

Society lied to me. It LIED!

All the Keaton/Howard movies are underrated. I saw Gung Ho in my senior year econ class truth be told. I even saw Spaced Invaders in theaters as a kid.

The Sender (1982) - Tarantino’s favorite horror movie of that year.
I Love You to Death (1990) - My favorite non Oscar winning Kevin Kline role and a rare against type non serious performance for William Hurt.

The Josie and the Pussycats movie deserved way better box office than it got. I did a rewatch a while back, and it still holds up. Music is great, too.

Serial Mom is perhaps my favorite John Waters movie. Kathleen Turner is hysterical in the title role. I need to do a rewatch of this at some point.

Down With Love is another movie that deserved better box office. Renee Zellweger and Ewan Macgregor are excellent in this pastiche of the Doris Day/Rock Hudson romcoms of the '60s.

One movie my brother and I watched a lot on cable as kids was Big Business, which featured Bette Midler and Lily Tomlin playing two sets of twins. I didn’t find out until watching an episode of Jeopardy many years later that the movie was loosely based on Shakespeare’s The Comedy of Errors. Another movie to rewatch.

I was really surprised to see that’s on Disney Plus. I hadn’t even thought about that movie in years.

Near Dark is an almost unknown vampire movie starring Hudson, Vaszuez, and Bishop from Aliens. It is a pretty damned good vampire movie (clever, fun, sexy, just a touch original), but try getting it on DVD (sometimes you can find it on ebay, I got two copies that way). I’m a bit of a connoisseur of 70s-2000s vampire movies, and it is one of my favorites.

The Josie and the Pussycats movie

For that matter, the Scooby Doo live-action movie was really quite good. I don’t think it was taken very seriously, but as an homage to the classic cartoon it works, and as a movie it works too. And the cameo twist at the end is one of the most fun reveals in any movie.

I was really surprised to see that’s on Disney Plus. I hadn’t even thought about that movie in years.

I did not know this! I am totally going to show my husband this movie soon, since I doubt he’s seen it.

I know it’s getting more love lately (including here) but if you missed it, track down The Wrong Guy, a Hitchcock/fugitive parody that was intended to be a star vehicle for Dave Foley. It’s great; the premise is Foley thinks he’s been framed for a crime he did not commit. In fact, the police already have evidence that he’s guilty and are completely ignoring him while he’s desperately hiding from cops and making needless escapes. 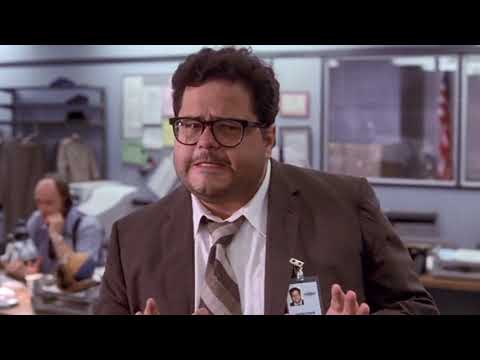 I love The Wrong Guy! I had the DVD at one point, but I must have misplaced it during one of my moves in my 20s. I will need to order a Blu-ray so I can watch it again.