I know there are some game show lovers on the forum. There seem to be more and more reboots of old game shows. What are your thoughts on them?

I’ll start with the new reboot of Lingo.
They’re obviously trying to capitalize on Wordle in that they’ve removed the Bingo element of the game, so it’s a steady stream of guessing words.
I find it a little more monotonous than the old show, but they’re varying things a bit by giving clues for some words, and RuPaul is always a hoot.
At least it moves quickly, compared to the snail’s pace of many recent shows.

What do you think?

I personally have to give thumbs down on the new Lingo because it’s way too confusing and complicated than it’s supposed to be, especially with a format that’s known to be easy to understand. There also should have been a bonus round at the end instead of a guaranteed $50,000 bonus.

This goes to show that ABC is still King in terms of present day revivals (Press Your Luck, $100,000 Pyramid, The Chase), and special versions of present shows (Celebrity Family Feud and Celebrity Jeopardy!).

This goes to show that ABC is still King in terms of present day revivals (Press Your Luck, $100,000 Pyramid, The Chase), and special versions of present shows (Celebrity Family Feud and Celebrity Jeopardy!).

Game shows, like “reality” or talent competitions, are cheap to produce. That’s why you are seeing so many in the last couple of years in prime time as opposed to daytime.

We’ve been watching Lingo, mostly for Rue, but also we like word games, and don’t play Wordle.

My wife is a game show junkie, so we watch most of them…and old reruns of other game shows.

She hates watching Jeopardy with me, because I can usually read and then answer the question before the host finishes asking it…I took the test to go on the show, but did not do well enough, though.

One we’ve been catching lately, is Impossible, it’s a British game show, so some of the answers I have no idea about.

I do know about that and it’s great.

One we’ve been catching lately, is Impossible, it’s a British game show, so some of the answers I have no idea about.

Impossible and Pointless are the best of the British crop right now that hasn’t seen a stateside launch. I do think that either version of the US Chase never got nearly as good as the original daily UK version.

I’m not a big fan of the new Press Your Luck. The main game is fine, but the entire second half of the show is that end game and it drops to a snail’s pace. I would have found a way to make the main game take the full hour, or maybe have a short end game.

I really enjoyed the last run of the Gong Show. I grew up watching reruns of the original and I thought this was a great revival. I didn’t miss an episode.

And there was something so Kaufman-esque about that host! 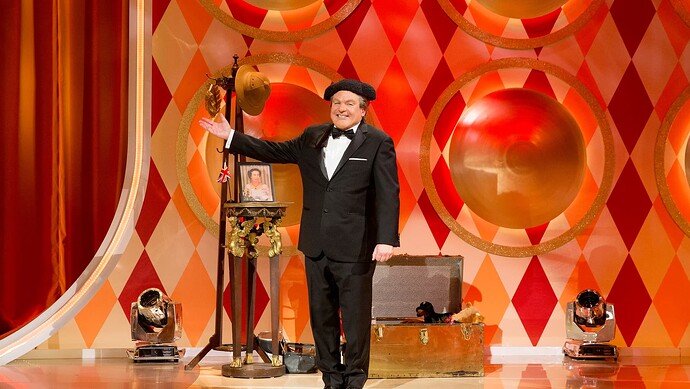 We enjoy the reboot of Supermarket Sweep more than expected. Leslie Jones is a HOOT.

Yeah, Leslie’s awesome, if you haven’t caught her Daily Show yet, you should, her intros have me laughing !