Star Wars. You know it. You love it. Let’s talk about it!

Here is your general purpose thread to talk all things Star Wars, movies, television shows, comic books, novels, games. We’ll even allow discussion of the Holiday Special if you give a warning first!

Everything is fair game, just remember everyone is a fan of some aspect of the franchise, so let’s keep the discussion a light-hearted celebration.

The original trilogy is on my list of will double/triple/quadruple dip any time the format changes.

I had these films on VHS, laserdisc thank you very much, DVD, BluRay, and now streaming.

I loved the Timothy Zahn trilogy of books with Admiral Thrawn and I think read them to the covers falling off at least once (and these were hardbacks!). I think I still have a copy of Splinter of the Mind’s Eye kicking around the house somewhere. 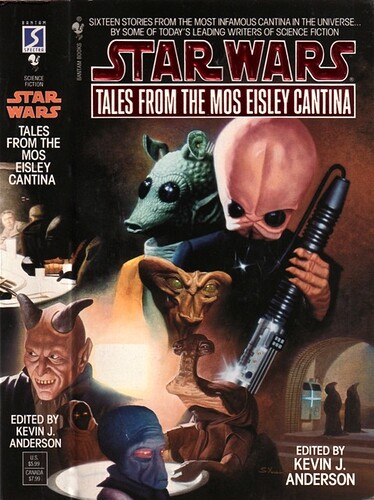 … but I was always keen on Tales from the Mos Eisley Cantina.

The concluding tale, “One Last Night in the Mos Eisley Cantina: The Tale of the Wolfman and the Lamproid”, was… surprisingly poignant? I genuinely wasn’t prepared for where it was going, but I liked how it brought that collection of stories to an end.

You know it. You love it. Let’s talk about it!

I sense something… Something I haven’t felt since…

What also seemed interesting at the time were all the Shadows of the Empire things, the stuff that tried to fill in the blanks between The Empire Strikes Back and Return of the Jedi.

The comic adaptation was fun, as was the novel… 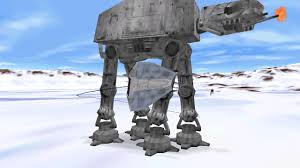 … but I adored the Nintendo 64 game. They led with their best foot by having you take down AT-ATs right from the get-go, the speeder bike level was terrific (even if the game didn’t completely sell you on the idea of Luke being unable to take on a random bunch of gangsters), and the final space battle against the Skyhook Station was the raddest stuff ever.

Trying to beat the Gladiator Droid in the next-to-last level, though… gawd, the stuff of nightmares.

The X-Wing and TIE Fighter PC games were a blast.

My husband played those. He also really enjoyed the Old Republic games.

This is the only Star Wars game I care about.

I’m damn good at it too.

This is the only Star Wars game I care about.

I was absolutely down with the Super Nintendo Return of the Jedi game until the nigh-impossible/unplayable final level where you have to pilot the Millennium Falcon through an exploding Death Star.

The game put you in this first-person perspective, and if you didn’t know which way to turn the ship (spoiler alert: you didn’t), you’d keep taking damage and wouldn’t make it out.

The rest of the game, I’m happy to say, was dope as hell. That whole SNES series was, but Jedi was particularly fun. Very challenging, though. You had to come ready to play. 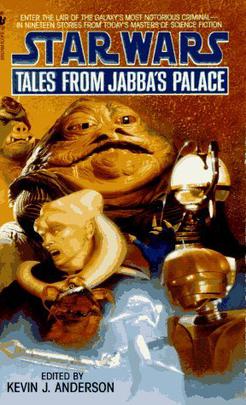 I had that and loved the HELL out of that.

Regrettably, I never tried Tales of the Bounty Hunters. I’m-a have to change that.

When I was in short trousers we had a version of A New Hope taped off the telly, maybe Xmas ‘83? Definitely the first time it was released for broadcast in the UK.

I watched that version so much that, even today, I know exactly where all the ad break edits were.

I was directly in the psychic firing line of the OG trilogy, so never loved anything else from the franchise as much. But those first three had a big impact for sure.

Heh, the funny thing is, I discovered Spaceballs long before I discovered Star Wars, and when I finally found it, I was all, “Wait… this is like Spaceballs, but it’s not as funny.”

But I dig the series across the board.

How I found Star Wars? One of those trilogy marathons they had for the holidays at USA Network. And sometimes, they’d get the onscreen talent to host those, like I remember Billy Dee Williams hosting the movies one year.

Loved the hell out of that. I still have the original cut of those movies on VHS. Regrettably, they’re all in Fullscreen because those tapes came from a time when they’d push Pan-and-Scan tapes on you long before they’d even try to sell you Widescreen cuts. Education about film was so terrible back then that people were all “WHY BUY THOSE MOVIES WHEN THEY PUT THOSE BLACK BARS ON THE TOP AND BOTTOM OF THE SCREEN YOU’RE LOSING SO MUCH OF THE PICTURE” and such.

How many of us saw any of the original trilogy in the theaters? I was too young for the first two, but I remember going to see Return of the Jedi when I was probably 7 years old. Just me and a friend, no adults.

The 80s was a different time.

How many of us saw any of the original trilogy in the theaters? I was too young for the first two, but I remember going to see Return of the Jedi when I was probably 7 years old. Just me and a friend, no adults.

The 80s was a different time

Oh, man, I wish. I would’ve been too young to have gone to the movies by the time Return of the Jedi came out. Like, still crawling around the planet young.

But I was down for the special edition releases in the late 90s. That was… an experience. A really good one, too.

I was living in Alaska when the first movie came out. No movie theaters on Air Force bases in the middle of nowhere.

Byt the time Empire came out, we’d been transferred back to the lower 48, but I never saw that one in a theater either. It was all over the place on cable though (Empire and Dark Crystal, I think were some of the first movies HBO (or maybe Showtime) aired when cable TV became “the thing”, and it ran them constantly) We didn’t have cable either, but friends did.

Return of the Jedi I did see in a theater, with my dad as my mom and sister weren’t interested. Loved it.

I was born in the summer of 1977. Right when Star Wars came out. As a result, my mother didn’t see it in the theater- or anywhere else. She proudly tells people she’s never seen Star Wars and it’s my fault.

Funny, we were just talking about this last night. I saw the original trilogy in the theater, followed (at least in the first case) by a trip to Burger Chef for a mushroom Swiss burger and a SW commemorative glass.

I have vague memories of being 2 or 3 and watching Star Wars in the back seat of the car in a Drive-In. Jedi was my first “Take me to see this!” movie ever.