We just got this backer update about the first-ever Gizmoplex Black Friday sale! 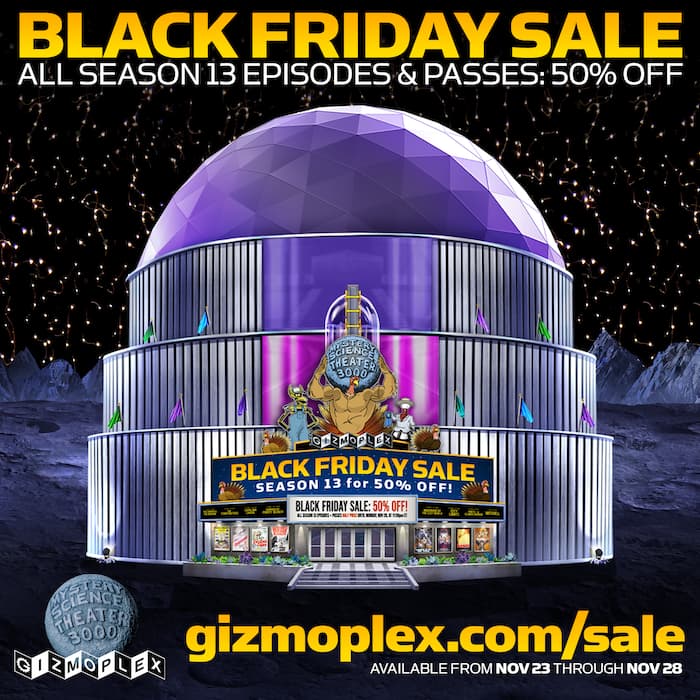 The deal for the season pass sounds GREAT!

However, it has me thinking, do I need a season pass for 2023? Is anything new coming to the Gizmoplex next year? Is a season 14 coming?

2022 has been one of the greatest years in MST3K history, but I don’t think we’ve heard anything about plans for 2023?

Most of us are hoping for a S14 announcement during Turkey Day.

Yeah that’s what I’m hoping too.

However, it has me thinking, do I need a season pass for 2023? Is anything new coming to the Gizmoplex next year? Is a season 14 coming?

If you had the season 13 season pass, you’re already good. If you don’t, this would give you everything that has come out this year and through February of next year. As a season pass holder, I can tell you it’s well worth it and $75 is a bargain for what you’re getting.

As for Season 14, while there’s been no announcements of anything yet, I just figure that they didn’t build the Gizmoplex just to have only one season. So stay tuned.

Welcome to the boards!

I don’t want to be a party pooper BUT we won’t be announcing anything momentous during the Turkey Day marathon. Just don’t want y’all to get your hopes up!

After this year’s marathon, we have the VIP finale backer event on Dec 3, and then we’re serving up a WHOLE WEEK of nightly holiday livestream events from Dec 12-16, plus we have livestream events through January and February of next year. So we’ve got a lot on our plates for the next bit.

The future is on all our minds as much as it is yours, however! We’re just focused on finishing up the year of Gizmoplex content that we promised first.

Any chance of classic episodes also being on sale? I would probably pick up quite a few if they were also 50% off.

So March first is when we get news,
Sorry, we’re still going all Veruca Salt about this. Maybe you can buy Rifftrax while it’s not looking.

I don’t want to be a party pooper BUT…

just for the current season. Would be better if they included the post-movie shows, especially for the Dr. Mordrid show.

well, come on, you have to assure us Kabahl is sticking around…as Kinga’s boss.
And we’re still scarred from Netflix

Would be better if they included the post-movie shows, especially for the Dr. Mordrid show.

Buying the Season Pass gives you access to all the livestream premieres, including the aftershows!

But how do we get access to the preshows? You know, when Matt is assured his microphone is working and everyone else stifles their giggling.

My presumption has always been that a Gizmoplex pass would give full access to everything in the Gizmoplex for a 12-month period. All this talk about “Season 13 passes” or “Season 14 passes” makes it sound as though a person would have to subscribe to Season 13 AGAIN in 2023, while also subscribing to a hypothetical Season 14. I.E. It sounds like they would be expecting people to pay for a subscription every year for every separate season if they wanted to view it.

Please tell me that is NOT the case and that the “season pass” for the year would always include ALL previous season content (like any normal subscription service would).

I suspect the answer, or at least part of the answer, to that is predicated on what happens after season 13. However, the fact that all of the Comedy Central and Sci-Fi episodes are available, does seem to say that a pass would give you access to all previous content.

That’s the industry standard, so I would hope that’s the case.

A season 13 pass gets you permanent streaming access to all season 13 content and livestream event replays, plus DRM-free downloads of all 13 new episodes and 13 new shorts. Basically you’ve bought season 13, so you retain access to it regardless of whether you sign on for season 14. Does this clarify?

That means I can watch The Bubble any time I want, forever!