Ok. Up, had coffee, and ready to finish what I started.

So my big question. Who actually stayed through the WHOLE thing? I had to tap out 'bough halfway through Parts. So yes, that means I now need to watch a Sugicly Enhanced Jo-Don Baker movie.

Hope you crazy kids enjoyed your late-night fun. Or not if in a time zone where it was not that late and you just had to get up EXTRA early.

You lasted longer than I did, I had to go just before Clonus started…Nothing like a Turkey Day Hangover…

Watching Sword and the Dragon now. Catching up on the bits I missed. I had to go to bed not long after Mitchell started.

Had to call it a night once Parts: The Clonus Horror finished.

Yeah, that one wears you down.

Anybody still recovering from last night?

I tried really hard not to fall asleep during Mitchell, but couldn’t make it. I do not have the day off. Still worth it.

What temporarily caught me off guard is the fact the Gizmoplex stream continued after Sleep for Health ended. I woke up thinking that there were surprise episodes added. But once my eyes adjusted, I could tell they were not Surgically Enhanced.

Add me as one of the many who’d be interested in having the MST3K Twitch/YouTube/Pluto/Shout TV stream be a part of the Gizmoplex! One of my favorite things about the old WWE Network was that it had a constant live feed that played older events throughout the day (bookended by live or timely studio programming). It made me discover stuff I wasn’t familiar with or didn’t even know existed (since they have way too many hours of content on there). Having this alternative available would be pretty cool, even though it’s readily available on other providers.

So my big question. Who actually stayed through the WHOLE thing?

Well, it didn’t start until lunch time for me. I finally called it quits after Beyond Atlantis (no way I could miss that!) around midnight. Some of the episodes after that are ones I’ve seen fairly recently, so I don’t feel like I really missed out, apart from the chat here.

Yeah, off to work today as well. Saw the first thirty minutes of Mitchell.

So can I assume that no mention of a Season 14 was made?

I didn’t wake-up until midway through The Starfighers. I was up late the night before playing The Evil Dead: The Game because I enojoy sleep deprivation.

You know. It just occurred to me that Johnny Mathis is a terrible thief. Most crooks are paranoid about being caught. But he is more interested in looking around than hearing a car driving up, and a party of people entering the house. And when someone shouts at him while robbing, he stops to turn and look.

He shoudda stuck to singing.

Re-animating a Thanksgiving special of Beyond Atlantis a la The Peanuts specials, specifically A Charlie Brown Thanksgiving, where Mother Crabber will be sung to the tune of Little Birdy. You’re welcome.

Thinking once again about the Mothercrabber Rap as a result of the Turkey Day Marathon, I’ve come to realize it’s still better than when middle aged showrunners try to insert rap songs into kids cartoons,

So my big question. Who actually stayed through the WHOLE thing? I had to tap out 'bough halfway through Parts. So yes, that means I now need to watch a Sugicly Enhanced Jo-Don Baker movie.

I made it*, had an alarm set for 5:50am CST. Watched the first hour or so in bed… Got up, got some stuff done in the kitchen for dinner, then made breakfast.

(I probably have an unfair advantage, having stayed awake for 24hr races like Daytona - both watching on TV and in person… I’ve learned how to pace myself for this sort of thing…)

By the end… I was kind of dragging… But, the Turcules ending… well, when you get that much coffee running through your sinuses at 2am, you’re good for another hour or so! So, watched the stream for a bit after that before calling it a night and getting the cat upstairs.

Need to rewatch a few host segments that were talked over, couldn’t quite hear over running water or mixers, or that I missed by not getting back from the bathroom fast enough.

Congrats to you on making it.

12 hours later and I finally finished. Ahh, Turkules. My your existence and suffering never end.

Funny thing. I have watched Mitchell many times over the years. And it occurs to me. Mitchell’s not a very good cop.

Then again, I think Cummins might be the only halfway competent person in the movie.

But thanks for the high-def’s Gizmopeople. It especially increased my appreciation for Trace’s physical comedy skills.

Also catching up. Left right after the Sword and the Dragon, came back near the end of Santo. Just finished Starfighters so only Catalina Caper and Horror of Party Beach to go. 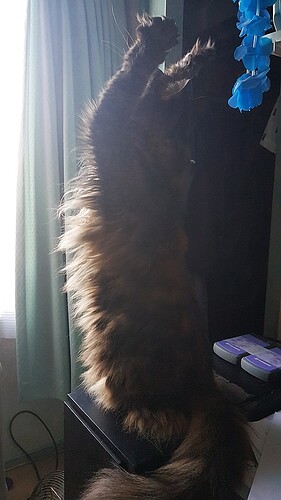