Gypsy and Crow are both kind of horrifying in the KTMA days.

Crow has a distinctly Marty Feldman-esque quality in the KTMA episodes.

I couldn’t get past how she sounded.

Well, in this particualr episode, Crow is voiced by Josh. So, there’s that.

In no particular order: Which bright spark built the submarine HQ 8 miles inland? I loved the bongos alarm. I liked the sparsity of the comments, but I did like Stingray as a child so was kind of interested to just see this film, I think in a different film I’d be crying out for witticisms. I liked the music, but again this might be a fondness for the show as a kid. I liked Joel eating snacks and the bots dropping in and out for errands and updating Joel about the state of things outside the theatre and him answering questions about anything missed. Including fish in the under water scene was a nice touch of detail. The third under sea villain had a head that looked a lot like Kryten from Red Dwarf’s head.

“I’ll go around you go through”

Title of your sex tape

Every time we see the title card, I want Angela Lansbury singing, 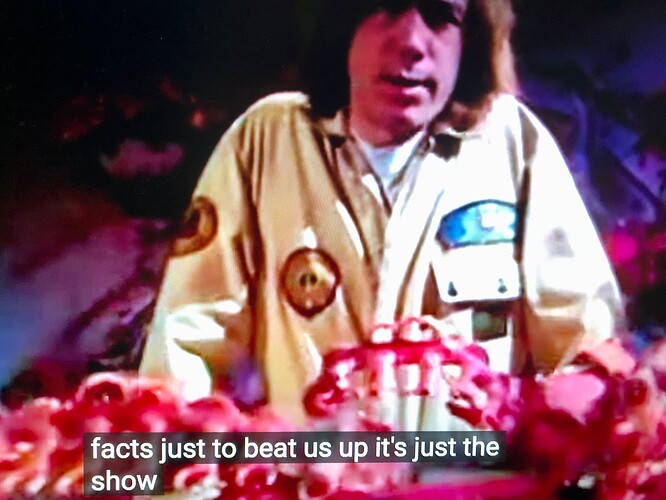 Gypsy and Crow are both kind of horrifying in the KTMA days.

Kinda’ fascinated by her skeletal appearance. It’s easy to picture her future state (the one we’re most accustomed to) being built right over these “bones,” though I know that isn’t technically true.

Also… I like the original S.O.L. design. Reminds me of those giant devices you look through when having an eye exam.

Who is this Joel “Hodgson” and why is he all alone in the theater?

Gotta’ say, as this thing winds on, I’m kind of getting into enjoying the scenery and model work. However, the constant Cold War overtones of, “Everyone’s our enemy so we just get in their space and blow them up no forethought needed and then go have champagne” gets both disturbing and tedious over time. Great lesson for the youth there, Super-Marion.

The latter-day Brains, who were so bleakly hilarious doing the game show in Rocket Attack: U.S.A., could’ve had a field day with this inspiring message.

[ETA- Mr_Potroast reminded me that Team America: World Police was inspired by this show. Makes sense. I’d forgotten all about that movie, to be honest.]

Late to the thread but I just watched this last night. I’ve watched it before but not for a while and it’s one I never remember very well, probably because I was always a Supermarionation fan and I know the Stingray stuff better but also maybe because of the riff sparsity.
I enjoyed it, feels very handmade and intimate. I wonder whether there are so few riffs because they weren’t sure if they could get away with doing them.
I like that there so far to go with developing Crow’s personality and performance. Feels like Joel just built him and has modifications to make.

There are people working on Season 13 who are younger than this episode.

I am now applying this to all aspects of my life

OK, I’m going to say this:
This movie is actually great! It’s cheesy, but artistically well-executed. I’m endlessly impressed! It’s a fun episode, even with only sparse riffing.

Copied from the “What Episodes have you watched recently”, with some additional thoughts

I haven’t watched a KTMA episode in a few years, so this was just really jarring. No one in the theater for the first few minutes of the movie, Joel in the theater alone until after the first host segment. About halfway through and still no appearance from any other bots (outside of the opening credits), Crow repeatedly referring to Joel by full name (and Hodgson, not Robinson).

And I would comment on the pace of the riffing, but using the word “pace” seems out of place. Pretty sure there were more riffs in the 5 minutes of “Make A Meal In 20 Minutes” short we got the other month.

Gypsy’s…barking?, Crow coming and going from the theater multiple times…

Clearly you can see the seeds of what we know and love today, but boy howdy is this primitive MST. I mean, it is the first episode, so that’s to be expected.