Group Rewatch- The Robot vs. the Aztec Mummy! 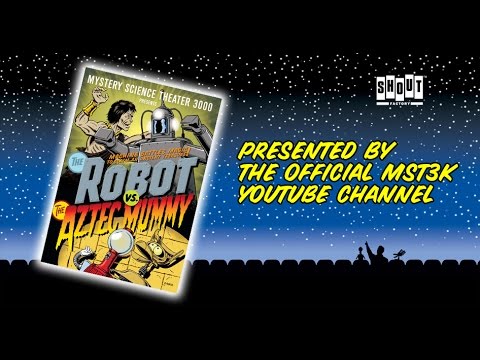 This movie is significant in that it’s about 20 minutes of new movies and the rest of it is simply taken from earlier movies in the series. It was a hard slog, but there were some good riffs in it.

“Every evil scientist has a pit full of rattlers.”

“Once that robot gets into gear, he’s really gonna kick some Aztec.”

Oh, and this is the episode with the demon dogs!

This one is especially notable for them experimenting with artificially interfering with the movie’s soundtrack, as Joel covers a woman’s mouth as she’s singing, and her voice gets muffled. Thankfully, they quickly decided this kind of thing was a bad idea and never did it again.

And also the sound of urination for a shot of when the men’s backs are turned.

Yeah, dubbed-in sound effects and volume gags wouldn’t have worked with this show, I think.

I really like the Mexican episodes, and this one is my favorite. A decent season one episode that is a good late night watch. Cheesy effects and the obligatory mad scientist with the crazed laugh.

This is my second-least favorite episode of the series (after The Castle of Fu Manchu) due to the silent stretches. The thing is, unlike Castle, I still find this enjoyable because it felt like they gave this a serious, earnest attempt.

Plus it’s cool to see them experimenting with stuff in the show, like an episode-long storyline about the devil dogs and even an in-theater invasion long before Timmy would do the same in Fire Maidens from Outer Space.

And honestly, it’s fun to hear Joel obsess about mini golf courses here and there.

I swear, this movie is 99% no robot, 1% slowest moving robot of all time

I love how the dude made a robot that doesn’t handle stairs all that well.

Not just not that well, we actually don’t ever see the robot on the stairs because, as Servo pointed out, the mad scientist designed a robot without knees.

He was mad after all. You can’t really expect a rational evaluation of potential design flaws from someone who styles himself “The Bat”.

I stand firm in my earlier stated belief that the “hero” of this turkey is the second-worst husband and father in human history: superseded only by Mike from Manos.

Some time we are going to have to make a list of the most useless robots of all time. My opinion is that almost all robots before Star Wars were basically useless.

I had never seen this episode before, but I watched it last night. Phew! What a terrible movie!

Interesting note that I found out about this movie is that it was filmed in a similar way as Peter Jackson’s “Lord of the Rings” movies, consecutively with “The Aztec Mummy” and “The Curse of the Aztec Mummy”

Probably much easier to do when most of your movie is flashback. I think only “Angels Revenge” beats it for “extended flashback”.

I actually think I Accuse My Parents might be the most “Flashback” movie. The courtroom sequences aren’t particularly long.

Actually, you’re right. I did forget about that.

And thinking about it, at least from the openining narration, “Overdrawn at the Memory Bank” could be one too.

I read somewhere that this was actually the first episode shown on CC. It would be a good starter episode even if it wasn’t. The riffing is quite good for season one and the movie is actually somewhat watchable. The robot shows up late in this one but the mad scientist is a good one.