House is truly a bizarre work of genius. I think it really captures the nature of a child’s nightmare not by being “scary” but the sense that the rules are out the window and in the cold light of day it all seems so silly but in the moment there is a sense of helplessness and fate even as you fight against it. The director intentionally allows things to look “fake” which gives it an extremely memorable aesthetic. There actually is meaning in there, though I get the impression he was following his message first and foremost but it’s clear from the flashback (where they comment on it like they are watching home movies) that the young people live in a world removed from the horrors of the past.

It’s also the cheeriest horror movie ever made.

As a fan of House, I was thrilled to learn that director Nobuhiko Obayashi kept right on making movies until his death a couple of years ago. His style never settled down either, all of the ones that I’ve seen so far have the same kind of crazy-quilt mix of visual styles and tones. His final film, “Labyrinth of Cinema” (which is literally as bewildering and adventurous as its title suggests, definitely not for casual viewing) is up on MUBI right now: https://mubi.com/films/labyrinth-of-cinema/trailer

Not only that, his 80s movies were extremely influential. He was a director of teen fantasy films in the 80s and one of them, The Girl Who Leapt Through Time, received an anime remake. I can’t find evidence but I get the impression that his work is found in the DNA of another successful teen fantasy director, Makoto Shinkai, who made the anime hit films Your Name and Weathering With You.

Loved this movies for years. Here’s me performing the theme on ukulele (for whatever reason I kept mucking up one of the chords, but at least I mucked up the same one when it came around again, turning a mistake into a decision).

Not pictured: me stepping on stage with a watermelon tied to a rope and hanging it behind the piano, and upon leaving the stage pulling on that same rope now tied to a human head. I explained that to nobody and it was wonderful.

As far as the weirdness of the plot goes… my understanding is that much of it is derived from the director’s young daughter when she was asked what should be in the movie.

Once you look at it as a child telling a story, so much of it begins to make sense (I mean the form makes sense; children tell nonsensical stories of course). All the girls have descriptive names which is the influence of fairy tales (think Snow White’s dwarfs). Some plot elements are introduced and then dropped entirely, and other things come entirely out of left field; that’s totally a little kid getting excited about adding new ideas while making up a story. That’s how I view the movie, and for that reason is it pure and beautiful.

A modern-day use of this technique would be those YouTube videos which consist of someone who has never seen a movie, for example Star Wars, but asked to describe its plot, and then the story they tell gets animated or acted. Those are a little different because you have an anchor (you are familiar with the film they are trying to describe), but the methodology is the same.

I suppose an even more recent iteration, and something closer to Hausu, is feeding scripts into a machine learning algorithm and having it produce a new script, and then filming the result. But even then it can be dismissed as “computers be crazy” which I don’t think you can do as easily with a child.

Hausu is what happens when you give an artist complete creative control, and I for one am here for it.

I remember when this movie first released on Criterion, I must have watched the trailer over 200 or more times on YouTube before finally buying the Blu-ray.

It’s an amazing experience, like if someone played Gone With The Wind, the Jem And The Holograms cartoon, Suspiria and Evil Dead II on the same screen atop one another at the same time.

The sheer amount of optical effects, matte paintings and digital video compositing creates an dreamlike feel that many films haven’t attempted. What’s wild is, some of Obayashi’s other films, like School In The Crosshairs/The Aimed School have very similar vibes. I think Aimed School begins with the same “A MOVIE” title card.

Asei Kobayashi and GODIEGO’s soundtrack is some of the best horror music this side of Goblin. “Eat” is such a bop, pun most definitely intended. “Cherries Were Made For Eating” is also a big favorite. And the “Love Theme” scene at the end never fails to make me cry (it can’t help that I first watched the movie the weekend my grandmother passed away, so I’ll always associate that song with her passing). Kobayashi’s cameo as the dude selling watermelons is seriously one of my favorite parts of the movie. He steals every scene he’s in.

I became an Obayashi fan after this movie and have seen quite a few of his films since. Hanagatami, his final movie (which he describes as the “film he always wanted to make” many years before on the Criterion special features) is AWESOME, and I wish it had a proper Western release. A YouTube channel has compiled a few of his more obscure releases that never made it Stateside.

Speaking of which, I found this blu-ray of five Obayashi films made by an indie video store and released on eBay. It’s a real treasure: 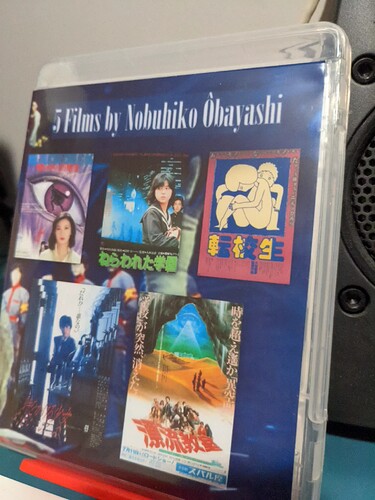 House is fantastic. Visually stunning and a total train wreck. I love it.

I can’t recall what compelled me to watch it the first time, but I swear the scene where a girl is eaten alive by a piano, I had seen bits and pieces of when I was little.

I think overall, it’s the story of a girl who assumes the ‘mature’ position that her mother had, but in the process, her friends must be sacrificed to the house.

I also assume there’s a hidden meaning thing in one bit, where one guy tells another that he likes ‘bananas.’ His friend claims he likes ‘melons,’ but the guy keeps insisting he likes ‘bananas.’ I wondered if maybe this was a way of saying that this guy (whom one of the girls has a crush on), is not interested in girls.

One of the movies that fully owns being made via nightmare logic.

I have to assume Sam Raimi saw this at some point. It’s one of my personal favorites, I love introducing it to people.

I feel it would have been too difficult for Riami to find. That said, there’s an amazing Japanese (loving) knock off called Bloody Muscle Body Builder in Hell. It’s only 63 minutes and is great.

I love House, it’s one of my favourite films. So wild, surreal and cheesy. The soundtrack is absolute fire as well.