In Somebody Else's Not Too Distant Future...

What do you think MST3K would look like in [insert fictional universe here]? What sort of cliches would pop up in the movies? What would the bots be made out of?

It’d be kind of interesting to discern what bad effects would look like, when you can switch to the sports channel and see a spectacular show of fire and lightning in the Pokémon League. And as such the definition of “cheesy” would probably be much different.

The earliest similar concept I know of—and I’m 70% sure there are earlier ones I just don’t know of—is in the Looney Toons where a member of the audience would complain or try to get up to leave (usually only to be quickly dispatched by a cartoon character).

Not exactly apropos but it was the first thing I thought of. A Looney Toon MST3K would look and sound amazing.

Now I want to see a Star Trek MST3K Holodeck program where the bots walk around with you and riff as you make your way through a poorly-written interactive program. Maybe one of those noir Dixon Hill detective dramas Picard enjoyed so much. At least until something goes wrong and the program layers merge and the Dixon Hill characters can hear the riffs and file their objections with hot lead.

Futurama briefly showed us Tom and Crow admonishing the Planet Express crew for talking during the movie. But that world is full of robots of all kinds, most of which have full and distinct personalities. (Although it was never clear why anyone would design and build Hedonismbot, the Robot Mafia, the Robot Devil, Tinny Tim, and so on.) I can totally see MomCorp churning out mass-produced Tom and Crow robots that you can buy and take home to watch TV with you, and there’s no shortage of low-grade TV to riff on, either.

Fugitive Alien. Crow has an inexplicable hatred and disdain for men from Planet Ceasar. The SOL is a decommissioned defense monitoring station in lunar orbit. Cheap movies don’t even bother having sound in space, or showing the rocket engines on while the ship is maintaining a steady velocity. There’s this weird trope where ships don’t have artificial gravity. And planets have more than one city, culture, style of dress, climate zone, and language. And they always get the terms for planet, star, solar system, and star cluster wrong. But you’ll still get movies about joyriding gangs of teens marauding around the space lanes getting into kooky trouble, or an improbable and mysterious Earth hero who can hold his own against an entire fleet of wolf raiders.

Meanwhile, over at Time of the Apes, the apes do have television. But they’re scared of robots. Instead, an ape has been captured by evil humans and is being forced to watch terrible movies with his only companion a puppet primate who is definitely not a lemur but still insists that he is.

I would like to see the crew take on Kickpuncher.

mass-produced Tom and Crow robots that you can buy and take home to watch TV with you, and there’s no shortage of low-grade TV to riff on, either.

Okay, but this reminds me of a webcomic called Freefall, where at one point they mention that most of the robots are connected to the internet via transponder, and so now I’m imagining Tom and Crow robots basically doing RiffTrax as a feature for some theater.

My second thought is that it’s highly likely a Tom or Crow Buddy™ (patent pending) would be a tremendous liability given what regularly occurs in the host segments.

Rollerball MST3K would likely be 100% deadly serious propaganda made by one competing city-corporation to undermine the others. The silhouettes of Tom, Crow and GPC will be played by malfunctioning real-life AI. The host will be a real-world, low-level employee of the company producing the programming. The riffs will not be riffs, but provocative critiques meant to fire up the fanbases of the local corporations for that week’s contest.

Sooooo…with some exceptions, it’s pretty much the plot of MST3K itself, with Gizmonics/Deep 13 representing the evil corporation. Right?

Right. Now, if you’ll excuse me, it’s time for me to stand for our Corporate Hymn: 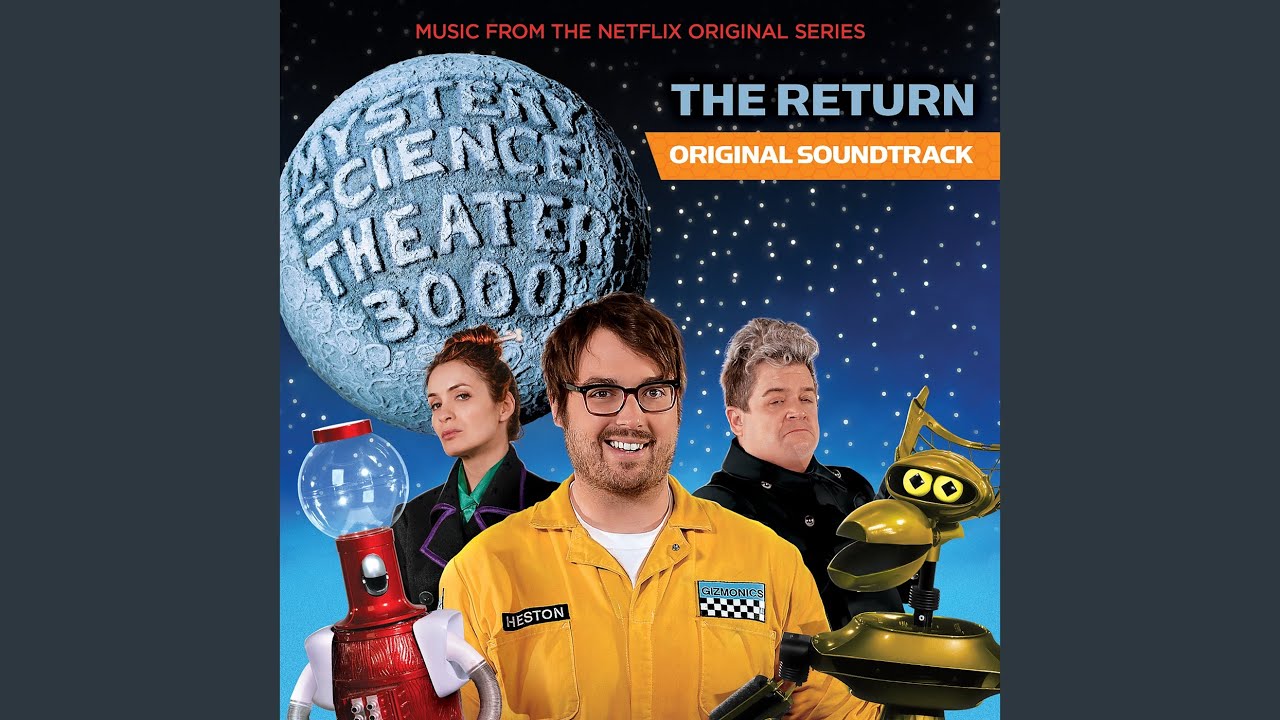 That premise amuses me, if only because “yes, ‘a bunch of people sitting in a theater shouting at the screen’ is a premise that is going to take itself completely seriously.”

I was actually trying last night to think what Rollerball MST3K would look like. Because, as far as we can see in the original 70s version (I haven’t watched the 2002 remake), rollerball is the only popular entertainment on Earth. Unless I forgot a scene where literally anything else was on the TV (besides the news reporting on rollerball). There are libraries. Even computerized ones. But they’re heavily censored and even altered.

But it’s not like the Corporations are in competition. They’re interconnected monopolies. (Pause to refresh my memory on what the corporations specifically are.) Food and Housing are not in competition. People need to buy both. Transport and Energy depend on each other’s services. They all need Communication. Luxury is the odd one out, the only one depending on disposable income left over from people budgeting for the other five. On the other hand, the executives and middle managers of the other five are definitely spending a lot on Luxury, so it works out. (Oddly, the whole system depends on people earning a living wage. But that’s another matter.)

All the same, the entire point of the sport of rollerball was to foster tribal loyalty to your employer’s team while subsuming individual identity. So I suppose some “good-natured” mockery would not be out of place. It’s tricky, though. You don’t want animosity towards your business partners. You just want loyalty to your own corporate culture. And what would they even riff on? What media is Energy producing that Housing could access for riffing, and why would Energy keep producing that if they knew that more people (the residents of the other five corporate cities) would be watching it riffed than unriffed (their own resident employees)? And isn’t it dangerous to encourage mocking corporate culture?

The whole setup seems more like Overdrawn At The Memory Bank where, because corporations don’t want anyone thinking for themselves or using their imaginations or developing individual tastes, most media is forbidden.

Well, I mean, MST3K is very much an underground thing. But it probably requires a culture of cinema that you’re implying doesn’t exist.

It might exist? I’m having trouble imagining it. But people need something to do with their weekday evenings and Saturday nights. Rollerball is only on once a week.

The corporations are very much against any underground they don’t control. All subversion is to be stamped out.

But, even so, there’s a lot of worldbuilding left undone. Just because I’m not imagining it doesn’t mean you can’t come up with a workable frame. I’m not trying to shut you down here. I’m just trying to think through what’s possible that fits with the world we’re given to see.

All very awesome points that I didn’t totally consider in my original post, @RocketJForklift, and really informative with the worldbuilding of the Rollerball society.

I had only seen the film for the first time last night, so in many ways I only have a surface-level appreciation of the dynamics of that universe. I’m glad Shout included two separats commentaries with both its writer and director, which may shed more light on why things are the way they are in that universe. Dated aesthetics aside, it’s such a rich dystopia. Pun kinda-sorta-but-not-quite intended.

I don’t really have deep lore on it or anything. I haven’t heard the commentary tracks. I watched it once years back and then gave it some thought and read up on it a bit. It’s an interesting idea for a movie. And something to be said for a film that’s even older than I am and yet predicted a dystopia in which a handful of giant corporations control everything and people are just content to ignore the problems with that and consume the media they churn out.