It's your OPEN THREAD for the first Gizmoplex event of 2023: Crow T. Robot hosts the FESTIVAL OF SHORTS! 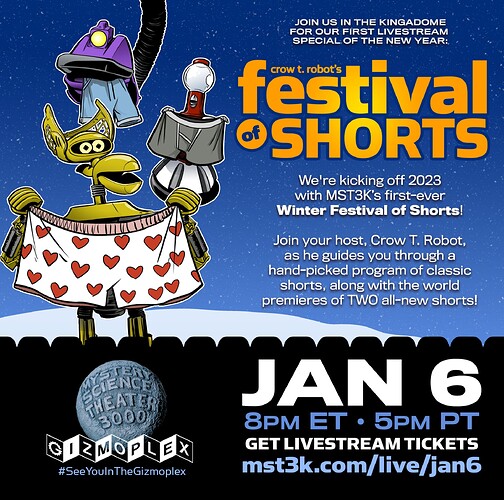 We’re kicking off the new year with MST3K’s Festival of Shorts, hosted by none other than Crow T. Robot! Crow will guide us through a selection of classic shorts, plus TWO – yes, TWO – brand new premieres.

If you have watched the new episode in advance, DO NOT POST SPOILERS about the episode without encasing them in spoiler tags! Let’s not ruin the fun for those seeing it for the first time.

Spoiler tags look like this, without the extra spaces between the brackets:
[ spoiler ] and [ /spoiler ]

Your spoilers will then look all blurry like this: THE PAPER CHASE GUY KILLS MEGAWEAPON, so community members can decide if they want to click on the blur and see what it says.

You know ya want shorts, baby!

Who do we need to email about the Gizmoplex Season Ticket seeming disappearing from one’s account? I KS’ed this season and yet it’s saying I need to buy a ticket to watch the festival of shorts…

After this, we have 3 more events left.

It’s not live yet. That’s probably the reason.

I wonder which Crow is hosting? and have not seen the new shorts separate yet. Guess I will have to watch the whole thing.

Actually I found a different way since Crow in the Kingadome is saying I don’t have a season pass anymore. Apparently I can sneak in through the base gizmoplex site instead.

Time to sing the praises of pants!

What am I missing here?

Hmm, just checked this, and yeah that’s not the normal “you’re too early” message.

Sending up the @ivan signal in case some switch needs to be thrown as it’s a new year.

Did you go to the Backer Atrium? Did you not see that it’s a giant moon ornament?

Wasn’t that there last month?

Maybe? But I don’t know how many people check that level every month for easter eggs.

I see a different message now from Crow and can get into the theater. So either we were too early after all, or something screwy has now been fixed. Try it now, and let me know if you are still having the same issue.

Got a good feeling this is going to be a pretty fun show. Lots of creative avenues the show can go with this concept, and it might do well to provide some cool variety to the proceedings.

Of course, I’ll be watching and will do my best to follow along live…this week has been extremely tough at work, and I have one day left, but hey - I’m home and it’s MST3K! What more can you ask for? I mean, other than winning the lottery or free cars or a big cozy house or…