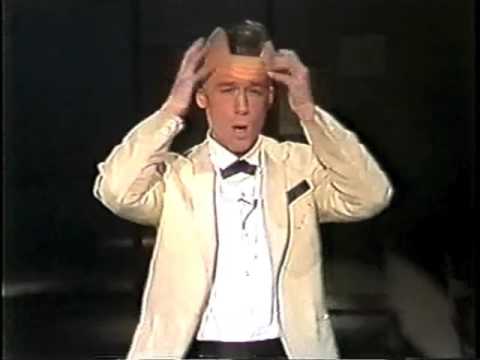 As evidenced in these classic Letterman clips, you can see it all springs from Joel. I’m noticing now that the show continued to use his props and humor even after he left! The experiment was going on for quite a while before KTMA, what with “Mystery Science Lab 2000” in 1984!

Try though I may, I can never forget the sight of J.H. trying to shove his whole face through the Mystery Date door.

Just think, if he’d stuck around for a few more seasons, they could’ve worked a callback into the Santa Claus scenes with the freaky giant mouth.

Try though I may, I can never forget the sight of J.H. trying to shove his whole face through the Mystery Date door.

Mystery Date was my favorite bit of his. I told him that at a Cinematic Titanic show and he just said “Oh, that was a long time ago” and didn’t seem too happy. Maybe he was in a bad mood that night.

I thought I was the only one traumatized by that game. Maybe it was similar to the whole thing where his sister made him play Soap Opera.

I thought I was the only one traumatized by that game.

The thing that always got me in Joel’s routine was the way he would say “Will he be a dream? Hmmm. Or a dud? Hmmm”, and it was pretty much the same sound after each one.

I find it curious that Joel would be brought to the desk for what seemed to be an interview but was really just a short continuation of the act. Usually when a comic was on the show, they’d go straight to commercial at the end, then it would be the end of show “thanks for joining us” bit before credits.

I wonder why this was the case with Joel. Did he want to extend the act to two locations? Was he uncomfortable with being interviewed? Was it a decision of the show?

Getting invited to the desk was a huge honor. It meant JC (no not that one) liked you and was giving you more time.

For a Comedian in that age, Johnny waving you to the desk, was the highest honour.

That small gesture changed the career path of many.

I understand the Johnny honor, and that probably also existed with Letterman which is who we’re talking about here, but what I’m wondering is why isn’t it an interview?

JC (no not that one)

I’m still saltier than a can of Dinty Moore that The TV Wheel didn’t get a chance to grow and develop into the amazing TV entity that we all suspected it would have become.

There were some really great people on that project, too. I would have loved to see it go to series.

I think it was just a little too out there for it to have been greenlit. Honestly, I’m amazed Comedy Central aired it. A joke like, “there but for the grace of Jerry Anderson go I” would have been esoteric by MST3K standards.

You don’t suppose Joel owns the rights to it, do you? I wouldn’t mind seeing a good transfer of the TV Wheel as a Kickstarter stretch goal.

(Though it would be understandable for people to be like “I would have preferred another KTMA episode.”)

I think Dave did that a lot, and was totally planned to go that way—very different from Carson. That’s how a lot of Pee Wee’s appearances went, too. I always thought Dave had both those guys on in part because he personally liked their acts and wanted to support their careers