Jonah Ray at the Drive-in Jubilee

MST and Joe Bob in the same room. I’m going to feint.

The Jamboree will be chock-full of fun. Some highlights for Jonah:

I don’t think he did the “Al” thing. There wasn’t a lot of time for that, what with all the Elvii running around.

The spontaneous riff of Hogzilla was a lot of fun. Jonah was joined by “The Last Drive-In” cast members Austin Jennings, John Brennan and Darcy The Mail Girl.

Jonah was also great at the convention. We had a nice long chat about Dr. St. Phibes, Joel, and why he doesn’t visit the forum. He did a fun sit-down with Austin Jennings and the two compared notes on directing MST3K vs. TLDI.

Fun weekend. Not much sleep, though.

I don’t think he did the “Al” thing. There wasn’t a lot of time for that, what with all the Elvii running around.

He performed his punk versions of Amish Paradise and Every Country Has a Monster. Then he and John Brennan performed “the shortest version of Marc Cohn’s Walking in Memphis”

Saturday night was jam packed with music. Not only was there an Elvis impersonator, but everyone got on stage while Dave Sheridan sang Shout as Officer Doofy, then Joe Bob and PJ Soles singing Rock ‘n’ Roll High School. It was all pretty wild.

Here’s a pic I took of Jonah on stage. 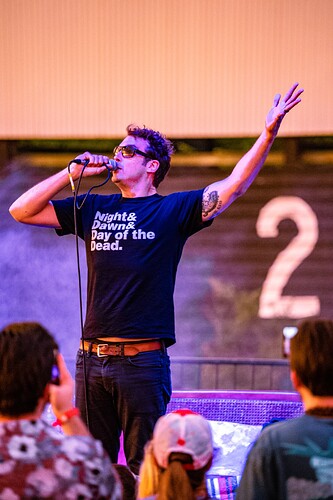 Ha! I think I started a run on that shirt. I bought the last large he had and then everyone was like “Where’d you get that shirt?!”

Did the 80s solos for Tina Turner as well.

Yep, Tim Cappello turned out to be a super cool dude. Great stories. If anyone is wondering, after 35 years, he still believes. 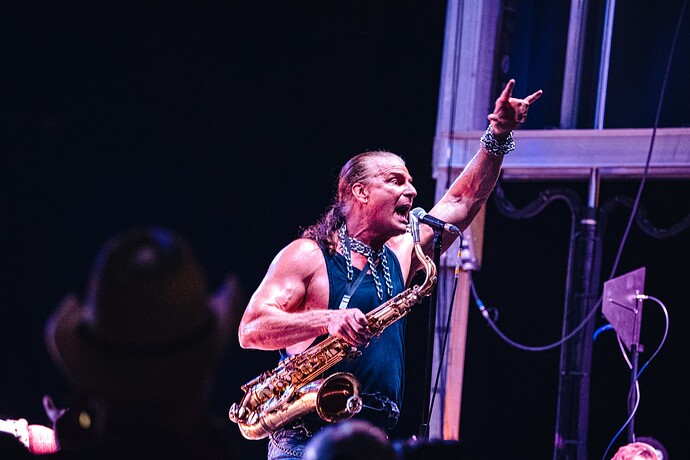 I didn’t hear his full Q&A but what I heard was kick-ass. And he can really play that sax!

Here’s a pic I took of Jonah on stage.

Possibly something pertaining to Hawaii, Jonah’s home state? I can make out the word “ALOHA” but not much else.

One more note that I almost forgot. During Jonah’s Q&A, he announced he will make an appearance as a drummer (not Bermuda Schwartz) in the Weird Al “biopic” starring Daniel Radcliff as Al. I had not seen that mentioned anywhere else. I want to say that he mentioned Patton will be in the scene as well.