Many Films Nobody Should See (or, Good Cult Films)

Indeed, and it also taps into the (still living) zeitgeist of “media as nihilistic entertainment”, with the future holding more and more bloody recreations of the games of ancient Rome. Other films like Rollerball also carried this vibe.

There was a real feeling at the time that popular media like film and television would engage in a race to the bottom and feed our worse natures, and honestly that was always a pretty safe bet. A more recent film that continues in this vein is Series 7, which posits a reality show where contenders kill each other. I like this film, and think it may fit the cultic mold. 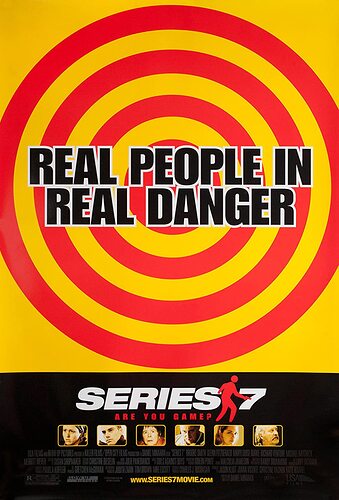 Series 7: The Contenders: Directed by Daniel Minahan. With Brooke Smith, Mark Woodbury, Michael Kaycheck, Marylouise Burke. A TV program selects people at random to kill one another for fame and their freedom.

I think were starting to stray from cult on some of these, Last Picture Show? Alice Doesn’t Live Here Anymore?

Yeah, I can buy that.

It’s somewhat hard for me to tell what is actually a cult picture and “prestige” pictures that probably most people, say, younger kids, wouldn’t probably have seen (yet).

I don’t really know how to define a cult picture: there are certainly “arthouse” movies that didn’t do much box office, but were respected at the time. Even Lynch, in many of his pictures, is very well-known…and yet…there’s some kind of cultish aspect to many of his personal pictures.

If you, @JakeGittes, a have better sense than me, as it seems like, where does Antonioni’s “trilogy” (or tetrology, depending on if one includes Red Desert) fit in on the cult scale?

They’re classics, and I think any general film book will mention those, but there’s a sense in which they’re so alien from anything ever made elsewhere, almost inscrutable that I’m tempted to come down on “cult” for those, despite their notoriety and endless interpretations by film scholars.

“Come and See”, which might be considered art house

It’s one of the more recent additions to the Criterion Collection. 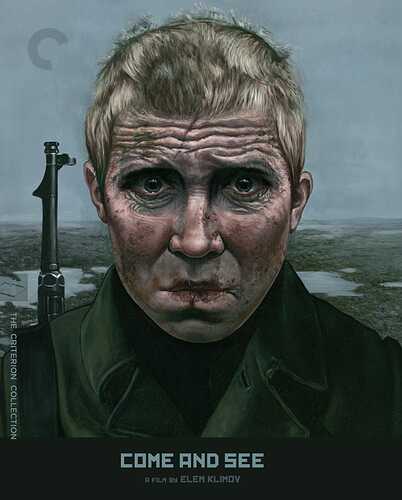 This legendary film from Soviet director Elem Klimov is a senses-shattering plunge into the dehumanizing horrors of war. As Nazi forces encroach on his small village in what is now known as Belarus, teenage Flyora (Alexei Kravchenko, in a searing...

Yup, and before that, I think someone like Kino had it.

And I remember the eye catching poster by Lemeshev 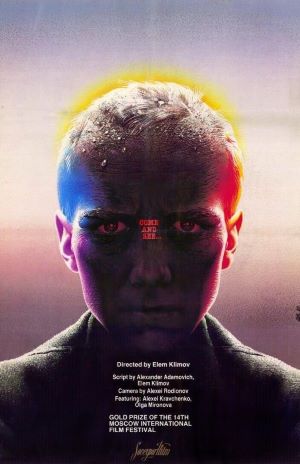 where does Antonioni’s “trilogy” (or tetrology, depending on if one includes Red Desert ) fit in on the cult scale?

I personally don’t see Antonioni as cult - Red Desert won the Golden Lion and Kurosawa considered it one of his favorite films, that’s a beloved, not rejected.

Some folks have a broader definition, but cult in my mind is the ugly baby, ignored by the mainstream but embraced or rediscovered by a smaller but devoted fanbase who sees the value in them.

It’s the midnight movie, the indie or underground film, it sometimes (but not always) spits in the eye of nice and sweet. It usually is unconventional, it’s Dementia (1955) not Singin’ In The Rain.

I think fans of this forum will get a kick out of a small '70s horror flick called “Messiah of Evil.” The scene where Anitra Ford is stalked by zombies in the supermarket is unforgettable (to me). Something about the colors, the pacing, etc.

If they’d been able to actually finish it, I think it’d be NotLD-level classic. I mentioned it in this thread:

I don’t know if this is obscure any more, but I’m a fan of Messiah of Evil. Written/produced/directed by long-time* wife/husband team Gloria Katz and Willard Huyck who are best known for writing American Graffiti, Indiana Jones and the Temple of Doom (my favorite, sorry h8rs!) and, of course, writing/directing Howard the Duck. The movie got half-made and the money people pulled out, then the film got into some nefarious hands, hashed up and released under often dubious circumstances. It is has…

Shudder is currently streaming a great print of this movie.

It’s really hard to find a copy of, but I do have one.

It is available on the Internet Archive.

Possibly only obscure because of the country that released it, The Grey Fox

Very well regarded and publicized in the USA, IIRC. Farnsworth was great, and apparently Norm McDonald’s inspiration for dealing with his cancer.

Oh, this was on “The Last Drive-In” last season. Quite good, I thought. The question of whether any of it really happened was raised.

In a cast full of near-30-year-olds playing high schoolers, Clint Howard is the only actual teenager and he looks about 35. (They gave him a wig a few years later for Evilspeak and he looks a lot more plausible as a young student.)

The Dark Backward is probably my favorite film nobody should see. An amazing cast – Bill Paxton, Wayne Newton, Judd Nelson, James Caan – in some of the weirdest imaginable roles.

Before all the images were broken, I specifically referred to TDB in the "They Don’t Make 'Em Like They Used To" thread as a kind of low-but-not-micro-budget filmmaking you don’t see any more. I am perhaps inexplicably fond of it.

The Last Picture Show counts as somewhat a cult favorite, although IIRC it did make a number of waves

Er, yeah, it was nominated for six Oscars and won two.

But time can make a “cult film” out of anything, eh? Janet Gaynor won the first Best Actress Oscar for 7th Heaven (1927), but aren’t all silents now relegated to cult status?

Er, yeah, it was nominated for six Oscars and won two.

I didn’t know that!

Yeah, I’m going to stick with your and others’ definition of cult movies: seems more reasonable than whatever vague notion I had.

But how could I not mention Buckaroo Banzai? Well known? Sure among mega-super-ultra nerds, but I don’t think the average citizen is going to get the various famous quotes from it.

Laugh-a while you can, Monkey Boy!

It is available on the Internet Archive.

Oh dear lord, I hope not.

But how could I not mention Buckaroo Banzai ?

I’m down with that one. That’s crazy and unique enough to be included in the HOF

There are two versions, but in my opinion it’s a million times more effective, more creepy and strange without the narrator (Ed McMahon). With narration, it’s almost comical… I mean, the cheesy things he says, and the cheesy, horror host way he delivers his lines were quite funny to my ears and undercut the expressionism and psychosexual message. Allowing the visuals, sound, and performances to speak for themselves made it a better film.

It’s one of the more recent additions to the Criterion Collection.

Did not know this. And it’s payday tomorrow. I wonder what will happen next

And fair play @JakeGittes - ensuing conversation will help me recalibrate for future postings.

No worries - it’s a thin line, with lots of gray areas.

2001, for example, is considered a cult movie by some - those who are more inclusive and allow big budget, major studio films - I think due to the audience it attracted - college students, who were getting high and seeing it repeatedly, it had that cult-like following. Today it’s seen more as a universally appreciated masterpiece. But it’s one that’s been debated among people who debate such things.

And, to top it all off, this exchange allowed to earn the ‘Emoji Badge’. Which is really a thing. Such pride I feel right now.

Didn’t know this was a badge!

I hope I get it now! 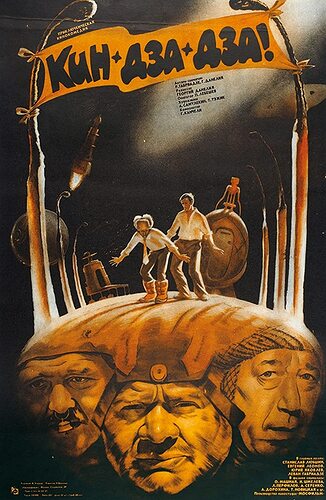 All shall have prizes!

Which, if any, of these films might you consider to be a cult film? 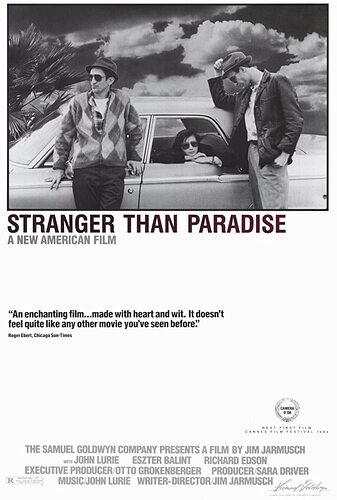 Stranger Than Paradise: Directed by Jim Jarmusch. With John Lurie, Eszter Balint, Richard Edson, Cecillia Stark. A New Yorker's life is thrown into a tailspin when his younger cousin surprise-visits him, starting a strange, unpredictable adventure. 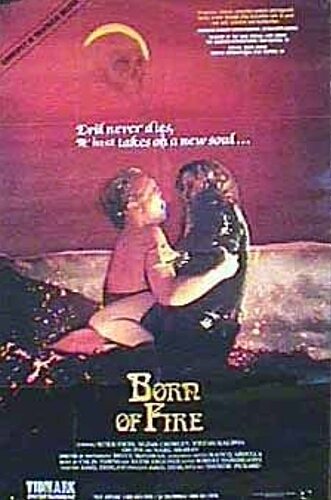 Born of Fire: Directed by Jamil Dehlavi. With Peter Firth, Suzan Crowley, Stefan Kalipha, Orla Pederson. A musician searches for the Master Flautist, a supernatural creature who is planning to blow up the world. 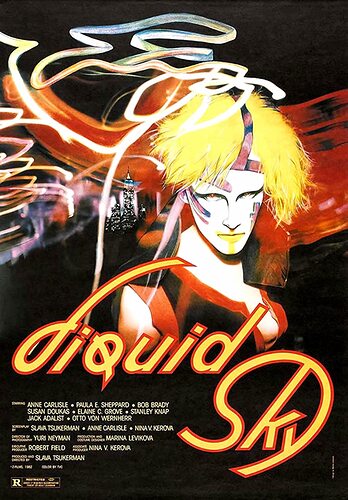 Out of the three, I’ve only seen Liquid Sky, but it’s definitely a cult film. Most people wouldn’t get it at all. I’m not even sure I get it.

It’s also a case of the movie being much better than the book, as the book was written after the movie (by the lead actor Anne Carlisle) and it clumsily retconns the alien out as a delusion of the protagonist. I have no idea why she did that, but it doesn’t work at all.

Not a bad flick and definitely worth a watch.

Don Coscarelli is underrated in my opinion.