Huh. Well today I learned something.

EDIT: Although their argument that 3D wasn’t gimmicky because some big films were made in 3D is spurious. Big films are made in 3D now and it’s still a gimmick.

I’m sure I have at least three sets of anaglyph glasses in the house – somewhere. I know I ran across at least one of them in the past year.

I acquired a pair quite by accident, in a Finders Seekers package. It’s a monthly subscription box-type thing that has a bunch of puzzles to solve each month, usually uncovering a thief from a group or a treasure location on a map. And usually there is something seemly random thrown in that’s part of one of the puzzles, like an “invisible ink” type marker, a foam finger, an apron, or - as luck would have it - a pair of anaglyph 3d glasses. I think that one had a t-shirt, too.

ICYMI, in the last “where’s my backer stuff” update they did indicate that they would ship the 3D glasses separate to get to us before the 3D episode, even if the rest of the stuff was not yet ready to ship.

Anyone know if the movie they are showing is red/blue or red/green?

Coz I’ve got this stylish pair of glasses: 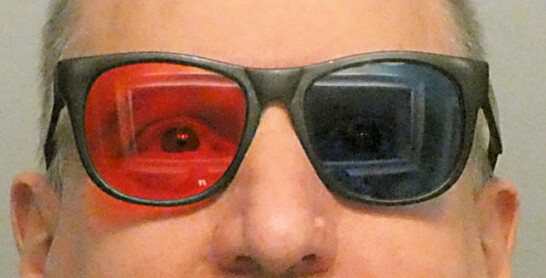 Back when the early mars rovers were sending back stereo images I got heavily into combining them myself instead of waiting for NASA to do it, so got a nice pair of red/blue glasses.

Edit: Did some digging, looks like the “masks” that were handed out in theaters in 1961 were red/cyan. And the still images I’ve seen do have the red/green tint in them.

I have a couple pair from other sources just in case, but I really want one of these on my face, to help set the proper Gizmoplex mood.

So maybe they redid the colors to be red/blue instead of the red/cyan?
I’ve done it for still images so I guess there must be plenty of software out there to do it for movies, it’s always best to match the color of the right and left images to the color of the filters in the glasses to prevent ghosting. That said Red/blue glasses do work OK for red/cyan movies.

I know I’ve got a DVD somewhere that has red/cyan glasses, but can’t remember the name of the movie.

Maybe we need a thread about 3D glasses…
The point of my original post is that we still haven’t seen anything about what the DIY Concession kit will look like.

Unfortunately, the concessions kit items are still tied up with the rest of the rewards.

I would think that we would at least have an idea of what we are getting by now is all.

IIRC, I got four cardboard glasses sets when I got Shrek 3D on DVD.

The delivery estimate page has been updated a bit (apparently on August 20), and it appears that early September is now a solid target for moving forward with collecting shipping info and getting the ball rolling.

So, here’s the dilemma we’re weighing: we do have the finished design and could share it with backers, but since we’ve shared the designs for every other reward, this was our last chance to leave something as a surprise to discover when opening your packages of rewards… and it feels a lot less exciting if you know EXACTLY what you’ll find in the package.

That said, if the majority of backers would prefer to see the design in advance, we’re open to sharing it. Just not sure which way everyone would be happier.

So, you all tell me…

When do you want to see the design for the CONCESSION KIT reward?

Is putting it under a spoiler tag an option?

Once it’s out, it’s out, and other people may have it spoiled on social, etc.

Knowing that it is a finished design and you are intending for it to be a surprise is enough for me. Thank you for the transparency.

Honestly Ivan,
Thanks for allowing us to have the choice.

I agree. That’s the important part, that it’s finished on Alterniversal’s end.