Movies you believe need to be riffed?

But the feeling of power you got when the teacher picked you to be the one to turn it.

Escape to Witch Mountain (1975). I loved this movie as a kid and didn’t realize until I recently watched it with a friend who hadn’t seen it how weird this movie is.

There was a sequel, that was nearly as weird. I saw it on opening day at the local mall. Probably the first movie I saw on opening day.

The books were pretty good. Actually, I liked the movies, the first better than the second.

The Dark Backward with Judd Nelson
The Magic Christmas tree (rifftrax did riff it!)
Left Behind
The conjuring ( i did not like the 1st one)
Twilight (rifftrax again)
Birdemic ( rifftrax)
Jingle all the way

The conjuring ( i did not like the 1st one)

The first one was fine (though not as good as the second.)

I think a better one from that series would be The Nun. Very pretty film, decent acting, but the plot was a godawful mess. Oi.

Annabelle Comes Home could be fun too. But that one at least partially knew it wasn’t being serious, so I’m not sure how well that’d work. I was actually pretty entertained by it. Though I think it would have worked better as a PG-13 film.

How about 1966’s “Queen of Blood” a.k.a. “Planet of Blood,” produced by George Edwards and Samuel Z. Arkoff (along with Roger Corman, who was not credited as the movie was non-union, and Corman was committed to working with union crews. Corman’s touch, however, is evident throughout.) Queen of Blood has a lot of fun visuals, some striking appropriated footage, and all is served up in glowing Sixties living color.

Parts of Queen of Blood were courtesy of two Soviet science fiction films. Their obviously higher-budgeted sets were combined with footage of sets built by “a bunch of hippies [working] as set decorators, and they were stoned all the time.” 1966 sounds like it was fun!

It’s the year 1990. Prompted by signals from outer space, a crew from the International Institute of Space Technology travels to Phobos via Mars to search for the craft of an alien ambassador who had evidently been on the way to Earth. They find a crashed alien spaceship on the Martian moon. The ship contains one survivor: a green-skinned, Troll-doll bouffant coiffed alien (the striking Florence Marly) who, we come to learn, has a taste for human blood. During the trip back to Earth, they keep her hunger at bay with blood plasma from the ship’s supply. However, the plasma eventually runs out. One by one, all of the human crew are drained, except for Laura (Meredith) and Allan Brennan (John Saxon, who delivers a vintage Saxon starts-at-furious-and-works-his-way-up performance.) Laura saves Allan from becoming a liquid entree by scratching the alien, who bleeds to death, though the wound is small. It turns out she is a “queen” of her species, and has stashed pulsating jelly-like eggs all over the ship. Instead of destroying her spawn, it is decided the eggs will be studied, meaning- vampire aliens are headed to Earth. Well- sure.

While it has its share of silliness, the movie does have a certain compelling eerie ambience. The alien queen’s glowing eyes, which she uses to hypnotize humans before feeding on them, spooked me as a kid. There’s a lot about Queen of Blood to have fun with, and a lot of quasi-psychedelic 1966 eye candy. The Wikipedia entry for this film says that Dennis Hopper was “trying very hard to keep a straight face” during the filming, and his performance does have a restrained, rather medicated, sunburnt Laurel Canyon quality to it. Saxon rants; Basil Rathbone seems to be delivering his lines from the bottom of a brandy snifter. Platinum blonde Judi Meredith has a no-nonsense toughness to her, and she is the one that saves the day. And Florence Marly makes a very memorable alien vampire queen.

For having a budget of only $65,000, the movie manages to be engaging science fiction. At other times, it’s full of retro space kitsch. I think it’d be a great choice for riffing. 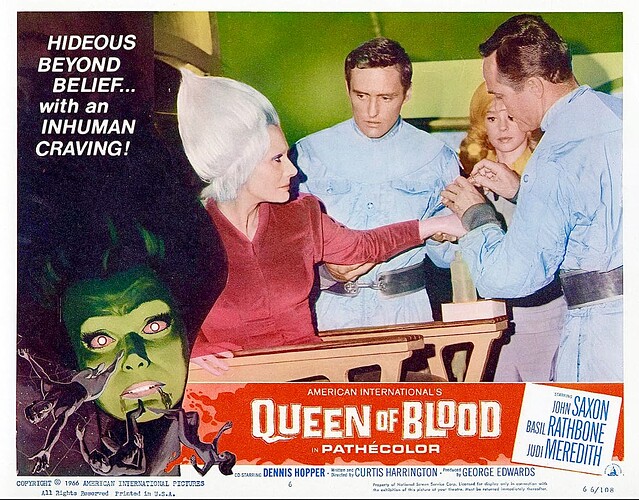 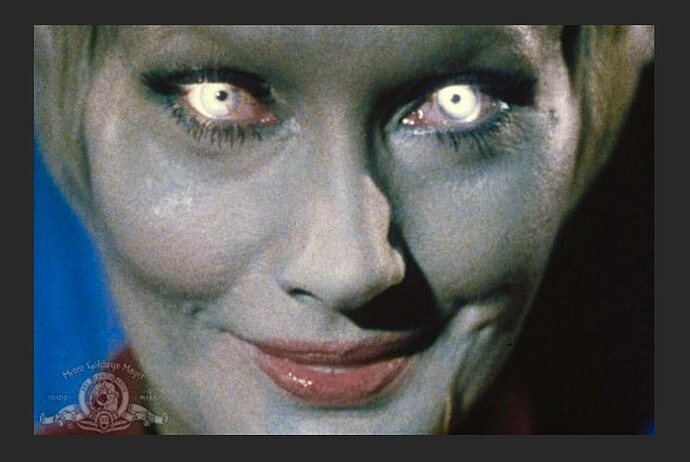 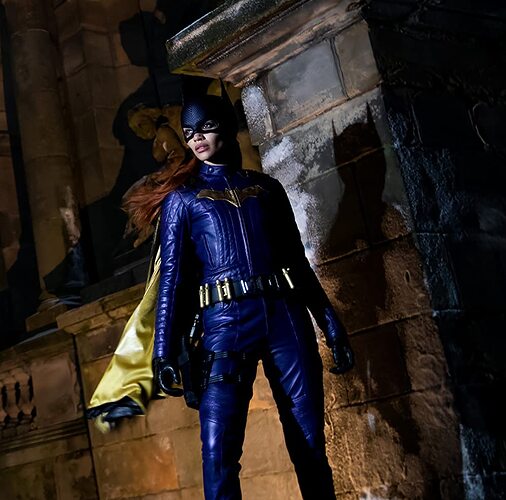 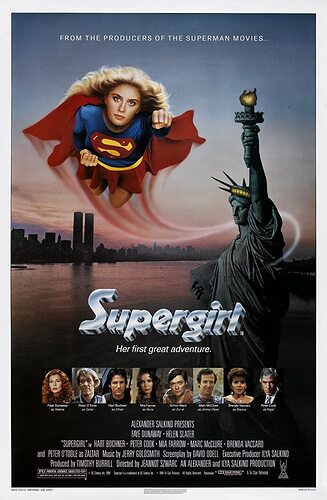 Supergirl: Directed by Jeannot Szwarc. With Faye Dunaway, Helen Slater, Peter O'Toole, Mia Farrow. After losing a powerful orb, Kara Zor-El, Superman's cousin, comes to Earth to retrieve it and instead finds herself up against a wicked witch.

I have that movie. It’s not one you find yourself watching often.

It’s not the worst one. Try the 3rd movie they made. There’s a different version of the 1st movie where everyone has a twin. Some people have to find their twin, and they instinctively know who this previously unknown about twin is. There are so many flaws to unpack there. There are 5 various movies with the premise.

Supergirl (1984) I didn’t hate that film. I know that’s not a popular opinion.

I have a real soft spot for The Dark Backward and just about any truly odd, original DTV of the era.

Traxx; the cookie baking 80’s mercenary action hero.
I still has the vhs I spotted in clearance bin of a defunct rental shop. Every now and then I check if it had been released in some newer format. It’s a weird movie and needs some love.

Since we’re doing 3D movies now, what about Metalstorm: The Destruction of Jered Syn? It’s the best of the ripoff mad max genre and I love the early 80’s cheesiness of it all… 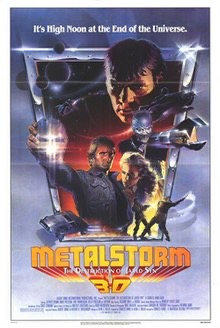 These are shorts and not movies. But there is SO. MUCH. promising fodder here. Some of these have already had riffed versions, but so what? 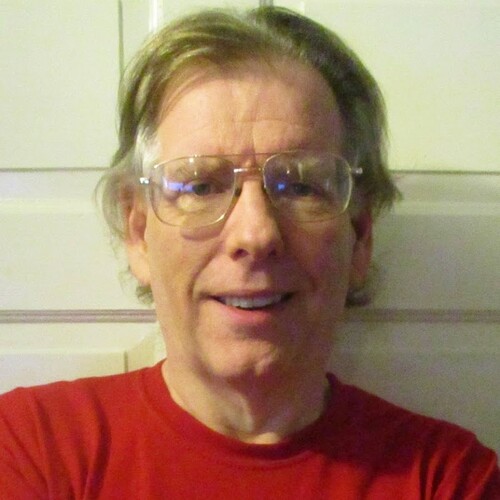 Composer and Conductor. Soundtrack Music, TV Themes, Short Films, Movie Trailers and other odds and ends. Thanks for stopping by my channel. Peace and Love.

I think “Gags And Gals” is the second or third most appalling and/or nonsensical short I’ve ever seen, so that would be my first pick. “This Is Coffee” would also be great. 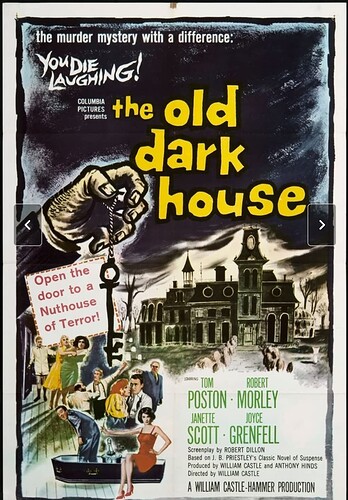 Screenshot_20220912-000109_Chrome1078×1545 191 KB
I just watched this on Creature Features. This is a remake that turned a Bela Legosi movie into something absolutely horrible. The set was assembled poorly. Things wobble, a stone wall goes squish, the editing needs work. There’s one person playing twins. Suddenly the twin in the left coffin disappears as it pans to the right where the other twin is supposed to be. The script is like a mash-up of Clue, Transylvania 6-5000 and a Larry Blamire movie except not as good. Honestly, I’ll be impressed if anyone can make it watchable.

Correct me if I’m wrong, but we haven’t had Billy the Kid Vs Dracula yet have we?

Definitely this is right up the MST3K alley.

My long-standing dream riff came true a couple years back when Rifftrax did Double Dragon.

So now my biggest riff-wish is for MST3K to take on R.O.T.O.R. Rifftrax already did it, but believe me there’s enough to go around. It’s simply my favorite bad movie ever. It’s bad in the wonderful entertaining way. It’s never a slog. There’s always a bad special effect, or a bit of baffling logic, or a weird piece of dialogue, or a failed attempt at comedy relief. Just a joy from start to finish.