I wonder if one of the reasons we got episodes like the Coleman Francis films and The Starfighters is because the 24 episode season order forced them to take on stuff like that. Also, now that MST3K is a bigger brand than it was during the initial run, I wonder if that has allowed them to be choosier when it comes to the movie selection. I do think that the movie selection for season 11 felt like the most representative of the spirit of the show, a distillation of what makes the show work, and that includes the occasional inexplicable train wreck (Carnival Magic in this case).

I really appreciated this, and it helps to get an idea of the different types of movies you guys sort through. I appreciate the family friendliness of the movies. As I’ve said before, MST3k has been a big help in getting through the pandemic for pretty much the reasons outlined in the update, the movies don’t drag you down, and the comedy is a mood booster.

during the tour that featured The Brain and Deathstalker i got the impression one show was more family-friendly and the other slightly more edgy.
Did i imagine that?

Questions for MMcG: is there any interest in making any more “adult” shows(either live or recorded)?

and similarly: if/when quality but off-color riffs are pitched during approved shows do you all ever struggle to massage a riff into less inappropriate shape to include it?

I have to say I’m surprised they would even consider riffing on The Final Programme, also sometimes known as Last Days of Man on Earth, which is my preferred title just because it has the most gloriously insane movie poster ever, that has practically nothing to do with the actual movie. I’m guessing Matt just grabbed the movie off the available Shout Factory list, seeing that it was a low budget British sci-fi apocalypse story and wasn’t aware of what it was based on: 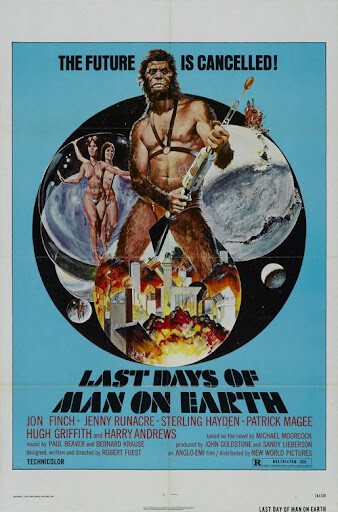 The Final Programme is an attempt to adapt Michael Moorcock’s first (and arguably best) Jerry Cornelius novel of the same name, and while it only halfway manages to capture the weirdness of the book (and somewhat botches the ending), it’s unriffable in the same way that nobody should ever attempt riffing The Prisoner.

In fact, tonally, I’d say it’s about halfway between one of the more psychedelic episodes of The Prisoner and a Pertwee era Doctor Who episode, with a little bit of Emma Peel era The Avengers mixed in. Yeah, it’s weird as hell, and extremely overacted in parts, but it’s meant to be psychedelic and trippy (and bleak). You might as well try to riff The Damned or The Bed Sitting Room. There’s a difference between unintentionally (or incompetently) goofy, and something that’s deliberately over-the-top surreal. Totally wouldn’t have been a good MST3K pick.

The Final Programme , is now on my watchlist.

And The Damned, I actually like that movie. It’s a weird genre mash-up, where you have teenage punks, mutant children, an eccentric artist, all wrapped up in a kitchen sink, apocalyptic sci-fi mystery. That sounds crazy (and it is), but it has something to say and it says it with style.

@Lesley One thing I would like to know is: Do you guys have a process for handling movies and shorts that are (supposedly) in the public domain, or do you just let Shout handle all of that as well? If you do look at public domain stuff, is there an actual definitive source that can be checked to determine if somebody has filed a legal claim of ownership on something?

There are a lot of public domain movies with good clean prints (•cough• •cough• Terror Beneath the Sea and The Man Without a Body •cough•) that seem perfect for riffing, but if there’s one thing I’ve learned through my friends over at OSI-74 and Cinema Insomnia it’s that trying to figure out copyright status on a movie is like being told to “go long” in a minefield.

The Final Programme , is now on my watchlist.

And The Damned , I actually like that movie. It’s a weird genre mash-up, where you have teenage punks, mutant children, an eccentric artist, all wrapped up in a kitchen sink, apocalyptic sci-fi mystery. That sounds crazy (and it is), but it has something to say and it says it with style.

I’m a huge Hammer buff, but hadn’t even heard of that one until it popped up on the latest BluRay collection that has a lot of their more obscure horror/thriller films that didn’t involve vampires, mummies, or Frankenstein. I was surprised by how much I enjoyed it. It went from almost cartoonish street punks to incredibly bleak atomic war social commentary by the end.

I quite like The Final Programme too. In fact, now that I know it’s out on BluRay from Shout, I just ordered it. I love trippy British sci-fi from the 60’s and 70’s, and this is one of those things to pop in the DVD player when I’ve run out of Nigel Kneale to rewatch.

Do you ever take movie suggestions, and check to see if they’d fit the necessary profile?

I completely agree, and I never realized how different all our tastes were until I looked at people’s rankings of their favorite episodes from the new seasons. Atlantic Rim and The Christmas That Almost Wasn’t were consistory ranked in the bottom, while they are two of my favorite.

What movie do you want them to do?

Do you ever take movie suggestions, and check to see if they’d fit the necessary profile?

I’d strongly suspect not, due to the way they pull movies from available packages already owned or easily obtainable by Shout, rather than going after any one specific movie just because it’s known to be bad. That’s how it was done all the way throughout the original Comedy Central and Sci-Fi Channel runs as well.

There may possibly be an exception for movies and shorts that are in the public domain… though they’d still have to be able to verify this (which is harder than you may think) and source a good high quality print suitable for streaming on modern TVs. Just because it’s up on YouTube or Internet Archive doesn’t mean it’s something they can just download and use.

I do know The Mads take riffing suggestions, but again, they’re only interested in public domain stuff.

To answer your first question about “adult” shows; it hasn’t really been discussed. I think we’re all pretty happy with how the content of the show is.

And about off-color riffs; we’re not above the occasional naughty joke, but if it’s too explicit, we just have to let it go.

I think that’s the right call. I’ve always preferred the classic PG-13 nature of MST3K. Leave it to Rifftrax to delve into the more adult-oriented “video nasty” stuff or uncut versions of movies like Hobgoblins. Other people’s mileage may vary, but I don’t see a need for a MST3K After Dark that would only appeal to part of the MST3K audience when there are still plenty of cheesy movies out there to riff on that the whole family can enjoy.

I also think the more adult audience films just aren’t as funny, or as easy to riff. I’d rather have them riff a creepy kids movie (like say… the public domain 1965 version of Snow White ) that you can really take the ball and run with, than a creepy “adult” movie, where there are only so many different ways you can say “ewwwww.”

That said, having grown up watching MST3K over the last 30 years, I love that there are always references you didn’t get the first time around, and I’m embarrassed to admit I now understand most of the naughtier riffs that went over my head as a teenager. (Most of which I’m just going to go ahead and blame on either Frank or Trace.)

Haha, if you’re interested, you can see what I deleted here:

Just a question based on one of the lines in this Update. “To make up for it, the Gamera Writers’ Room won’t be riffing a short.” So I know that the shorts aren’t intended to be literally streamed with the movies (that they’re intended to be shown in-between movie events), but I still found this statement odd, because it implies a few things (which could be a misunderstanding on my part). First, it seems to imply that each movie has its own “Writers’ Room”. It also implies that each short doe…

The post was intended for the topic on Backer Update #31, but I accidentally replied in this thread which is for Backer Update #32, so I just deleted it to avoid confusion

And about off-color riffs; we’re not above the occasional naughty joke, but if it’s too explicit, we just have to let it go.

The “Oh, she’s rubbing his belly” riff in Carnival Magic makes me laugh out loud every time.

I don’t know, mainly I was just curious.

@mattmcg22
thanks for taking the time to respond!

to follow up on my question about the two 30th anniversary tour movies maybe being MST3k-fun & MST3k-dark instead of saying adult.
before asking an actual question, i am guessing that if the cast performs a show night after night they might feel confined by the repeat-nature of tour.
So, the question is if the cast see the opportunity provided by a dip in attendance for the 2nd film after a packed 1st show might they take test-drive new jokes & or indulge in some more edgy, less vanilla riffs?

extra: Wouldn’t it be wonderful to produce a video/film/document of life on the MST3k live tour in the rough form of The Fuzz all Rally?
yeah, i know, great, more work & cost & aggravation, but why leave all those moments on your phones or social media?!

after reading the update about watching the bad-bad or good-bad movies from Matt and Lesley, I have sympathy for you for this job you do.

But I also wonder why you are not tapping the resources of the the network to make this an easier pitch? There are millions of fans out there that I am sure would jump at the chance to screen bad films for you as a sort of beta test group. I would bet there are fans that are even familiar with some of the films in the “possibilities list”. if you publish the whole list, and just ask people if they have seen any and do they think it is riffable? We would be thrilled to help out.

Nope. Nope. Load of hooey. I’ve been in the room. Leonard Maltin’s Movie Guide and a few dice.
Add in a case of whatever fell off of the truck and… here we are.
It works, don’t fix it.