To be fair this thread is called “MST3K Season 13” and then the contents of this was back in October and it was a sneak peak picture of production. This thread didn’t have a real direction, and the title leaves it open to encompass a lot.

I actually find the threads that specified the attention towards the announcements therein the Turkey Day Marathon to be a better solution, but maybe that is just me? I would of never coined this thread to be the place to discuss the announcements of what is to come.

Joel wants to pass along MST3K to the next generation. Seasons 11 and 12 symbolize this. Having Jonah or Emily host Gamera vs Jiger (1970) and KTMA subject binds them into the collective tapestry of the show that is beyond Joel himself. It is the concept not Joel Hodgson or Joel Robinson he wishes to have last and passing that Gamera torch or Sumuru (1967) to them fits what we’ve seen. Joel will host what most fits him now which might be those two or might not. Logistically all of Emily’s and Jonah’s solo episodes will be in the can prior to Joel shooting his. To fit best storywise I’d wager his will be 1311 and 1312 just by the math and what’s left by then.

Problem is so much is thrown at you on this forum and fast Humbledstone it’s hard to fully digest a thread as it emerges as a live topic and trending and people talk about it. The title is Season 13 and taking a look at the first post I’m fairly comfortable what follows qualifies under that umbrella. Perhaps a new topic might be preferred but until now I didn’t know this was an old conversation. I found this discussion first and already placed my energies and time into it. I’m committed to this and I personally don’t see a problem. “To each his own…” my friend. Write where you want. Either works.

I have no problem with people using this thread to share their thoughts and feelings about Season 13.

My issue is the OP went to threads that were specifically about aspects of the announcements and shutting them down because his thread already existed.

I’m of the same flavor my friend, to each his own. And write wherever you want. But to go to specific threads and complain that people arent using your vague thread is uncool. That makes people feel unwelcome and undesirable in the community.

I see. So your concern was directed at them? I get you. Thanks for explaining sir.

Yeah, and to be honest this wasn’t the clearest way of communicating that. I shared my concern on the specific threads alluded to here.

We already have a season 13 thread

I never saw the movie myself.

What’s the deal with the dash/dot in “Sumuru”? The title card says “Sumuru,” but the season 13 announcement logo reads “Su-muru.” Which is correct?

Probably the movie poster. IMDB also has it as one word. 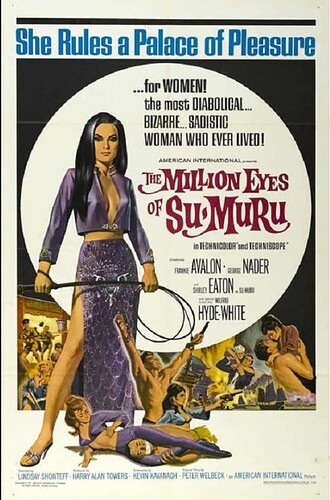 What’s the deal with the dash/dot in “Sumuru”? The title card says “Sumuru,” but the season 13 announcement logo reads “Su-muru.” Which is correct?

I’ve always hyphened it, as the posters do, as Rotten Tomatoes does, as the ACEG does, but we’re probably wrong as both the movie’s title card (as you note) and the Sax Rohmer novels, refer to her as Sumuru, all in one.

the extra “the” for Eye Creatures

The real question is: will the Gizmoplex listing finally drop the nonexistent “the” from Crash of Moons?

And whichever team gets to riff Su-Muru, somebody’s Servo is going to get to cross off a bucket list item.

I also apparently keep adding an “a”, rather than a “u” (Su-Maru) - I simply refuse to say and spell her name correctly. (Typos fixed)

Do you mean to say I’ve been wrongly calling it Crash the of Moons all along?

I just found trailers for The Batwoman and Santo in The Treasure of Dracula… wow!

Wow. I’m disappointed that From Hell It Came is still unriffed, but what a great set of movies for Season 13! Delighted they’re dipping back into the KTMA years, The Bubble looks unspeakable – and I wonder if the current “Time Bubble” tour was a hint, name-wise.

And I expect The Batwoman and Wild Wild World of Batwoman will make an awesome MSTie double feature.

Just look at some of the people appearing or involved in these movies:

Since we have our features all revealed now, let’s shift gears slightly.

What shorts (or at least type of shorts) do you expect for this new batch?

I’m thinking there may be at least one overlap Rifftrax short among the pack just to have a different take. I’m also thinking we may get a third Union Pacific short, as I’m sure there is at least one more that fits like “Last Clear Chance” and “Days of our Years” did.

Super long shot would be this for me: