It’s official, it’s going to be at least a few weeks until the next launch attempt; there isn’t enough time remaining in the current launch period to diagnose and fix the new hydrogen leak. Exactly when the next attempt is made depends upon whether the rocket needs to be rolled back to the VAB to fix the issue, the next launch period slightly overlapping with that of the next scheduled crew launch to the ISS (SpaceX Crew 5), and the weather as we head into the height of Atlantic hurricane season. Stay tuned.

What’s the deal here, guys?! It’s not rocket sci- oh wait, yes it is. Do continue.

While it’s too bad that it’s not happening right now, I’d rather have them take extra time and get it right than launch it just to launch and it blows up and then they have to start over.

IIRC, the segment seals in the solid rocket boosters have already passed their original expiration date thanks to the green run snafu — they were stacked over a year ago in anticipation of the green run being successful on the first attempt. If Artemis I can’t get off the ground soon, there will be a long delay as the SRBs will have to be unmounted and unstacked to replace the seals.

I’d rather have them take extra time and get it right than launch it just to launch and it blows up and then they have to start over.

If it blows up, and if SpaceX succeeds putting Starship into orbit (no, I don’t take it as a given), I think there will be a lot of hemming and hawing about continuing with the SLS program given the schedule and cost overruns, despite its success as a jobs program for the aerospace industry. Constellation was killed for many of the same reasons, remember, though it obviously didn’t stay dead.

Heck, they have to build a second mobile launch platform because the first one (which was modified from the one originally built for the Ares 1X test flight in a “cost-saving measure” that wound up costing more than building a new tower from scratch, and leans slightly) won’t be able to handle SLS Block 1B and later, i.e., Artemis III — you know, the first flight that’s supposed to carry the people that will actually land on the Moon? Moving from the Interim Cryogenic Propulsion Stage to the Exploration Upper Stage changes the geometry and weight distribution of the upper half of SLS too much from Block 1 for the current tower to handle. BUT the second mobile launch platform…

There are plenty of problems, I admit, but I also have to admit that a big part of me doesn’t care. I’m one of those people who will be happy if they’re able to get it done, whether it’s now or in five years. SpaceX is doing well, but I just find myself reluctant to have us sit back and let it be a business. Now, it could just be that I can’t look at it logically because it’s always been NASA in my mind, but as Moon Zero Two taught us (

), when businesses get involved, it becomes all for profit and science and exploration isn’t important anymore.

I mean, just look at all the Starlink satellites that keep getting launched. There are so many that they’re starting to interfere with scientific research, but that doesn’t matter. Keep launching those satellites.

but as Moon Zero Two taught us (

), when businesses get involved, it becomes all for profit and science and exploration isn’t important anymore.

It depends on the kind of exploration — just ask any fossil fuel or mineral mining company.

And NASA’s been quite clear that one of the main goals of Artemis is to find enough water at the lunar south pole to enable a permanent base there.

I mean, just look at all the Starlink satellites that keep getting launched. There are so many that they’re starting to interfere with scientific research, but that doesn’t matter. Keep launching those satellites.

Don’t forget Amazon’s Kuiper project and the ever-increasing number of LEO Earth observation smallsats! This sort of thing was pretty much inevitable as the minimum size and mass required for various types of satellites shrank. The one saving grace is that their orbits are low enough that should anything go wrong, they’ll naturally deorbit in a few years at most.

Good article on the hydrogen leaks: 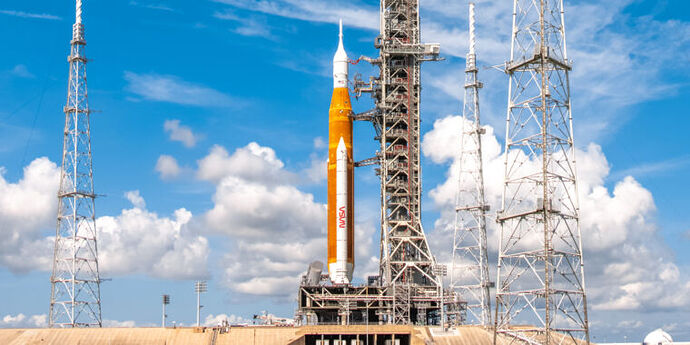 Years after shuttle, NASA rediscovers the perils of liquid hydrogen

"Every time we saw a leak, it pretty quickly exceeded our flammability limits."

There are reasons methane has become the go-to fuel for many of the next generation big rocket engines, e.g., SpaceX’s Raptor and Blue Origin’s BE-4. Sure, it doesn’t have quite the specific impulse of hydrogen, but it’s denser and so much easier to handle and store; that methane should be producible in situ on Mars is an added bonus. When reuse of the Space Shuttle’s RS-25 engine was mandated for SLS[1], NASA was pretty much stuck with continuing to use hydrogen.

Sounds like they are going to need to pull it back into the VAB (at the very least) as the seal problem is not going to be the easy fix they had hoped for.

This is the sort of situation where having a service structure that could be rolled up to the vehicle to work on it while still on the pad would be useful, like the ones they had for Apollo and the Shuttles. But the budget overruns, you know, combined with the low launch cadence…

Teams Continue to Review Options for Next Attempt, Prepare to Replace Seal

After standing down on the Artemis I launch attempt Saturday, Sept. 3 due to a hydrogen leak, teams have decided to replace the seal on an interface, called the quick disconnect, between the liquid hydrogen fuel feed line on the mobile launcher and the Space Launch System (SLS) rocket while at the launch pad.

They’re still going to roll it back to the VAB to reset/replace/recharge the flight termination system batteries, though. My understanding is that accessing the ones for the solid rocket boosters require them to be dismounted from the stack, which can’t be done on the mobile launch platform. 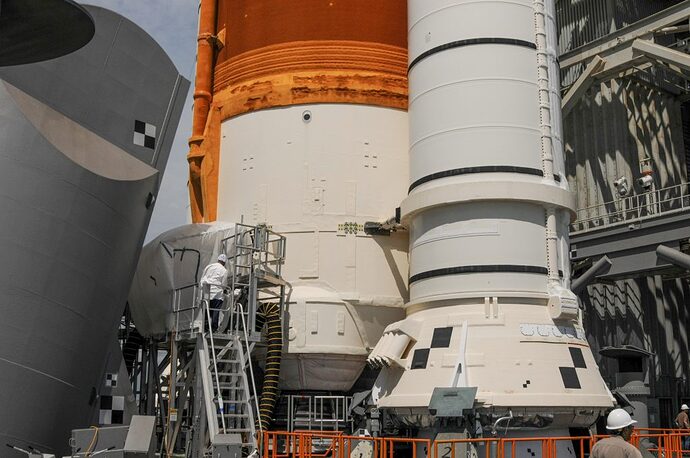 NASA’s Space Launch System (SLS) rocket is seen at Launch Pad 39B Thursday, Sept. 8, 2022, at NASA’s Kennedy Space Center in Florida as teams work to replace the seal on an interface, called the quick disconnect, between the liquid hydrogen fuel feed line on the mobile launcher and the rocket. Photo Credit: (NASA/Chad Siwik)

Engineers are making progress repairing the area where a liquid hydrogen leak was detected during the Artemis I launch attempt Sept. 3, and NASA is preserving options for the next launch opportunity as early as Friday, Sept. 23.

TL;DR — they’re still hoping to try again by the end of the month, but it depends on if NASA can obtain a second waiver for the flight termination system batteries. If the waiver isn’t granted, it’s back to the barn to reset/recharge/replace them.

After disconnecting the ground and rocket-side plates on the interface, called a quick disconnect, for the liquid hydrogen fuel feed line, teams have replaced the seals on the Space Launch System rocket’s core stage associated with the liquid hydrogen leak detected during the Artemis I launch attempt Sept. 3.

No word yet on the second waiver of the flight termination system needed to attempt launch at the end of September.

NASA has adjusted the targeted dates for a cryogenic demonstration test and to the next launch opportunities for Artemis I, the first integrated flight test of the Space Launch System rocket and Orion spacecraft beyond the Moon. The agency will conduct the demonstration test no earlier than Wednesday, Sept. 21, and has updated its request for a launch opportunity Sept. 27, with a potential backup opportunity of Oct. 2 under review.

NASA is still waiting on the review for the flight termination system waiver, however.

NASA will provide live coverage with commentary of the upcoming Artemis I cryogenic demonstration test beginning at 7:15 a.m. EDT on Wednesday, Sept. 21.

The demonstration test will allow teams to confirm the repair to a hydrogen leak seen during an early September Artemis I launch attempt, evaluate updated propellant loading procedures, and conduct additional evaluations. The demonstration will conclude when the objectives for the test have been met.

To repeat, if you want uninterrupted coverage of the leak test, be sure that you’re watching the Media Channel, not the Public Channel of NASA TV.

And no, still no word on the status of the second flight termination system batteries waiver needed for any launch attempt to occur at the end of this month.

Artemis I Cryogenic Demonstration Test on Track for Wednesday

NASA remains on track for an Artemis I cryogenic demonstration test on Wednesday, Sept. 21. In the days since the previous launch attempt, teams have analyzed the seals that were replaced on an interface for the liquid hydrogen fuel line between the Space Launch System (SLS) rocket and the mobile launcher and adjusted procedures for loading cryogenic, or supercold, propellants into the rocket. Engineers identified a small indentation found on the eight-inch-diameter liquid hydrogen seal that may have been a contributing factor to the leak on the previous launch attempt.

I’m beginning to think that the Range is awaiting the test results before announcing whether or not the launch waiver will be granted. Artemis I will be remaining on the pad regardless until at least Thursday or Friday.

The launch director has confirmed all objectives have been met for the cryogenic demonstration test, and teams are now proceeding with critical safing activities and preparations for draining the rocket’s tanks. After encountering a hydrogen leak early in the loading process, engineers were able to troubleshoot the issue and proceed with the planned activities.

So now we’re waiting on the Space Force FTS battery waiver decision to know if NASA once again attempts to launch Artemis I six days from now, or rolls it back to the VAB until mid-October. Hurricane Fiona is presently tracking to the northeast, and shouldn’t be a factor.