New Mads show Nov. 9 - "Voyage to the Planet of the Prehistoric Women" 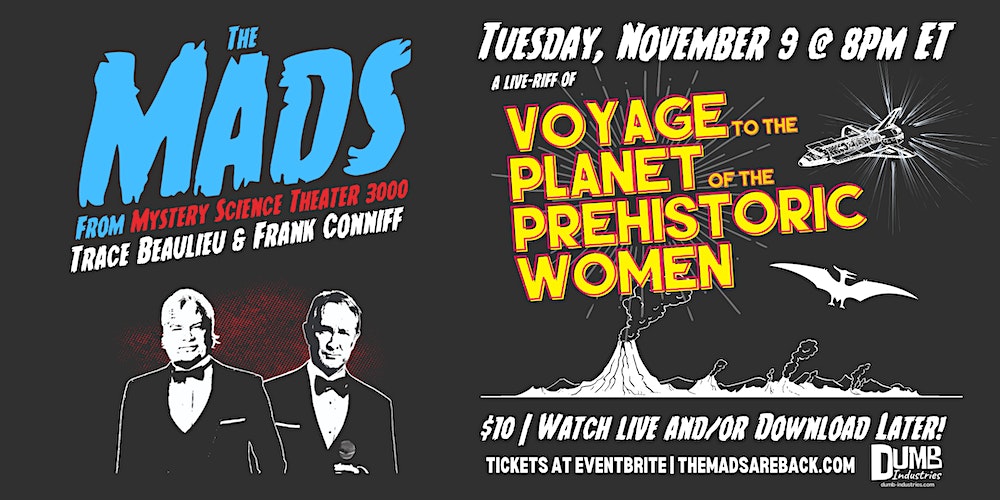 The Mads: Voyage to the Planet of the Prehistoric Women w MST3K's The Mads!

I just bought my ticket!

I think I bought mine, I’ll have to check my emails or the other Mads thread and see if I mentioned that.

I’ve seen the original, “Planet of Storms”, but never this version.

I had to do the same—since they hadn’t named the movie yet, I had no recollection of buying my ticket.

I add the shows to my calendar when I buy the tickets. Makes it easier to schedule things around some awesome riffing

I was reading up on it, and Corman managed to get a couple of movies out of footage from Planet of Storms.

I knew a bunch of directors came from the Corman camp, but I either didn’t know or had forgotten Bogdanovich was one of them.

I might sign up for this one; the time difference usually makes these events tricky, but we’re down to four hours at the moment and I’m off work next week to boot.

Tickets include a download as well, so that helps.

Thank you @FastidiousRobot for letting us (me) know. I now have a ticket too

I’ve seen both. The one the Mads are doing is the weirder version.

But you get to see Mamie Van Doren in a seashell bra.

And her name is Moana.

This is one that I wish that I hadn’t missed, and of course had it come to mind when PB passed away. The simple blunt reality of what it took to get it released ‘here’ is just so damn true and matter of fact . There’s some quite good work in it (well, Planeta Bur) and I suppose you could discuss various merits and assets til the seacows come home, but man… it’s a bit of a ride.

Dumb Industries is now selling copies of The Mads streams. The first 5 streams are on the website for purchase. Perhaps this one will be included later.

Yeah, they do a rewatch a year later, then put it up on Dumb Industries a day or so later.