To kick things off this was playing in Dayton, Ohio 60 years ago on Thanksgiving (November 22, 1962): 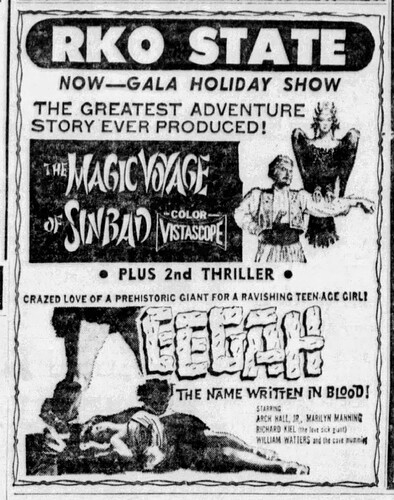 Not -quite- what you asked for, but I thought I’d throw this in here because it was tangentially relevant:

It’s a newspaper ad for the 1988 Thanksgiving debut of MST3K over at KTMA-23!

No problem, as I was just about to add the first ad to mentioned MST3K as well (with a still for a movie that quasi-made it to the show)! 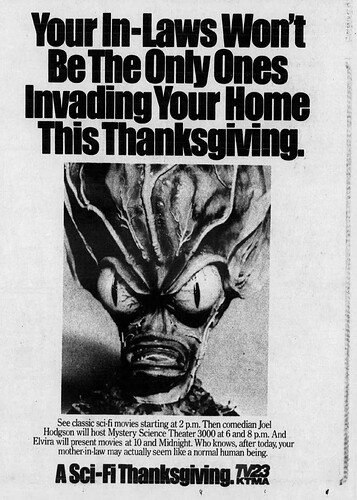 I truly hope the KTMA advertising team got all the kudos they deserved for these. Fantastic!

Boy, these aren’t easy to find! Here’s the first one I got, with the showing info cut off, unfortunately. 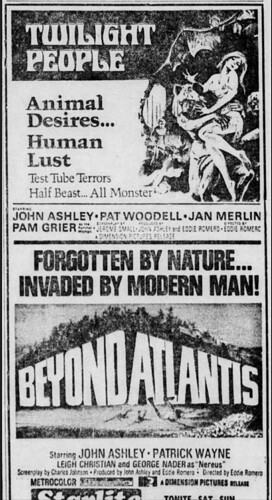 KTMA also ran THE MASK in 3-D back in the days. (Gosh, I miss Rax. Wasn’t a bad roast beef fast food chain.) 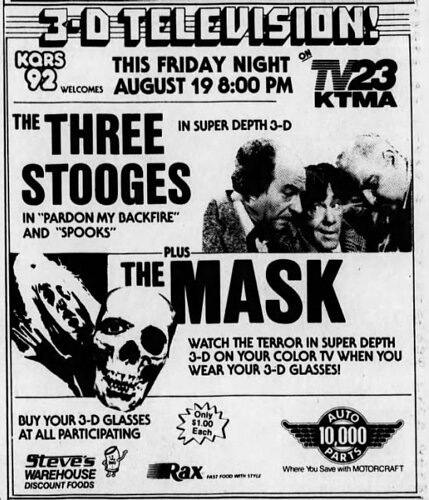 First New York showing? I bet the city was all a buzz! 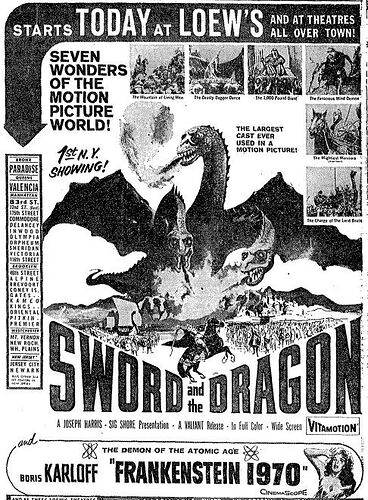 Also, while not a 2022 Thanksgiving experiment, “This is the big one” would be the perfect Turkey Day catch phrase (BTW, Gorgo was last seen on Turkey Day in 2015) 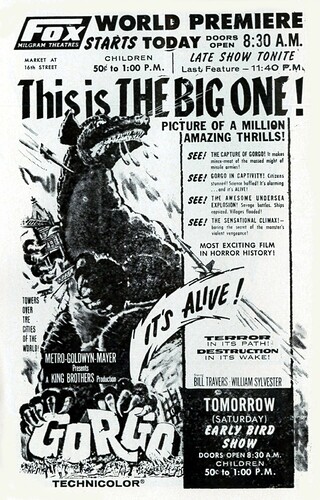 DEATH AND TURKEYS! Death to turkeys? The turkey’s the turkey you turkey? It ain’t cool being a jive turkey this close to Thanksgiving?

This will be the 7th time Mitchell has shown up on Turkey Day, most of any movie/episode. 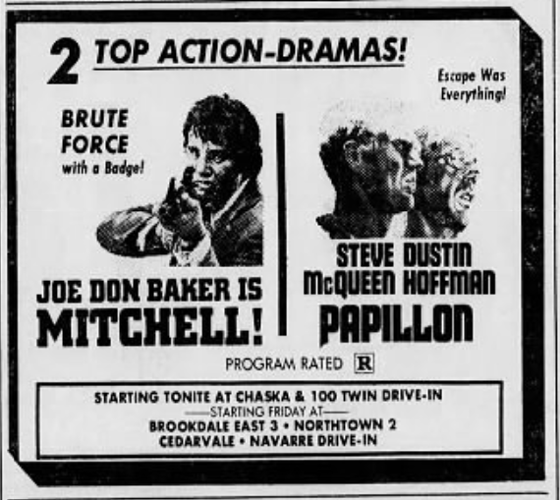 Looking at the full page, and you could also see Jaws and Deep Throat around that time as well. I wonder how many people thought, “Hmm, should we see Jaws, or Deep Throat… lets split the difference and do Mitchell, I hear it’s got a baby oil love scene and it ends with a thrilling scene on a boat in the ocean!”

I had no idea MST3K and Elvira aired back-to-back on KTMA, that’s awesome. Was that common during the KTMA days or was this a special occasion?

KTMA typically ran Elvira’s Movie Macabre later on Saturday nights, while MST3K usually aired around 10 AM. From what I can tell from the television schedule in the Star Tribune, Elvira’s show was on its way out just about when MST3K came in through the door at KTMA, so there wasn’t much chance for the two shows to bounce off each other.

The Starfighters … premiered in March 1964 as a co-feature with Disney movies, typically A Tiger Walks, although sometimes with Three Lives of Thomasina. Typical newspaper ads have our Turkey Day movie listed by name with no artwork, but by April 1964 when it was running in Boston with Muscle Beach Party, there would at least be a few pieces of artwork from the movie poster for it. Everyone seemed to understand this was a stinkeroo from the start, no matter how thrilling they tried to make the poster.

Here’s the movie poster and the best that ran in the papers back in the days. 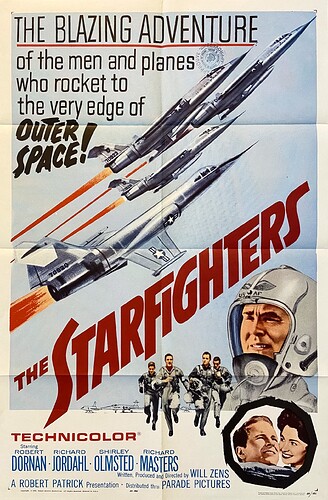 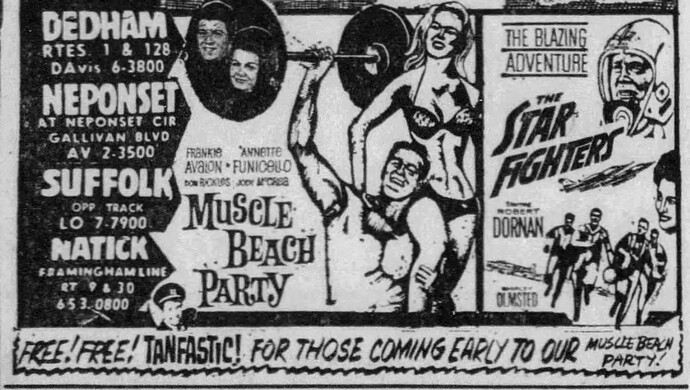 Catalina Caper is another example of a movie that didn’t get any love straight out of the gate. Consigned to being the second feature for … anything else, Catalina Caper usually ran in 1967 with Hell on Wheels, featuring the beloved John Ashley. Then in August it ran at some drive-in in one of the most coincidental MST3K double feature ever. 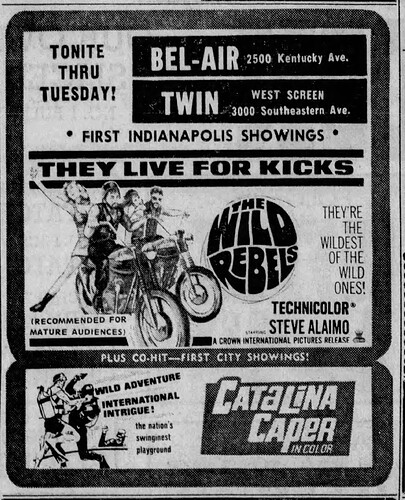 How does “Twin” only have one location?

There was a separate ad for their East screen.

Finally a big juicy newspaper ad for one of the Turkey Day films this year!

PARTS didn’t get much theater time, but seemed to bounce around the country playing here and there in 1979. The Kansas Star gave it three stars in a review and suggested it was better than the other body parts horror film, Coma.

Interesting is a second ad that shows it appearing as a second feature with Season 13’s own The Shape of Things to Come in Sacramento, which was also paired up that movie with another favorite, Star Crash in a subsequent theater! 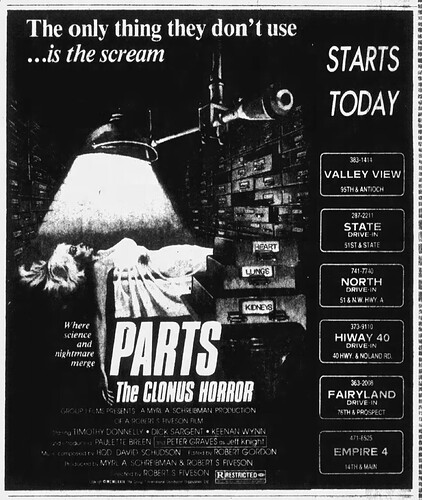 I’m pretty sure I watched The Shape of Things to Come. What does this ad have to do with that movie, I ask you? They have about as much in common as this movie and the book it’s “based” on, namely the title. This looks more like Army of Darkness.

Oh, I love this! I have vivid memories of my mom taking me to what I assume to be a different Starlite Drive-In theatre in my youth to see Twilight People…there was a heavy thunderstorm about halfway thru the feature, and we drove home to escape the deluge. I was crestfallen to miss the rest of the movie, having seen pictures of the creatures in a current issue of Famous Monsters of Filmland! No idea, though, if Beyond Atlantis was to be the second feature for our local drive-in, though…