🐒 NO ANTEATERS ALLOWED 🐒 in your OPEN THREAD for tonight's Tribute to OVERDRAWN AT THE MEMORY BANK! 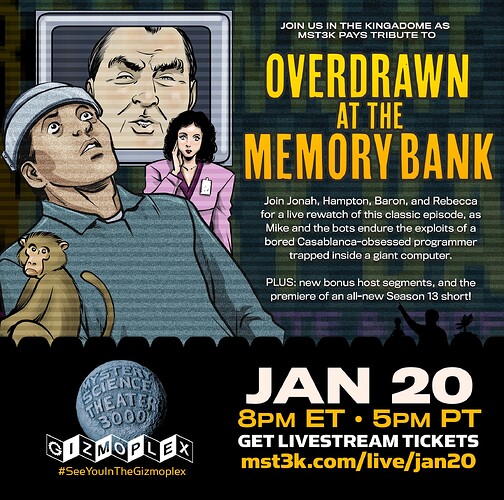 TONIGHT! Join Jonah, Hampton, Baron, and Rebecca for a live Riff-Along of the 8th season episode Overdrawn at the Memory Bank! Watch with our cast as Mike and the bots endure the exploits of a bored Casablanca-obsessed programmer who is trapped inside a giant computer, and who must battle an evil corporate overlord to escape his virtual reality.

BUT FIRST, we’ll be premiering a brand new short!

GOT QUESTIONS for our live guests?

Also, PLEASE INCLUDE THE NAME YOU’D LIKE TO BE CREDITED UNDER , as well as how to pronounce it, if we read your question during the stream.

So dopple your Fingal into the Kingadome at 8pm ET / 5pm PT and we will #SeeYouInTheGizmoplex for OVERDRAWN AT THE MEMORY BANK!

But I brought a baby anteater along. I mean… JUST LOOK AT IT!!! 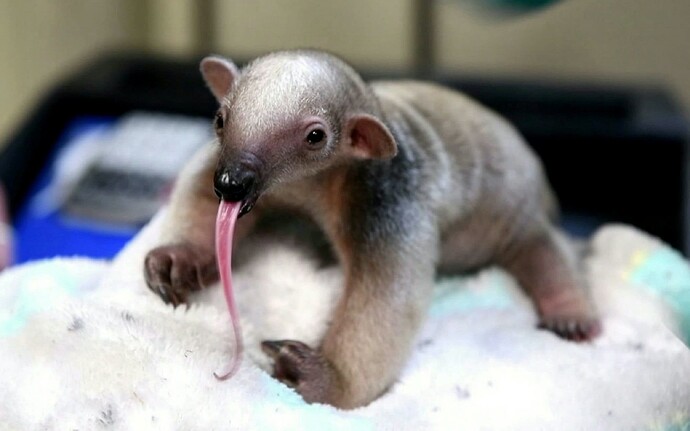 Time to bungle AND bopple the Fingal dopple, baybay!

Ugh. Responsibilities will keep me from this tonight.

I’d rather be here than scrolling up cinemas.

I’d rather be here than scrolling up cinemas

I know that this movie is given quite a bit of flak (and justly so), but… it was prescient with regards to that whole scrolling up cinemas thing.

This movie predicted streaming films, and we have to begrudgingly accept that it did.

we have to begrudgingly accept that it did

SO WATCH OUT, ANTEATERS! YOU’RE NEXT!

SO WATCH OUT, ANTEATERS! YOU’RE NEXT

I’m am so ready for a new riff-along tribute event, new short and all the extras included!

(Also, this episode is an underrated favorite of mine. It’s one of the more unique movies they ever did. I also adore the Host Segments here)

Wait. An anteater with big ears and a very long tail? That ain’t no anteater I’ve ever seen. Dat looks more like MONKE.

You know what this movie needs?

Also, this episode is an underrated favorite of mine. It’s one of the more unique movies they ever did. I also adore the Host Segments here

It’s a -smashing- episode. Season Eight was strong across the board, but that one-two-three punch of Space Mutiny, Time Chasers, and Overdrawn at the Memory Bank was fantastico.

Gotta get some tea brewed and hair washed, then I’m all in for…wait, what are we watching again?

According to the Kickstarter update, tonight’s short is Better Breakfasts USA!

Ooh, a food related short. this should be good.