I’m pondering getting some of the fancy-dancy new-fangled wireless earbuds that everyone seems to be using these days and was wondering about their general usefulness.

Those of you who have them … what do you think of them? Are they a useful tool that adds value to your day-to-day walk? Or are they a gadget that gets in the way more than it help you out and which ends up adding more hassle than value? What’s the average day like with them as part of the picture? I’m trying to decide if such a thing is worth the 200+ dollars, or if its just a gimmick/fad. Thoughts?

All I know is there’s no rule says a dog can’t play basketball!

I have Apple wireless earbuds that cost like $200 and a generic mono one-ear bud for work that cost maybe $20. And you know what? Other than one being one ear and the other being two ears, I can’t tell the difference. Don’t spend a lot.

Also, Akai used to make wired earbuds where the part you stuck in your ear was made out of the same foam stuff they make earplugs out of, so it was a great fit. If they ever make wireless versions, I’m buying.

Ear buds don’t fit my ears, at least comfortably. They’re usually way too big and either fall out or cause pain, which is why I usually wear over the ear headphones.

But, when I’m out on a run or need to listen to something without blaring it out loud, I use Aftershokz/Shokz. They’re bone conductors, meaning they rest behind your ears and conduct sound that way. Perfect for listening, but still being able to hear your surroundings.

Of course, if you’re looking to block outside noise, can’t help you much. Wired Apple buds (the ones that come included with an iPhone) are the only in-ears that I can tolerate for over 10-15min.

Ear buds don’t fit my ears, at least comfortably. They’re usually way too big and either fall out or cause pain, which is why I usually wear over the ear headphones.

My wife has exactly the same problem. She now has a wireless headband she uses.

Ditto. I’ve never been able to get any version of the Apple ear buds to stay in my ears for more than a few minutes at a time, so I think would end up with a single Air Pod in no time flat.

I find that most earbuds hurt my ear canals. I have these by Koss. They have a few different styles with these “earplug” jiggers. Mine has a volume control on the wire, to help with attenuation while I’m walking or whatever. I love that the earplug part is an actual foam ear plug, but with the sound coming out the middle. You twist them up skinny, then place in ear. The memory foam expands and just hugs your ear…which I just love! Helps keep auxiliary sounds out as well! 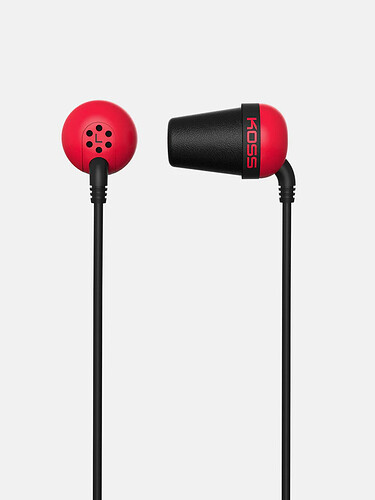 Those are like the Akai ones I was talking about above. So awesome. I wish they made them wireless.

Love the concept, almost bought wireless ones a few times, but two things keep stopping me.

The fear of losing one or both.
forgetting/being unable to charge them.

I found a pair of wired buds from Marley I find comfy, and have just just that type for most of the last few years. I have a pair of wireless headphones issued for work, so I keep them on on office days and be able to stay connected away from me desk, but I couldn’t see myself using something similar for home use.

Yeah I’m trying to get away from wired buds … which are really annoying when I’m out doing stuff.

I have wireless over-the-head Sony headphones which are great, but I’d like something a bit less ostentatious when out and about or mowing the lawn and stuff.

Another one who finds earphones uncomfortable. Regular supra-aural cans for me.
Sennheisers are usually very comfortable and mostly sound good. They also used to make the solution for those who didn’t like anything touching their ears at all (also also didn’t mind looking very silly indeed).

I have one of the less expensive sets - mine is from AUKEY - and it works fine with all of my devices including the Apple ones. The disadvantage is that there isn’t an app to configure them and they take different actions when I touch them to take them on and off, and the action is different depending on how I touch them - pause, play, forward. I haven’t figured out how to take them on and off while they’re playing without making something happen, so that’s a bit of a nuisance. I imagine the AirPods have a more polished interface.

I imagine the AirPods have a more polished interface.

Mine sure don’t. You can’t configure anything.

For some reason, my sweat and FL humidity seems to kill earbuds of all kinds, but especially wireless devices, obnoxiously fast.

After having four BT phone earpieces each die in less than 6 months, I gave up on wireless earbuds of any kind for years, and got used to knowing that even my wired Etymotic High Performance In-Ear Earphones/buds would be lucky to survive 9-12 months, and that collecting on any warranty was going to be a challenge at best.

But - A relative gave me an Amazon gift card for Christmas last year and the AirPod Pros went on a ridiculous sale… So, I’ve been using them indoors in the AC, to listen to audiobooks and podcasts while my phone is charging in another part of the room.

So, far, almost 9 months in, they’re still working. They have stayed in my ears walking around well enough. The only time I’ve had one almost get lost was when I fell asleep listening to a podcast in bed. Tossed and turned enough in my sleep to lose one of them, ended up on the floor. They sound as good as I’d expect any wireless earphones to sound? Not even close to the Etymotics, but I’ve never found anything that sounded as nice as brand new Etymotics before my perspiration killed them…

But, I haven’t tried subjecting them to my perspiration and FL humidity yet either.

So, I’d say, no, not worth full price, but if you ever have either an Amazon or Apple credit to use and they’re on sale, probably worth trying at that point.

Does that help? At all?

It does. I’m in the opposite climate - Utah - where it is dry as a bone so humidity is not generally a concern. I’m not planning on wearing them river rafting or anything where they might fall into a pool or anything. The primary use would just be average day to day stuff in an office / home / lawn sort of environment. Nothing rigorous.

My sisters gave me some relatively cheap wireless ear buds and I didn’t like them very well. They didn’t keep the connection very well and I found that I was too worried they’d fall out to use them for anything but sitting at my computer. So… yeah, I just use cheap wired ear buds when I need headphones because if I break them somehow, it’s easy to replace them and I don’t have to think about charging them up.

I got these Skullcandy ones from Walmart awhile back. Less than 20 bucks and they come with different sizes of ear gels to fit different size ears.

They work fine. Sometimes I forget I have them on, that’s how comfortable they are. I haven’t had them fall out at all, even when lying sideways on the sofa.

That’s really the way to do it if you’ve never had wireless earbuds. Get some cheap ones. See if you like them, then shop around for nicer ones if they have features you would prefer. Me, I’d probably keep the cheap ones, but I’m easy.

I bought a set of refurbished Airpods off eBay a year or so ago, they’re alright. I don’t use them super often so it wasn’t worth it to me to spend the money on a brand new pair, but I do bet they would’ve worked better for longer had I got them brand new and not refurbished, cuz mine from the get go had a little difficulty staying connected and now it’s gotten worse. So I probably wouldn’t go that route again…The shape of them is okay, but if I’m running or anything they do occasionally slip out if I’m not careful.

Yesterday a customer came into our store with a set of headphones (speakers?) that were just on a sort of necklace. I didn’t even realize what they were at first, she just started talking to someone in the middle of my helping her and it took me a sec to realize she’d accepted a call and was talking over her headset; I couldn’t hear the other caller or anything, I think she just popped one side into her ear and then popped it out when she was done. I should’ve asked her where she got them…

I’ve used them for a few years now and they are great. The time saved from untangling wires alone makes them worth it.
I don’t recommend getting anything expensive though. They are small and easily lost or broken.