So it was the Gizmonics Institute that funded research on mechanical television, VistaVision, Sensurround, the Wankel engine, the SACD, the MiniDisc and HD-DVDs! Now it all makes sense! 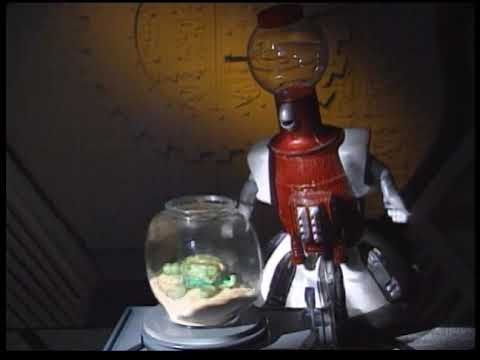 I kinda wonder how Crow feels about that whole thing…

Very perceptive. Dr. Forrester and Crow are the two sides of Trace. It’s inevitable one side of him lived the dream.

Here’s one for you all:
Did Sci-Fi era Pearl, once back in present day, ever visit CC Era Pearl who was to raise Star Baby Clayton? Maybe after Qatar kicked her out?

I always justified the set changing every season because Joel or Mike kept having to scavenge layers of the ship for invention exchanges or to build other things they wanted or to keep other parts of the ship going, so the nice and smooth bulkheads gave way to more and more exposed machinery and equipment. But it’s a show and I should really just relax.

Until the 11th season (and I haven’t fully given up the idea yet) my head canon was that after the SOL came back to earth at the end of season 10, Mike and the bots went to work at Joel’s hot fish shop.

I mean, it’s still possible given there’s apparently gonna be two sets of bots for Season 13 (maybe 3 if Joel has his own?)

Speaking of the bots though, I did have a crazy theory/story about Crow.

Remember how there was a second Crow that was left in the past in “Time Chasers”? Well, my idea was that that version of Crow eventually got out and about with his life, even meeting a younger, pre MST3K Pearl (though he took the name “Art” to potentially mitigate time paradoxes). Eventually he decided he wanted to visit his birthplace, and wandered to Gizmonics Institute. Through some accident he was sucked up and disassembled, his memory chip damaged, and his parts used to build the SOL. Joel would then build Crow back up with the damaged memory chip, hence why Crow didn’t seem fazed by recognizing Pearl and her calling him Art, as that was a part that remained relatively undamaged during the accident.

Yeah, a bit Bootstrap-ish, but it’s sci-fi goofiness I could see happening.

I think to myself "it's just a show" but I SIMPLY can't relax! MST3K Central

Maybe it’s just because I’m an avid wiki-reader for every franchise I love, but when I first got into MST3K I dove headfirst into the “lore,” so to speak-- who the characters are, what are their stories, why hosts/Mads changed, etc. I even began pondering how the Satellite of Love works or is laid out, or how and why the Bots need to intake food. Now, I know that all flies in the face of the time-honored advice of repeating to yourself “it’s just a show, I should really just relax.” And I do: I…

Wait, does that mean Bobo is a deep cover OWCA agent?

Pearl while incompetent was recognized for her failures and later given a tenured position at The Erroneous Reasoning Research Academy (or ERRA for short).

Based on the assumption that great genius can be discovered when two previously disregarded theories are merged into one, the staff of ERRA were handpicked for their ability to be mistaken; for their gifts in fallacious analysis and defective reasoning.

There were a lot of referees, television critics, and weathermen who were then re-educated in the sciences to develop extraordinary new but erroneous theories that would then be combined together to produce works of great genius. The whole idea turned out to be wrong…

It was at ERRA where Pearl developed and “perfected” Synthia.

I like to think the original Crow and Servo, maybe even Gypsy, were somehow kidnapped by Kinga due to their involvment in the original MST experiments and forced back onto the new SOL for more. Either that, or backups of their memory exist somewhere and were put into new bodies.

Well we know there are at least multiple Servos, because they were in a choir together.

I think Synthia’s boyfriend that she mentioned in the 2020 Turkey Day segments is Terry the bonehead. My logic? Their actors are married in real life!

…Then came her “Person of the Year” portrait on the cover of Time.

I’ve seen in several places around the Forum, most recently in SPOILER DISCUSSION: Episode 1308 The Batwoman, talk about the riff pacing over the years.

New theory: what if the concentration of riffs is directly proportional to the host’s survival on the SoL?

We rarely have the oxygen, water, and food supply acknowledged by either the hosts or the Mads. So, Jonah and new Bots, recently captured by new Mads, are trying not to die and therefore “overriff.” As time goes on, they realize not as many riffs are needed.

Sure, you can poke holes in this theory, but I can attempt to counter them:

What do you think, sirs?