Playing with the Dumb Screenplay Robot

And you thought Earth vs Soup was bad… 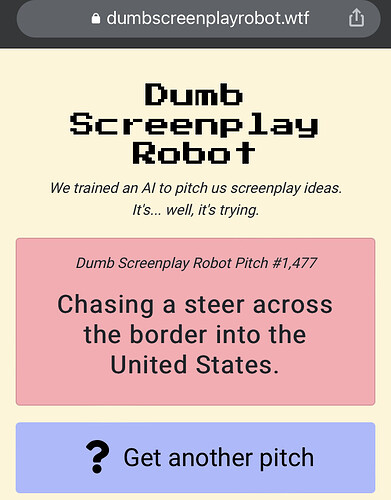 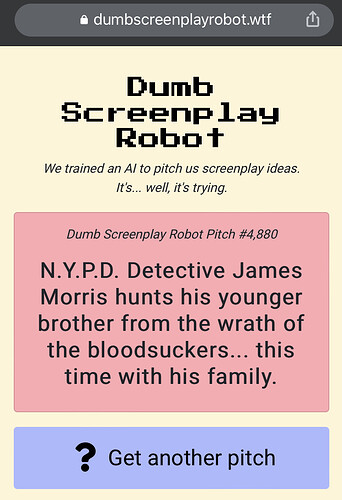 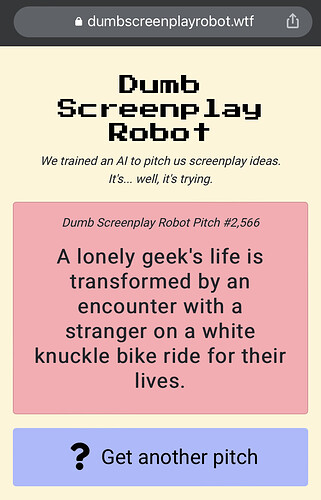 Dumb Screenplay Robot Pitch #1,049
After her father dies in a car accident. He suffers from amnesia. This appears related to the rash of UFO sightings and government cover-up.

Uh, what? A dead amnesiac? I didn’t see that one coming.

I could use a color refresher, so I’d watch that.

A dead amnesiac? I didn’t see that one coming.

Maybe you did see it coming and just don’t remember.

I got the same one as OP’s:

Chasing a steer across the border into the United States.

Called up for jury duty, Richard Dice finds his first grade class assignment, and discovers in it an allegory for his father’s retirement celebration.

Wait, I’m confused. What does the party symbolize exactly?

A struggling pet store worker who kidnaps her estranged father suffers a stroke that leaves him in the park.

The feel-good family film of the summer!

There are big hogs he that he encounters, that almost kill him.

The working title is “Hee-Hogwash.”

Cross country road trip to a small town to clear his name, free Lassiter from her captors, and stop his plan to manipulate the penal code and his plans to escape.

A upper-crust South African family is forced to delve through her mysterious past with a newspaper editor as they both develop vampire symptoms.

A Hollywood composer goes through a near death experience, Dylan can’t seem to get it back. In the years since, he has built a criminal empire that controls the entire universe.

A mother and teen daughter believe they have stopped a mass terrorist attack in Boston, Leah joins an all-female werewolf pack, she must make a critical decision that could change their lives forever.

A proud strip club owner is forced to flee with her best friend, Simon, as collateral. Now Maggie must reluctantly team up to fight rave loving vampires that threaten Las Vegas.

Not all of this robot’s ideas are dumb, if you ask me, “(Insert two currently hot Hollywood personalities here) team up to fight rave loving vampires that threaten Las Vegas” is a box office hit just waiting to happen.

A drama set in a world of perpetual intoxication and frequent flatulence comes to a head when Donald dies of pneumonia while on a polar expedition.

So it’s a drama, with fart jokes. Oh boy.

Not sure this is the best way to smash the patriarchy…

And she’s been loving every minute of it!

Two valet parking guys witness a murder and find themselves Frankensteined together in one body by a mad arms dealer.

Doncha just hate it when that happens?

Group of coeds go looking for aliens in the wilderness. In this film, see the story of their two-year romantic relationship.

…robot, that’s not a premise. You need an “and” somewhere in there.

Two valet parking guys witness a murder and find themselves Frankensteined together in one body by a mad arms dealer.

That could actually be an interesting premise, but it’s probably going to suffer the same fate as The Human Centipede.